As the scoreline suggests, the Dunedin-based outfit were full value for their win as they outscored the Blues five tries to two with Frizell leading the way with a brace of five-pointers in the opening half and another try in the second period.

The result means the Highlanders provisionally move into third place in the New Zealand Conference standings while the Blues are still languishing at the bottom of the table.

The Blues were under the cosh from the outset and conceded two tries inside the first five minutes.

From the kick off, they were soon on the back foot deep inside their 22 and after just 38 seconds Dillon Hunt charged down a clearance kick from Bryn Gatland before diving on the ball behind the home side's try-line.

Four minutes later, Frizell barged over from close quarters after the ball was taken through several phases in the build-up by the Highlanders forwards.

Lima Sopoaga failed with the conversion attempt but after adding the extras to Hunt's try earlier on, the Highlanders had their tails up with the score 12-0 in their favour.

To their credit, the Blues did not panic and after taking the ball through several phases, Jonathan Ruru saw a gap at a ruck before diving over for a deserved try in the ninth minute.

The Blues continued to control proceedings for the next 15 minutes and were rewarded with two Gatland penalties during this period which meant the Highlanders held a slender 12-11 lead.

However, the visitors finished the half stronger and in the 34th minute, Rob Thompson and Luke Whitelock combined brilliantly before Whitelock offloaded to Frizell, who went over in the left-hand corner.

Sopoaga failed with the conversion attempt but slotted a penalty in the 39th minute which gave the Highlanders a 20-11 lead at half-time.

The Highlanders were fastest out of the blocks after the restart and four minutes into the second half Frizell traded passes with Tevita Li before offloading to Kane Hammington, who crossed for the Highlanders' fourth try.

The visitors continued to dominate and Frizell crossed for his third try in the 57th minute after great work from Aaron and Ben Smith in the build-up.

The Blues showed considerable improvement on attack during the final quarter but despite being rewarded with a consolation try from Tumua Manu in the 70th minute, the Highlanders held on for the victory and condemned the home side to their 15th successive defeat to a fellow New Zealand side. 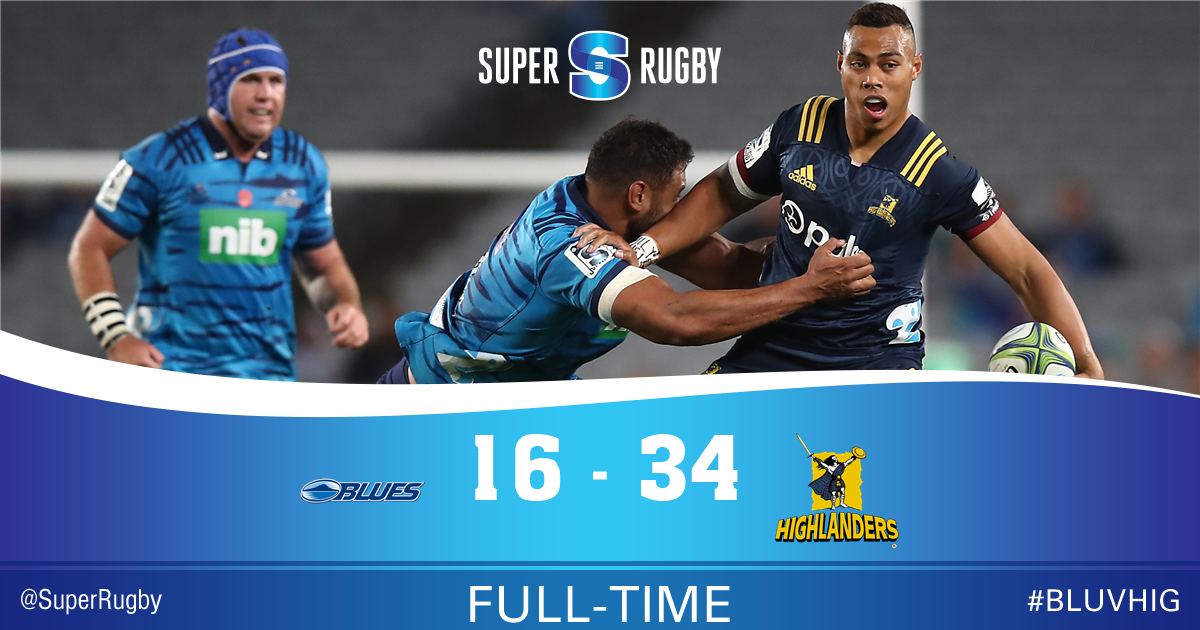