He Who Hits The First Ruck

One of the dark arts! Regardless of which team had the ball at any given hit, no players hit more effective rucks than Lucas Paulos (33) and Brendon O’Connor (30). 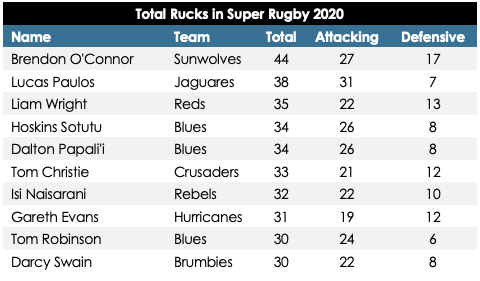 In terms of effectiveness, it was Melbourne Rebels’ duo Michael Wells and Cameron Orr who led the way for the competition in its season-opening round. Wells (12/12) and Orr (11/11) were the only players to hit more than 10 rucks and be effective with every single one of them – despite playing just 29 and 22 minutes respectively.

Making first impact was also one of Brendon O’Connor’s strengths – no player did so more times at the ruck than he did in Round 1. NSW Waratahs’ stalwart Michael Hooper was also the first man to hit the ruck on 21 occasions on the weekend, doing so from far fewer total rucks hit. 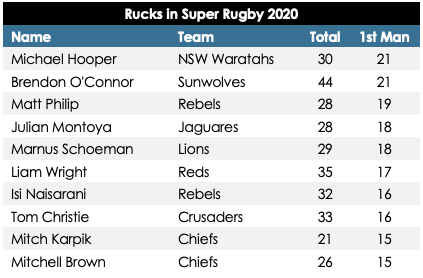 The Australian conference featured heavily in this regard. Alongside O’Connor and Hooper in the top three is the Melbourne Rebels’ Matt Philip, who hit the ruck first on 19 occasions.