The Hurricanes notched up their tenth win in a row with a hard-fought 38-34 victory over the Queensland Reds at Westpac Stadium in Wellington on Saturday.

The Reds have still not beaten the Hurricanes since 2013 and fall further adrift of the playoff places. Although they were on the losing side at the end of the day, it was the Queensland outfit’s second best performance of the season – behind their upset of the Lions.

It was a remarkable turnaround from last weekend’s horror show to the Sunwolves and even coach Brad Thorn would not have expected quite such a response. However, it was just not to be and probably would have been had they come up against any other side but the Hurricanes.

The momentum ebbed and flowed between the sides throughout the match with the final result never certain until the final whistle.

Although the Reds were the first side to get off the mark when Jono Lance registered an early penalty, it was all one way traffic with the Hurricanes dominating the early exchanges. After the ball was held up over the Reds’ try-line, the ‘Canes had a second bite at the cherry with another five-metre scrum.

Captain for the day TJ Perenara timed his pop pass expertly for first receiver Beauden Barrett to burst through from first phase and dot down despite the best efforts of numerous Reds defenders. Barrett converted his own try for the 7-3 lead.

Lance reduced the deficit to a single point with another penalty shortly afterwards – this time Hurricanes prop Jeffery Toomaga-Allen penalised for not rolling away from the ruck. However, the hosts would have their second moments later.

A patient build-up that spanned 13 phases and which combined superb interplay between backs and forwards saw Ben Lam score an excellent individual try, keeping the ball in one hand, feinting to pass while carrying a couple of Reds’ defenders with him over the try-line out on the left touchline as Barrett added the extras for a 14-6 lead after 15 minutes.

The Reds began to enjoy their most sustained spell of possession and in the 20th minute were rewarded with their first try of the match when the Tongan Thor Taniela Tupou showed exceptional strength to muscle his way past three Hurricanes’ defenders after a couple of pick-and-gos had got the visitors close to the line. Lance’s conversion cut the deficit to a single point once again.

Five minutes later, the Reds had the lead. A beautifully executed move from the lineout saw Lance’s pop pass allowing Samu Kerevi to break clean through and run 40 metres before timing the pass on his inside perfectly for Filipo Daugunu to run on to at full tilt under the posts. Lance maintained his perfect kicking record, adding the extras, for a 20-14 lead to the away side.

With five minutes to go before half-time, the Hurricanes seemed to have found their groove as they showed excellent ball retention and Sevens skills with one-handed offloads aplenty.

Beauden Barrett, who started it all winning a turnover, was heavily involved along with brother Jordie in a move that extended beyond 10 phases before Blade Thomson produced a clinical finish out on the right-hand touchline. Barrett slotted the conversion between the poles and added a further penalty after the siren as the Hurricanes took a 24-20 lead in to the interval. 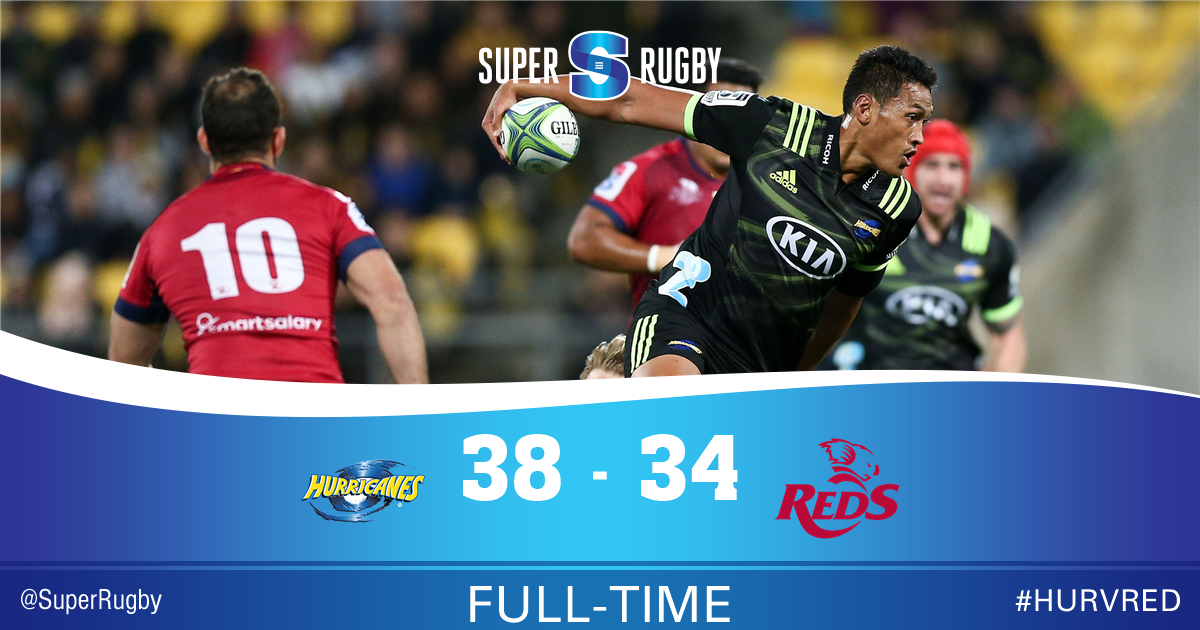 Ben Lam showed throughout the game just how hard he is to bring down and added to his first-half try with a 49th minute score. After brilliant work by the Hurricanes’ backline to isolate Lam one-on-one with Daugunu, the competition’s top try-scorer notched his 14th for the season, fending off the attentions of his opposite number with dismissive nonchalance.

Tighthead prop Tupou popped up with a bit of magic again – this time in the 53rd minute – as he first fended off Milner-Skudder in the solar plexus before showing fancy footwork to skin TJ Perenara all while hugging the left touchline and then having the skill-set to play the final pass on his inside for 18-year-old Jordan Petaia to score on his debut. Lance’s conversion made it a four-point game at 31-27.

After another long, patient build-up from the Hurricanes, the Reds eventually slipped a tackle and it was Sam Lousi who breached the Reds’ defensive line, crossing for his try of the season after Chris Eves popped up in the backline to put the lock in to space with a good pass. Barrett struck the conversion between the uprights to extend the lead to 38-27.

The momentum continued to ebb and flow and swung back in the Reds’ favour once again, Lance’s beautiful pass freeing up Samu Kerevi, who had a clear run-in to the line – the converted try cutting the deficit to four and setting up a tense finale with just over five minutes to go.