Highlanders bring Reds back down to earth in Dunedin

The Highlanders opened their Super Rugby Trans-Tasman account with an emphatic 40-19 win over Super Rugby AU champs the Reds in Dunedin.

With barely a week to recover from their Super Rugby AU victory celebrations, the Reds seemed a little lacking in energy and intensity as the Highlanders - well rested after a two-week break - emerged as convincing bonus-point winners courtesy of six tries to three.

The home side made a dream start to the match when they found themselves 7-0 up inside the first two minutes.

It was a mistake from the Reds right from the kick-off that put the home side on the front foot, as the ball was moved through the hands quickly by Jona Nareki and Sam Gilbert for Scott Gregory to score out wide.

But the Reds hit back just three minutes later with their opening try of the evening to level the scores, kicking for the corner after earning a penalty and driving it up close where scrumhalf Kalani Thomas was able to lunge towards the line and stretch out for the score.

When the Reds started to fall foul of the referee's whistle, the Highlanders were able to kick for the corner and go back on the attack, but great work from Liam Wright in the maul saw the visitors turn the ball over right on their own try-line.

The Reds were struggling to get out of their own 22, however, and despite some valiant defence it eventually took its toll as Ash Dixon picked the ball up from the back of the ruck and crashed over the line for another Highlanders try.

Having spotted that Hegarty was struggling to get much distance from his clearing kicks inside his own 22, the Highlanders continued to kick the ball at the fullback, while little kicks in behind the defence were also paying dividends.

When another well-placed kick forced Hegarty to carry the ball over the line and give away a five-metre scrum, a long pass out wide from Smith to Palelei Tomkinson saw the winger go over for the Highlanders' third try.

The Highlanders nearly scored a fourth five-pointer on the stroke of half-time as well, but a knock-on from Gregory with the try-line beckoning saw the Reds escape as it finished 21-7 to the hosts at the break.

The Reds had an opportunity to reduce the deficit early in the second half after driving it right up to the line, but the Highlanders managed to force the turnover and clear the danger.

Back came the Reds storming into the opposition 22, however, and with a penalty advantage secured, Hegarty decided to send a crossfield kick out wide where substitute Suliasi Vunivalu - on the field for O'Connor who had just failed an HIA - was able to jump highest to snatch the ball out of the air and dot down.

But the Reds undid all their good work moments later when Hegarty decided to send up an up-and-under from inside his own 22, putting the Highlanders straight back on the attack and allowing Dixon to go over for his second try of the evening from the ensuing penalty.

With just over 15 minutes to play, there was heartbreak for the Reds when a superbly worked try from Filipo Daugunu was chalked off by the TMO for a marginal forward pass in the build-up.

Instead, it was the Highlanders who put the game to bed with 10 minutes to play when they carried the ball over the line via a powerful driving maul, with substitute Liam Coltman awarded the try after a quick check upstairs.

And the hosts were soon in for their sixth try as Ngatugnane Punivai went over in the corner following another well-worked move, with Hunt nailing his fifth conversion of the night to pile on the misery.

The Reds did earn a consolation try right at the death as Vunivalu latched on to another crossfield kick to score in the corner, but it still finished as a big win to the Highlanders. 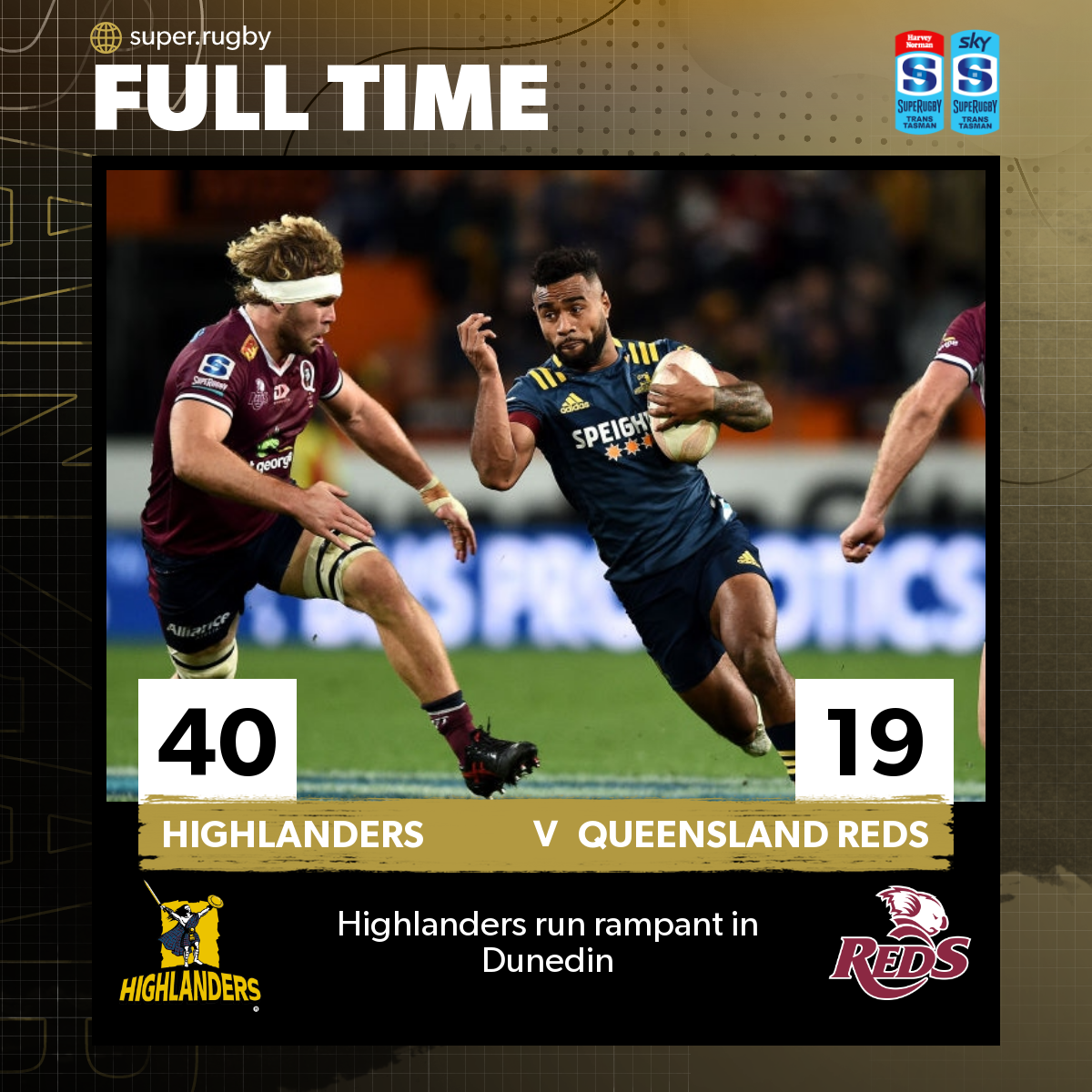