The Highlanders edged closer to securing a Super Rugby Trans-Tasman play-off spot after beating the Brumbies 33-12 in Canberra.

The men from Dunedin got the bonus point they needed as they outscored the Brumbies five tries to two, with All Black veteran Aaron Smith scoring two five-pointers and providing a couple of assists in a superb performance.

That should be enough to see the Highlanders through to the final, although wins for the Blues and Crusaders on Saturday could still see them miss out, depending on the margins of victory.

The opening minutes of the match were marked by a number of unforced errors, with neither team really able to get their attack going as a result.

The Highlanders had a chance to open the scoring when a penalty at the breakdown allowed them to kick for the corner, but the Brumbies did superbly to force the maul into touch.

The match finally ignited in the 15th minute when Brumbies flanker Rob Valetini broke straight through the Highlanders defence and charged into the 22 before the ball was shifted to the right at pace where Len Ikitau was waiting to score in the corner.

But the visitors hit back within minutes when they set up another rolling maul up close and the Brumbies found themselves unable to stop it on this occasion, leading to a try for Ash Dixon.

And the Highlanders were soon in for try number two when Mitch Hunt delayed his pass to perfection for Jona Nareki, who injected some serious pace before offloading to Aaron Smith for the score.

The Brumbies responded by giving the Highlanders a taste of their own medicine, as a driving maul forced the men from Dunedin back before Lachlan Lonergan crashed over the line for their second try of the evening.

But while the home side proved competitive in the first half, the Highlanders would ultimately pull away in the second to cruise to a comfortable victory.

Seven minutes into the second stanza, Smith struck again as he peeled away from a scrum and darted in under the posts for his second try of the night.

Ten minutes later, the Highlanders' fourth try arrived courtesy of a sublime set-piece move from a line-out, with Billy Harmon getting the score after the forwards looked to be setting up a maul only for the ball to be shifted back inside.

Shortly after the hour-mark, the match was effectively put to bed when Patelesio Tomkinson crashed over the line after running a great angle for Smith.

There were a few nervous moments for the Highlanders late on as the Brumbies threatened to score a consolation try that could have robbed them of their bonus point, but the visitors held on to secure the five points they needed. 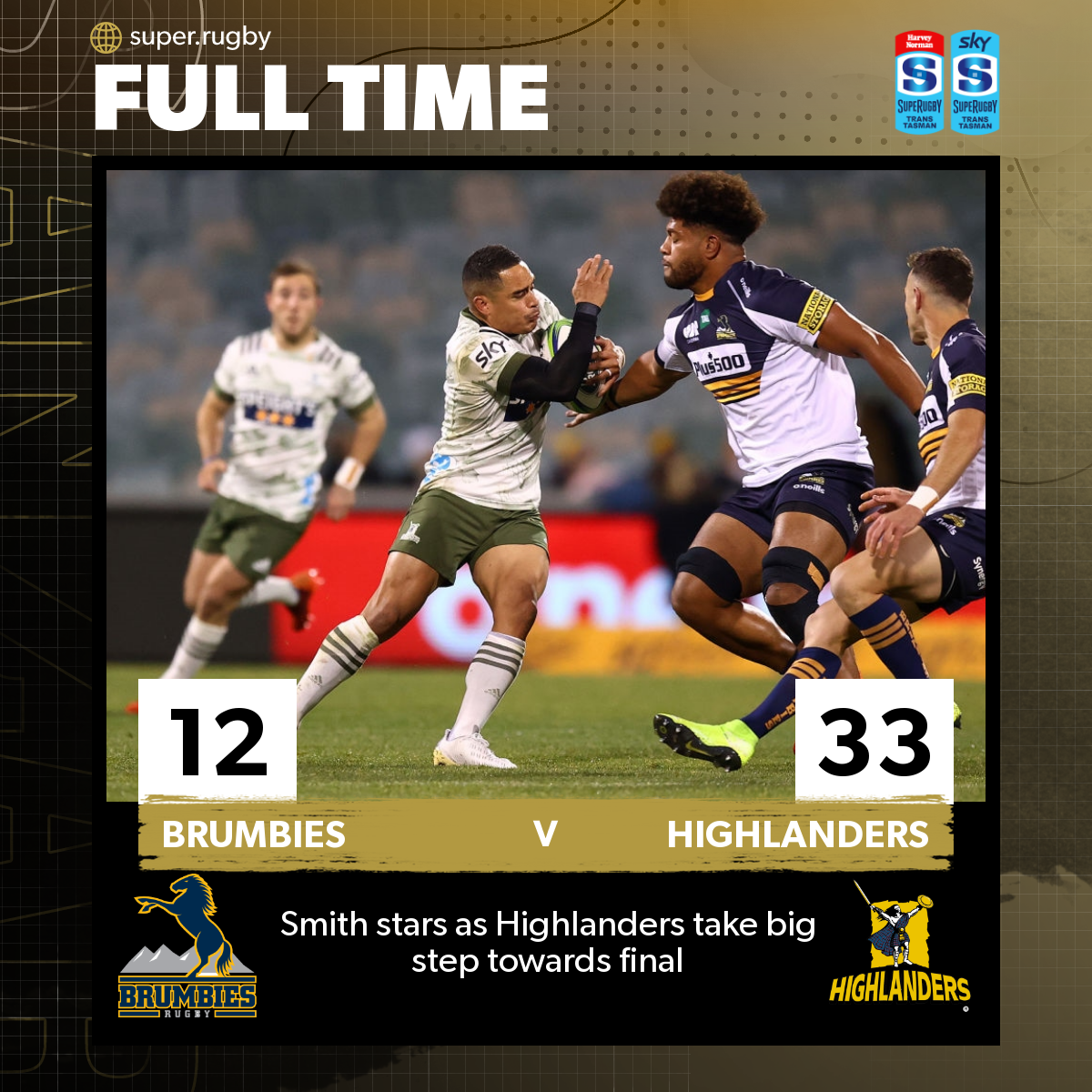