Highlanders deliver killer blow in the dying seconds over the Chiefs

There was a thrilling finish in Hamilton as the Highlanders came back to win 33-31 against hosts Chiefs in the dying embers of their Super Rugby Aotearoa clash on Sunday.

In another entertaining New Zealand derby, Sio Tomkinson’s 82nd-minute converted try sealed a superb comeback for the visitors, who were trailing for the entire game.

The @Highlanders denied the @ChiefsRugby their first Super Rugby Aotearoa win on Sunday, snatching victory right at the death courtesy of an epic comeback in Hamilton.#SuperRugby #SuperRugbyAotearoa #CHIvHIG pic.twitter.com/UsYWhU9JcY

The Chiefs were the dominant side during the opening half, and held a 24-7 lead at half-time, but the Highlanders came back strongly in the second stanza and were deserved winners in the end.

Bradley Slater (2), Lachlan Boshier and Anton Lienert-Brown crossed the whitewash for the Chiefs while Damian McKenzie succeeded with four conversions and a penalty.

The Chiefs started brightly and opened the scoring in the fifth minute when Sam Cane drew in a couple of defenders before offloading to Boshier just outside the Highlanders’ 22 and the he glided through a gap before scoring under the posts.

The home team extended their lead in the 11th minute when Lienert-Brown gathered an inside pass from McKenzie deep inside Highlanders territory before crossing the whitewash.

The Highlanders were dealt another blow soon after when Rob Thompson was yellow carded for a dangerous hit on Tupou Vaa’i and McKenzie slotted the resulting penalty which gave the Chiefs a 17-0 lead.

With a man down the Highlanders struggled and midway through the half the homeside went further ahead when Slater barged over for a well-taken try off the back of a lineout drive deep inside Highlanders territory.

Despite trailing 24-0, the visitors were slowly getting into the game and on the half-hour mark Mikaele-Tu’u scored their first try from close quarters after an extensive period camped inside the Chiefs’ 22. In the build-up, Cane had committed a professional foul on defence and was sent to the sin bin for that offence.

Despite finishing the half with 14 men, the Chiefs did well not to concede further points for the rest of the half and they had their tails up at the interval.

The hosts made a terrific start to the second half when, shortly after the restart, Slater crossed for his second try after another well executed lineout drive inside their opponents’ 22.

That did not deter the Highlanders who continued to give the ball plenty of air and in the 47th minute Hunt crossed for their second try after showing a superb turn of speed down the left-hand touchline.

The visitors continued to dominate and 10 minutes later Smith was rewarded with his try after brilliant play in which he traded passes with Manaaki Selby-Rickit in the build-up.

The men from Dunedin continued to attack and were rewarded in the 76rh minute when Nareki joined the line at pace just inside his half and made a superb line break, from just inside his half, before outsprinting the cover defence on his way over the try-line.

That set up a frantic finish and in the game’s dying moments the Highlanders were awarded a penalty deep inside the Chiefs’ half.

They kicked for touch and after initially going on the drive from the resulting lineout, the ball was taken to the backs. Smith, who was outstanding throughout, made a sniping break before offloading to Tomkinson, who scored under the posts.

Hunt’s conversion sealed a remarkable come-from-behind win for the Highlanders, who have now won two out of five Super Rugby Aotearoa games while the Chiefs’ defeat is their fifth successive one and leaves them firmly rooted to the bottom of the table. 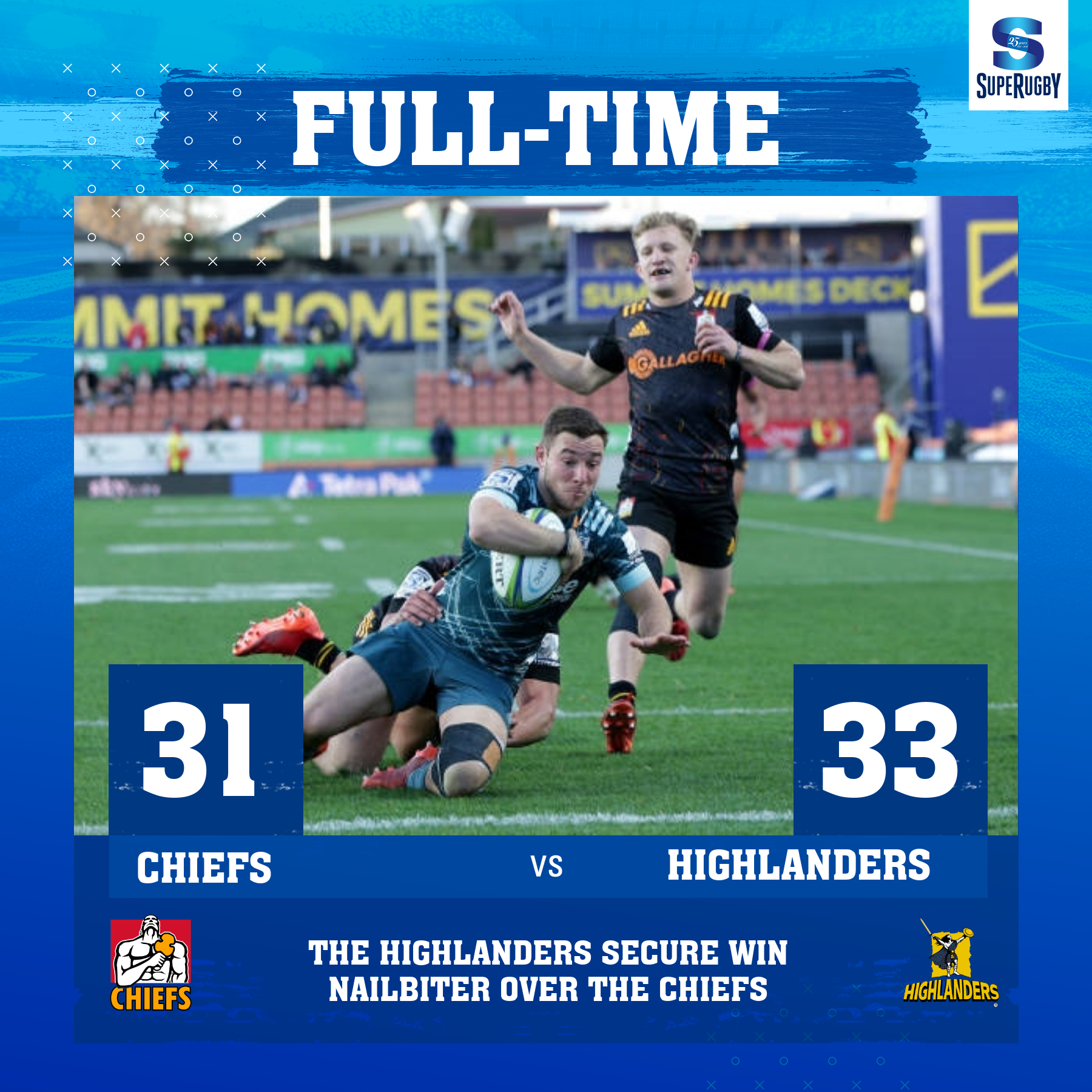