The Highlanders made a superb start to their Super Rugby campaign when they claimed a 41-34 victory over the Blues in Dunedin.

In what has become the norm when two New Zealand sides are in action, this was another pulsating encounter with outstanding attacking play throughout and the lead changing hands several times.

But it was the Highlanders who got the rub of the green in the end and they outscored the men from Auckland five tries to four with Rob Thompson and Teihorangi Walden leading the way with a brace apiece.

The opening exchanges was a frantic affair with plenty of end-to-end action although we had to wait until the 10th minute for the first points - Lima Sopoaga landing an easy penalty from in front of the posts after Michael Collins infringed at a ruck.

Five minutes later, the Blues struck back in style with James Parsons, Akira Ioane and Sonny Bill Williams carrying well before the ball was shifted to Bryn Gatland, who stepped past a couple of defenders inside the Highlanders' 22 before crossing for the opening try.

The Highlanders replied in the 20th minute courtesy of a Rob Thompson try after Aaron Smith and Lima Sopoaga did well in the build-up close to the Blues' try-line.

It didn't take long for the Blues to reply though with Sonny Bill Williams delivering a trademark one-handed pass to Rieko Ioane who also impressed with an equally brilliant pass out of the back of his hand to Matt Duffie, who cantered over for an easy five-pointer.

The topsy-turvy nature of this game continued when on the half-hour Tom Franklin threw a perfectly-weighted inside pass to Thompson close to the halfway line. Thompson still had work to do but he did well to outpace the cover defence before diving over for his second try.

Just before the interval, the momentum swung back in the visitors' favour when Akira Ioane made a break from the back of a scrum on the Highlanders' five-metre line before crashing over the try-line.

Gatland added the extras and on the stroke of half-time he added a penalty which gave his side a 24-17 lead at the break.

The thrilling nature of this match continued in the second half with the Highlanders fastest out of the blocks and they were rewarded when Siate Tokolahi crossed the whitewash after some good work between Aaron and Ben Smith in the build-up.

Sopoaga slotted the conversion which meant the sides were level at 24-24 but the Blues regained the lead in the 48th minute when Collins put Akira Ioane in the clear to cross for his second try.

Five minutes later, the Blues were reduced to 14 men for 10 minutes when Antonio Kiri Kiri received his marching orders, for a dangerous tackle on Sopoaga, and the Highlanders made them pay as Teihorangi Walden scored two tries during that period.

With the score at 38-31 in their favour, the Highlanders were in control of proceedings but the Blues did not surrender and another Gatland penalty in the 67th minute narrowed the gap to four points.

Two minutes later, the home side struck back via a penalty from Fletcher Smith and although the final 10 minutes was a frantic affair, as the Blues tried to fight back one more time, the Highlanders held on for the win. 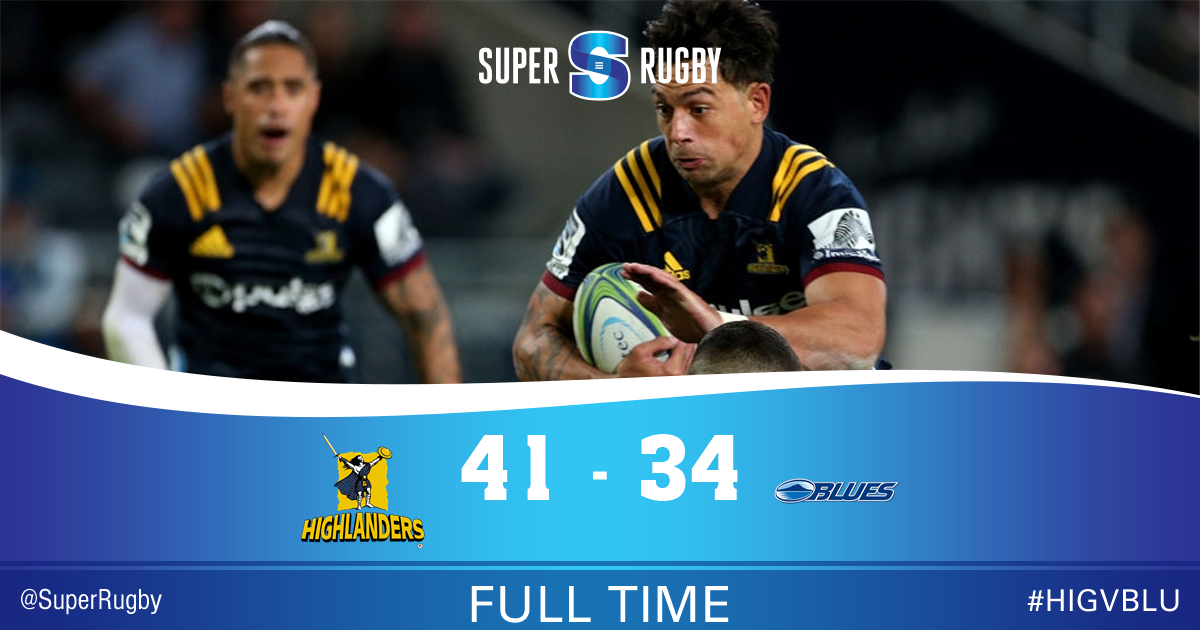