Highlanders edge out the Crusaders

The Highlanders retained their unbeaten record when they claimed a deserved 25-17 victory over the Crusaders in Dunedin on Saturday.

In another fast and frantic New Zealand derby, in which both sides stayed true to their attacking roots, the Highlanders eventually got the rub of the green and outscored the champions three tries to two.

The result means the Highlanders move to the top of the New Zealand Conference above the Hurricanes and Crusaders, who have now lost two consecutive matches which is one more than their number of defeats registered during their triumphant 2017 season.

The Highlanders had the better of the early exchanges but it was the Crusaders who took the lead courtesy of a well-worked try by George Bridge in the sixth minute.

This, after the Crusaders launched an attack from a lineout close to the halfway line. The ball was shifted to Tim Bateman, who threw an inside pass to the on-rushing Bridge, who cut the Highlanders' defence to shreds with a superb line break before diving over for the opening try.

The Highlanders did not take long to respond as four minutes later, Liam Coltman barged over for their first try from close quarters after Jackson Hemopo and Luke Whitelock impressed with strong carries in the build-up.

And five minutes later the Highlanders took the lead when Lima Sopoaga did well to step past a couple of defenders deep inside the Crusaders' 22 before crossing the whitewash.

The next five minutes was a frantic affair as the Crusaders tried to regain the lead. They spent large periods camped inside the Highlanders' half but all they had to show for their efforts was a penalty from Mitchell Hunt midway through the half after Siate Tokolahi was blown up for an indiscretion at a ruck.

The visitors continued to attack but despite creating plenty of chances, they were kept at bay by a resilient defensive effort from the Highlanders for the rest of the half.

Just before the interval, the Crusaders thought they had regained the lead when Jordan Taufua dotted down but his effort was disallowed for a handling error from Tim Bateman in the build-up.

That meant the Highlanders led 14-10 lead at half-time but two minutes after the restart they suffered a setback when Waisake Naholo was sent to the sin bin for a dangerous tackle.

That did not deter the hosts, however, and they continued to run the ball from all areas of the field. That approach paid off in the 50th minute when Aki Seiuli found himself in the clear inside the Crusaders' 22 and threw a long pass to Elliot Dixon, who crossed for the Highlanders' third try.

A response was needed from the Crusaders if they wanted to have a say in this game's outcome and they did just that when Manasa Mataele found himself in space down the right-hand touchline.

Mataele's pace took him past Dixon and he did well to put in a chip kick, which he regathered, and despite being hauled in by the cover defence, he did well to free his arms and offloaded to Bryn Hall, who cantered in for the Crusaders' second try.

Hunted slotted the conversion which meant the Highlanders held a slender 19-17 lead but the champions continued to concede penalties in their bid to haul in their opponents.

In the 65th minute, Sopoaga added a penalty after Heiden Bedwell-Curtis strayed offside on defence and four minutes later, the Highlanders pivot added another three-pointer off the kicking tee after Scott Barrett infringed at a ruck.

Sopoaga had another chance to extend his side's lead in the 76th minute, after the Crusaders were penalised for illegal scrummaging, but his shot at goal struck a post.

That did not prove costly, however, as the Highlanders held on for the win despite several further attacks from the visitors. 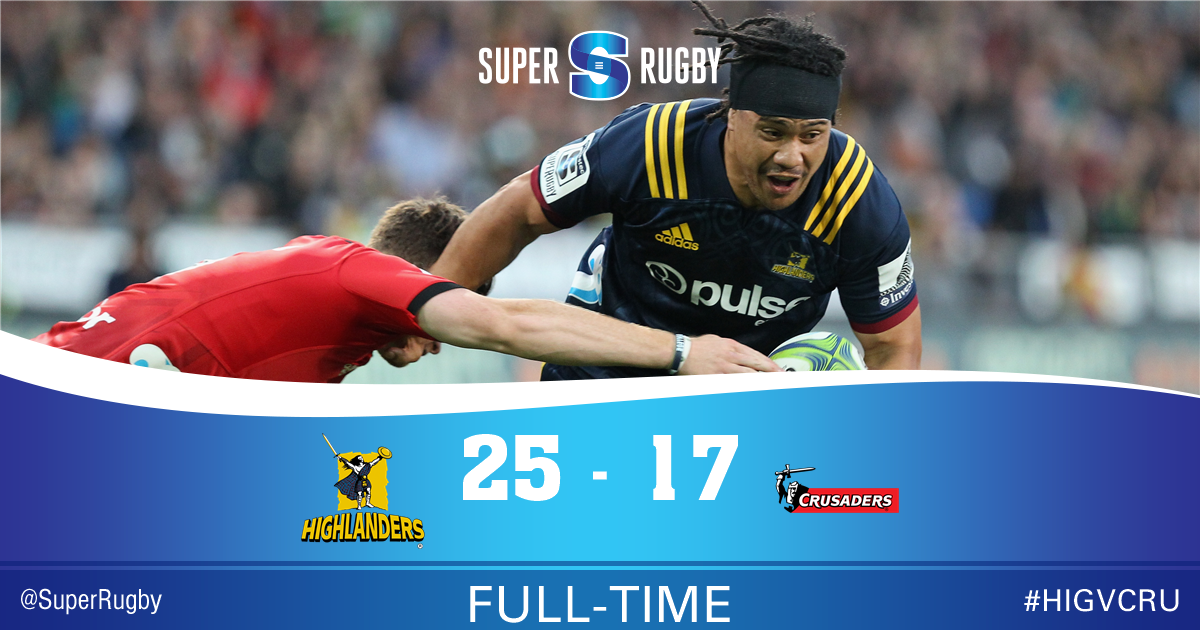