The Highlanders returned to winning ways with a hard-fought 18-15 victory over the Queensland Reds at Suncorp Stadium in Brisbane on Saturday.

After demoralising back-to-back defeats to the Sharks and Waratahs, the Highlanders will be delighted to have ended their tour on a positive note and they remain on course for the playoffs as they consolidate seventh position on the overall standings.

The Otago outfit have broken their drought at Suncorp Stadium, ending a five-match losing streak at the venue. Meanwhile, it is the first time the Reds have lost consecutive matches against the Highlanders since 2004/2005 and they are now 13 points adrift of the playoff places.

Tevita Li and Liam Squire scored for the visitors while Brandon Paenga-Amosa and Hamish Stewart replied for the hosts. In the end, a 77th-minute Lima Sopoaga penalty would separate the sides.

It was a cagey opening to the game with no points scored until the 19th minute when Sopoaga dinked over an easy penalty after the Reds were penalised for not rolling away. Jono Lance responded for the Reds three minutes later with a penalty of his own to level matters on the scoreboard after Highlanders lock Tom Franklin was caught offside at the ruck.

Soon after, the Highlanders got the game's first try when they opted for the scrum after the Reds were caught offside. The ball was switched blindside from the set-piece, where Li beat Izaia Perese in a one-on-one situation as the former was guilty of rushing up too quickly on defence, allowing Li to wriggle his way free and dot down in the left-hand corner before the cover defence could get to him.

However, the Reds would wrest back the ascendancy courtesy of their dominant scrum, which won them another penalty and they opted for the lineout from which they set up a driving maul, which was halted inches short. As the ball was recycled, hooker Paenga-Amosa powered over from close range with his pick and drive as Lance added the extras to give the hosts a 10-8 lead on the stroke of half-time.

Eight minutes after the interval, the Reds had their second. An excellent line break from Duncan Paiaáua got them in to the Highlanders' 22. After 18 more patient phases, the Queensland outfit found the piece of magic they needed to unlock the Highlanders' defence when Lance freed Kerevi who got the offload away for full-back Stewart to dive over and complete a superb backline move for a 15-8 lead.

However, the Highlanders wrested back control of the tie and beagn to exert heavy pressure on the Reds through relentless attacks. 10 minutes after Stewart's score, the Highlanders eventually broke through when replacement Squire crashed over from close range after a series of powerful carries from his fellow forwards.

The Reds would defend valiantly and prevent any further tries from the Highlanders in the face of some serious pressure. But they could not stop the Highlanders from winning a penalty at the death due to a high tackle from Izack Rodda.

Sopoaga, as he has done many times before for his side, coolly slotted the penalty over to steal victory for his side by 18-15. 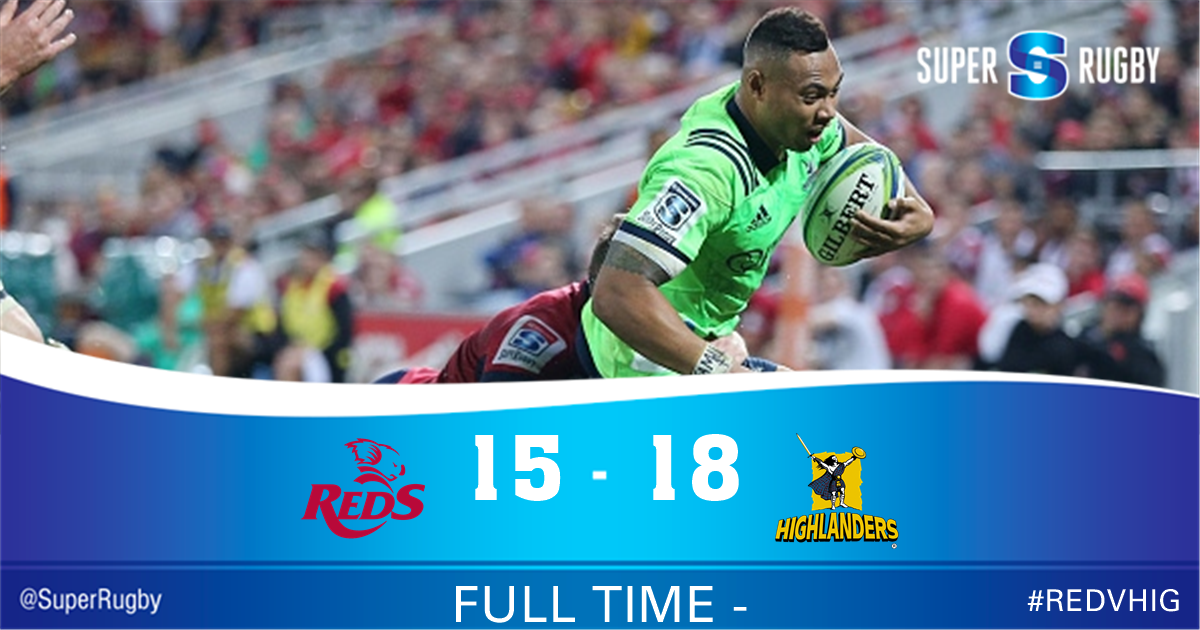