The Highlanders delivered a potential knockout blow to the Rebels' quarter-final hopes with a 43-37 victory at Forsyth Barr Stadium in Dunedin.

The Rebels will now be sweating on the Sharks-Jaguares clash, knowing that a win for the South African side will put and end to their hopes of making the playoffs for the first time in their history.

Meanwhile, the Highlanders returned to winning ways after successive 45-22 defeats to the Chiefs and Crusaders.

Tries from Waisake Naholo, Kayne Hammington, Teihorangi Walden, Tevita Li, Greg Pleasants-Tate and Tom Franklin proved too much for the Rebels, who scored through Amanaki Mafi and a Reece Hodge hat-trick.

The two fly-halves exchanged penalties early on before the Rebels got the first try of the game in the 10th minute. Highlanders prop Tyrel Lomax conceded a scrum penalty and Rebels fly-half-Reece Hodge kicked for the corner. The visitors worked the driving maul well from the resulting lineout, with Mafi crashing over at the back. Hodge made no mistake with the conversion.

The Rebels continued to press home their advantage and had their second in the 18th minute. A typically barnstorming carry from Mafi in midfield got the away side over the advantage line before superb interplay between Rebels backs Sefa Naivalu, Jack Maddocks and company released Hodge for a well-worked team try. The number ten converted his own try for a 17-3 lead.

Soon after, the Rebels were reduced to 14 men when Michael Ruru was yellow-carded for tripping Lima Sopoaga and the Highlanders duly capitalised on their numerical advantage. From turnover ball, quick hands shifted the ball to the outside and then it was all about wheels as Naholo showed some serious gas to show the Rebels defence a clean set of heels for a blistering finish. Lima Sopoaga added the extras.

Jackson Hemopo ripped the ball out of Mafi's hands and offloaded to Walden, who sold the Rebels defence a dummy before scything through the centre and offloading inside brilliantly for scrum-half Kayne Hammington, who had run a good support line. Sopoaga's conversion levelled matters at 17-17.

But the Rebels had an instant response as Hodge did excellent work in managing to intercept Walden's attempted cross-field kick, before running in under the posts for his brace. Once again, he converted his own try as the visitors took the lead.

However, the Highlanders had the last laugh of the first half. It started with Aki Seiuli's break before Sopoaga found Naholo with a cross-field kick. The winger offloaded to James Lentjes, who got the final pass away for Walden to run in for his double and complete a fantastic try. Sopoaga's conversion attempt hit the post, as the hosts went in to the interval trailing by two points at 24-22.

The opening ten minutes of the second half saw no points but in the 51st minute out of nothing, Hodge charged down rookie full-back Josh Ioane's kick to race through and grab his hat-trick for a 31-22 lead.

Hodge made it six from six with a penalty soon afterwards for a 34-22 lead as the game headed in to the final quarter.

However, as has been the pattern of the game, the Highlanders hit back with two quickfire tries as their bench made a telling impact. First, it was replacement centre Matt Faddes, who showed lovely hands to release Li - the winger doing well to prevent himself from being held up over the line.

Then, replacement rookie back Josh McKay's breathtaking break got the Highlanders deep in to Rebels' territory. From there, Daniel Lienert-Brown did well before Pleasants-Tate's pick and drive was enough to give the hosts a slender 36-34 lead.

Tom Franklin appeared to put the game out of reach with the Highlanders' sixth try when he bashed over from close range. A late Jack Debreczeni penalty did make things interesting but Naholo's massive hit on Maddocks dislodged the ball and took matters out of the Rebels' hands in their quest for the playoffs. 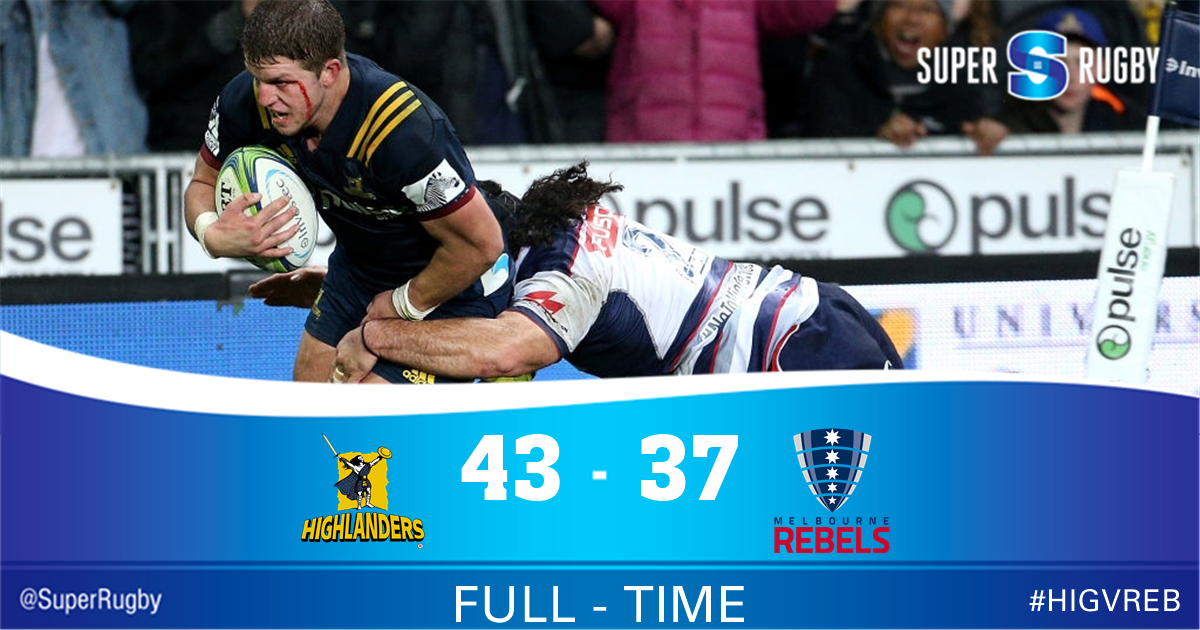