Highlanders pip Brumbies at the death

The Highlanders claimed their fifth win in a row against the Brumbies with a thrilling last-gasp 23-22 victory at GIO Stadium in Canberra on Saturday.

Hooker Folau Fainga'a grabbed a hat-trick, while Jona Nareki and Teariki Ben-Nicholas got themselves on the try column for the New Zealanders.

The Highlanders exerted the early pressure and were rewarded with an early 3-0 lead when Josh Ioane, moved to inside centre for this game, put the ball between the poles from right in front after the home side were penalised for offside.

The Brumbies scored their first try in characteristic fashion through the driving maul. Having set up the rolling maul, a couple of backs joined the party to add that extra little bit of weight with Folau Fainga'a grabbing his third try of the season - and remarkably for a hooker - his 15th in his last 20th. Lolesio missed the conversion as the score remained 5-3 to the hosts with 12 minutes gone on the clock.

Brumbies loose forward Will Miller was then penalised for offside but Ioane shanked his effort from just over 30 metres out right in front - a costly missed opportunity to take the lead for the visitors.

Three penalties in a row allowed the Brumbies to go coast to coast and set up an attacking lineout seven metres out with 13 minutes to go before half-time. From the set-piece, the visitors conceded their fourth penalty for joining the maul incorrectly with captain James Lentjes receiving a warning.

And once again the Brumbies went to their most trusted weapon with Fainga'a grabbing a brace from another expertly-worked driving maul. Lolesio's calm conversion under pressure took the hosts in to a 12-3 lead.

However, the Highlanders hit back from the kick-off with Jona Nareki chasing brilliantly to charge down Lolesio's kick and dot down. Ioane converted to cut the deficit to two at 10-12.

And Aaron Mauger's side edged in to a 13-12 lead going in to half-time courtesy of Ioane's boot after All Blacks flank Shannon Frizell, making his first start of the season, did superbly to win the turnover penalty at the breakdown.

Ioane put the Highlanders four points in front with another three-pointer almost immediately after the interval. But the visitors were dealt soon after when setback when wing Sio Tomkinson was sin-binned for leading with his shoulder in to Brumbies full-back Tom Banks.

The Brumbies failed to capitalise on the numerical advantage and were struggling to find any momentum on attack in the face of some impressive Highlanders' rush defence.

It seemed the only way they were going to break through the Highlanders' rearguard was via the driving maul and so it proved in the 68th minute with Folau grabbing another hat-trick to add to his impressive tally with replacement scrum-half Ryan Lonergan.

Iona made another costly mistake, missing a sitter of a penalty which would have tied the scores for the Highlanders going in to the final eight minutes.

Lonergan put the Brumbies six points ahead with a well-struck penalty in the difficult conditions. But from the kick-off, they tried to run the clock down inside their own 22 only to concede the penalty.

And the Highlanders took full advantage. Having kicked for the left-hand corner, the visitors took the ball out right towards the centre of the poles with replacement lock Ben-Nicholas slipping the tackle of Brumbies replacement prop Scott Sio before barging over. And Ioane landed the all-important penalty to win by a slender one point margin. 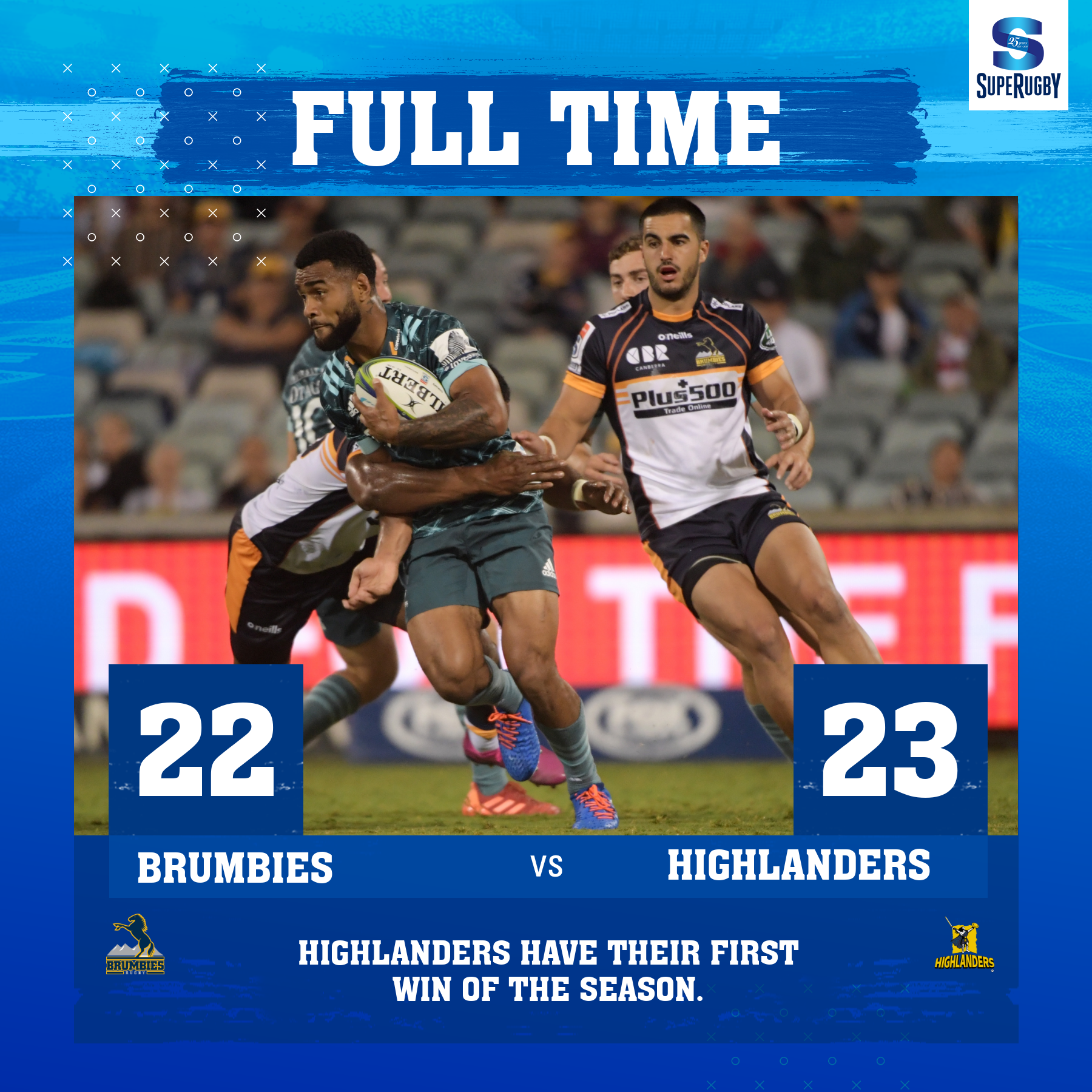