Highlanders score five tries to down ill-disciplined Blues in Dunedin

The Blues were made to pay for their lapses in discipline as the Highlanders secured a well-deserved 35-29 victory at the Forsyth Barr Stadium.

While the match was highly competitive throughout with the lead changing hands on several occasions, the Highlanders were ultimately able to pull away and hold on for their first home win of the season - thanks in part to a red card to Blues substitute Alex Hodgman late in the game.

The victory keeps the Highlanders in the hunt for a place in the final and moves them up to third on the Super Rugby Aotearoa table, just one point behind the second-placed Blues.

The Highlanders put themselves under some early pressure when a clearing kick from Mitch Hunt inside his own 22 was charged down, forcing the flyhalf to scramble back and carry the ball over the line to hand the Blues a five-metre scrum.

Luckily for Hunt, the Highlanders managed to clear the danger, but a few minutes later the Blues were in any way when they had the hosts under pressure again and scrumhalf Jonathan Ruru poached a try from nowhere by intercepting Aaron Smith's pass right inside the Highlanders' own in-goal area and touching down.

The Highlanders had a chance to reduce the deficit a few minutes later from the kicking tee when they earned a penalty at the breakdown and Josh Ioane obliged from right in front.

After a slow start, the Highlanders were starting to look more dangerous with the ball in hand, and when they earned another penalty inside the Blues 22, Smith decided to take it quickly and very nearly made it all the way to the line before a quick recycle saw the ball find Kazuki Himeno for the try.

The hosts looked certain to score again after making their way up to the Blues tryline only for a knock-on to see the chance go begging. The referee thought he saw some foul play, however, and when he sent it upstairs for a referral, the TMO spotted that Hoskins Sotutu had caused the handling error by playing the ball on the ground.

Sotutu got a yellow card for his troubles, and the Highlanders went back on the attack, leading to a simple try for Ioane after the ball was spread wide at pace, with Hunt timing his pass to perfection.

The Blues needed a response after giving away 15 unanswered points, and they found it despite still being down to 14 men, getting over the advantage line on several occasions before a well-timed pass from Black to Rieko Ioane saw the No 13 go straight through a gap for the try. Black added the extras to make it a one-point ballgame.

Moments later, the Blues earned a kickable penalty right in front and took the points on offer to retake the lead.

But the Highlanders won a turnover as the hooter sounded and set up the line-out in Blues territory, and a beautiful set-piece move worked to perfection to send Ngatungane Punivai through for the score. Ioane converted from out wide as the Highlanders took a 22-17 lead into the break.

The Blues came close to hitting back early in the second half when Caleb Clarke broke the line and nearly ran all the way for a try, but Dalton Papalii couldn't hold on to a long pass out wide after the Highlanders managed to stop Clarke with a desperate tackle near the line.

A few minutes later, it was a case of deja vu as Clarke scythed straight through the Highlanders defence again and stormed up the field towards the tryline where more desperate defence from the hosts just about managed to keep him out again.

Having twice come close to scoring without reward, the Highlanders made the Blues pay when they earned a scrum turnover in the opposition 22 and went all out on the attack, with the try eventually coming when a long, looping pass out wide found Jona Nareki who dotted down in the corner before the cover defence could arrive.

The Blues nearly hit back on the hour mark but were held up over the line, and instead it was the Highlanders who extended their lead by three points when Leni Apisai was pinged for obstruction following a chip over the top from Hunt.

The Blues desperately needed a response and they found it when Nepo Laulala bashed his way over for a try following a brutal assault on the Highlanders line. Black added the extras to bring the Blues back to within six with less than 10 minutes to play.

But moments later, disaster struck for the Blues when a TMO referral led to a red card for Alex Hodgman for a shoulder to the head of James Lentjes in the tackle.

That put the Highlanders back on the attack in Blues territory and the hosts didn't need a second invitation to deliver the killing blow as Michael Collins ran a great line to crash over for their fifth try of the evening.

There was still time for a consolation try from Sotutu just as the final hooter sounded, but while it did secure the visitors a bonus point, there was no more time to come back at the Highlanders who hung on for the win. 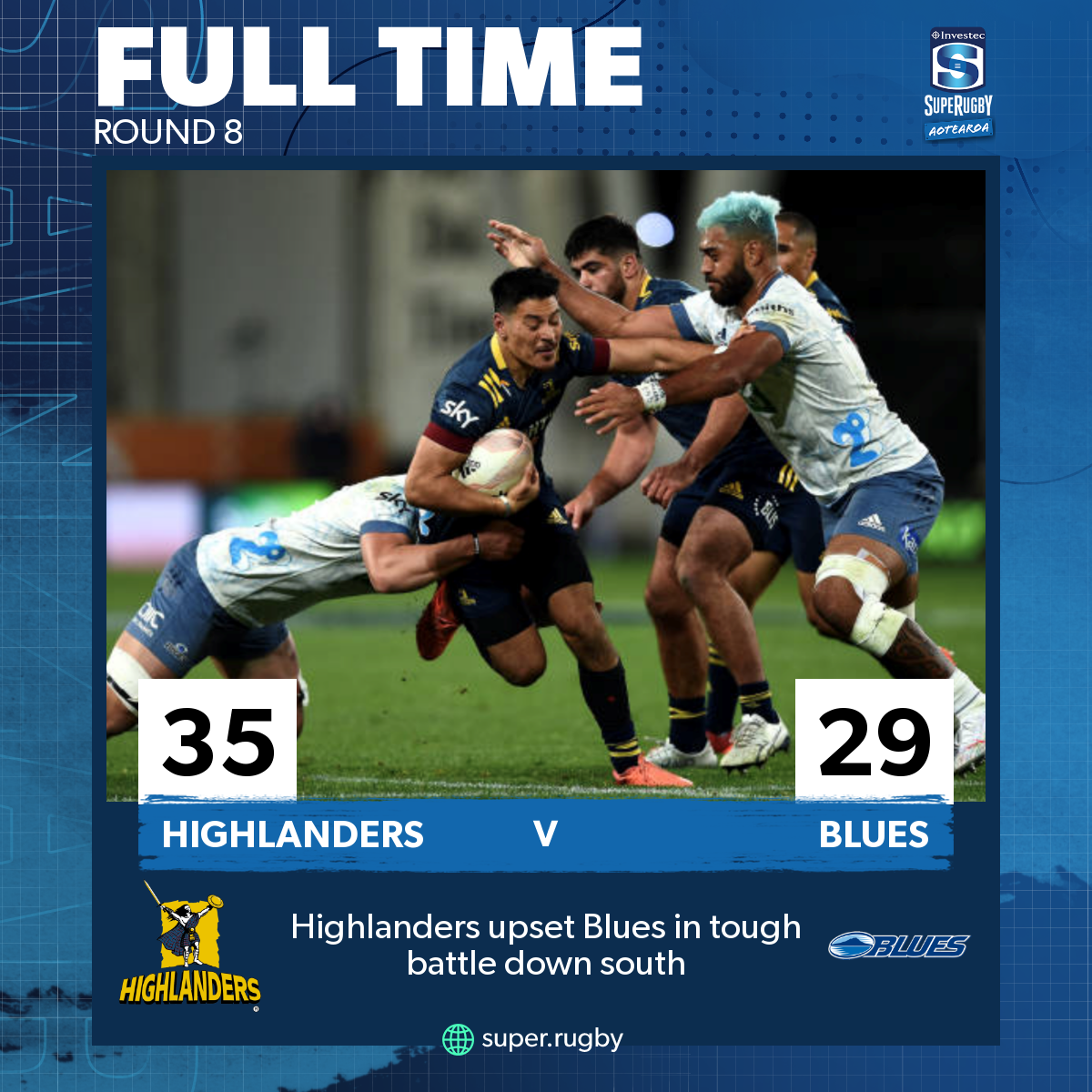