The Highlanders broke a run of seven straight defeats against the Crusaders with an incredible 33-12 victory in Christchurch.

The visitors came out swinging early and took a lead they would not relinquish for the rest of the match, despite the best efforts from the home side to mount a comeback.

It was a remarkable result for the Highlanders who had dropped six players in midweek following a team code breach but were simply the better team on the night.

The win potentially re-ignites the Super Rugby Aotearoa competition, lifting the Highlanders from the bottom of the table up to third and handing the Crusaders their first loss of the season.

After a frenetic start to the match that saw the Highlanders apply some early pressure in the opposition 22, the Crusaders nearly scored with their first real attack of the match when a perfect crossfield kick found George Bridge near the Highlanders tryline - though the winger couldn't quite hold on to it.

When the Highlanders were given an opportunity to kick at goal a few minutes later, captain Ash Dixon opted to take the points on offer and Mitch Hunt obliged.

The Crusaders nearly hit back shortly after when they made their way right up to the Highlanders tryline with seeming ease, but great work from Folau Fakatava at the breakdown saw the No 9 force the turnover.

Instead, it was the Highlanders who got another chance to extend their lead from the kicking tee when the Crusaders were pinged for being offside, allowing Hunt to put his side six points clear.

Back came the Crusaders, attacking with some intent through several phases, but the visitors' defence stood firm and kept them at bay.

Some great interplay between the Highlanders back and forwards moments later took them all the way to the Crusaders line, and after a clever inside pass nearly saw Paripari Parkinson go over, the ball was sent out wide where flanker Billy Harmon was able to step inside off his right foot and fend off a few tackles before crashing over for the try.

Hunt added the extras and then added three more points a few minutes later when the Crusaders gave away a couple more penalties under pressure, as the Highlanders opened up a surprise 16-0 lead in Christchurch.

While the Highlanders were playing superbly, making great decisions and executing at pace, the Crusaders continued to look a little out of sorts, and another attack from the men in red came to naught when they knocked on in the opposition 22.

With time running out in the first half, the Crusaders earned a penalty and set up a lineout up close. The forwards bashed their way up to the line a couple of times before Codie Taylor managed to stretch over and dot down. Richie Mo'unga nailed the conversion as the Crusaders secured a valuable seven-pointer to reduce the deficit heading into half-time.

The Crusaders came out firing after the break and only some highly committed defence from the Highlanders managed to keep them out.

The visitors weren't about to relinquish their lead without a fight and they very nearly scored against the run of play following a fantastic breakout from inside their own 22. A penalty soon followed as Hunt stretched their lead to 12.

When an errant Crusaders pass allowed the Highlanders to hack the ball into the opposition 22, an ill-judged kick from Will Jordan turned possession over right by his own tryline, where substitute Aaron Smith sent it right and left before Michael Collins went over for the try. Hunt kicked the conversion to hand the Highlanders a formidable 26-7 lead on the hour mark.

The Crusaders nearly hit back when they were carried over the line and earned a five-metre scrum, but after several resets it was the Highlanders who came away with the penalty.

Moments later, a kick from Smith was charged down to put the Crusaders back on the attack, and this time they made no mistake as they opted for a quick-tap and sent it out wide where David Havili went over for the score. Mo'unga couldn't add the extras, so the Highlanders stayed 14 points clear with 10 minutes to play.

The match was effectively put to bed six minutes from time when a desperate Crusaders side tried to run it from inside their own 22 and a short pass went astray, allowing Connor Garden-Bachop to swoop down on the ball and slide over for the try.

The Crusaders tried to finish with a flourish but it clearly wasn't their day, as the Highlanders held on to secure their biggest ever win over the 10-time Super Rugby champions. 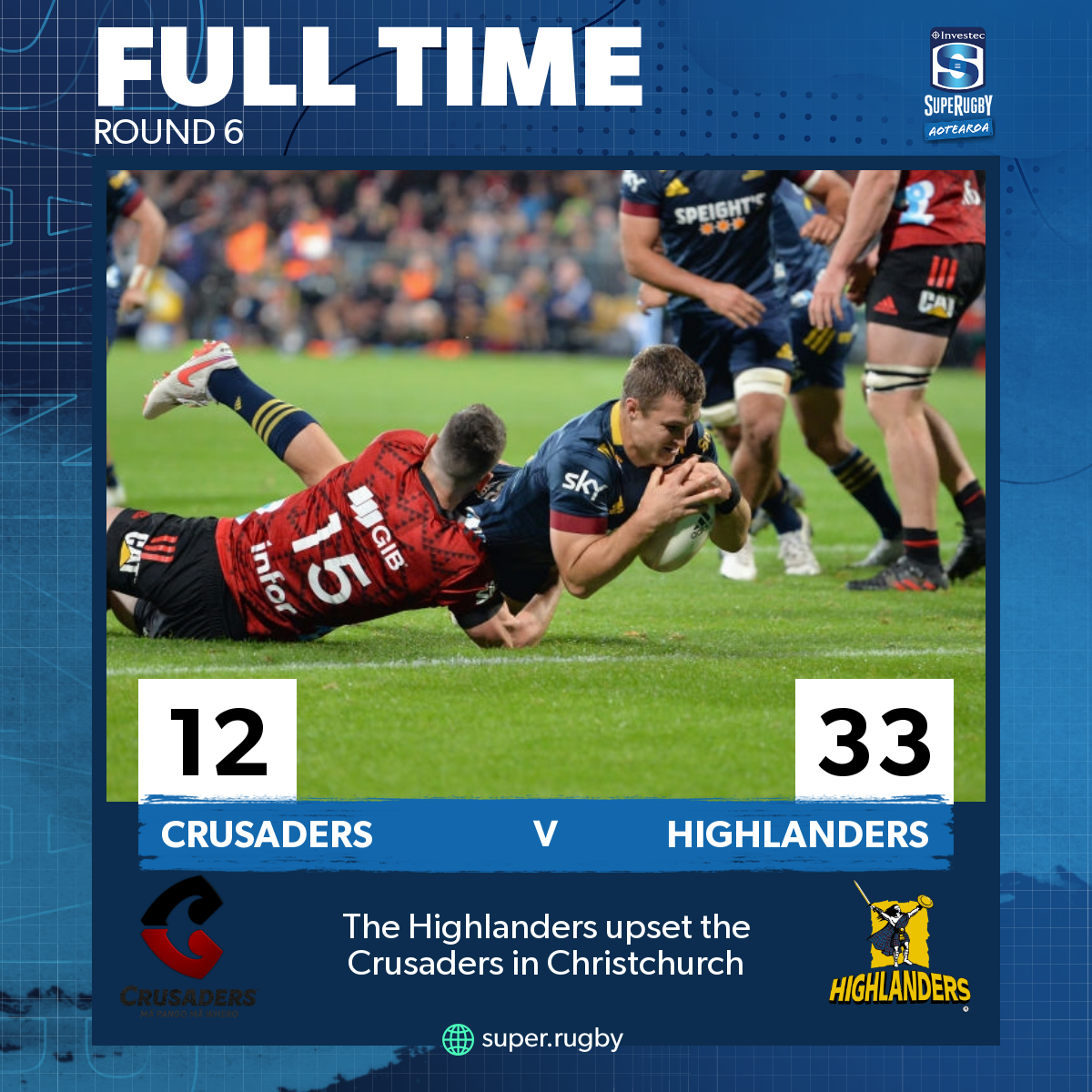