The Highlanders kept their Super Rugby Trans-Tasman play-off hopes alive with a thumping 59-23 victory over the Waratahs in Dunedin.

While the Tahs were competitive in the first half, with the lead changing hands on several occasions, the Highlanders eventually took control of the contest and the scoreline ultimately got out of hand for the visitors after the break.

It took just two minutes for the Highlanders' opening try to arrive courtesy of a sublime backline move from the back of a lineout, with Michael Collins touching down after great work from Kayne Hammington and Sio Tomkinson in the build-up.

But the Waratahs showed some fight when they hit back with a penalty from Will Harrison, closely followed by their opening try of the evening, a great individual effort from Jack Maddocks, who skinned Jona Nareki on the outside before cutting back inside Tomkinson for the score.

The Highlanders were soon back in front when a loose pass from Scott Gregory allowed Collins to break free and offload to Tomkinson for their second try - but the Tahs were able to respond again when a deadly counter-attack from a Mitch Hunt high ball saw David Porecki charge down the touchline before sucking in the defender and passing it to Mark Nawaqanitawase for the try.

The see-saw nature of the contest continued, however, as the Highlanders hit back straight away with a simple pick-and-drive from lineout ball, with prop Ethan de Groot crashing over from behind the ruck.

The Waratahs retook the lead not long after when Harrison converted his second penalty kick of the night, but the home side were soon back in front when Ash Dixon flopped over the try line from the back of a rolling maul.

Another Harrison penalty shot kept the Tahs within touching distance, but the Highlanders ensured they finished a breathless first half well on top when Jona Nareki dotted down in the corner for their fifth try after the hooter sounded.

And the men from Dunedin picked up right where they left off at the start of the second half, scoring try number six after taking full advantage of a lost Tahs lineout on their own five-metre line, with De Groot powering over from close range for his second try of the evening. Hunt nailed his fifth conversion as the hosts suddenly found themselves with a 17-point advantage.

The Tahs thought they'd hit back through Maddocks not long after, but the fullback was denied a brace when his try was ruled out for a knock-on in the build-up.

Instead, it was the Highlanders who effectively put the game to bed shortly after the hour-mark when No 8 Kazuki Himeno crashed over following another textbook rolling maul.

There was no way back for the visitors from there, and the hosts would go on to bring up their half-century thanks to two more tries from Nareki and Teariki Ben-Nicholas before the hooter finally sounded to put the Tahs out of their misery. 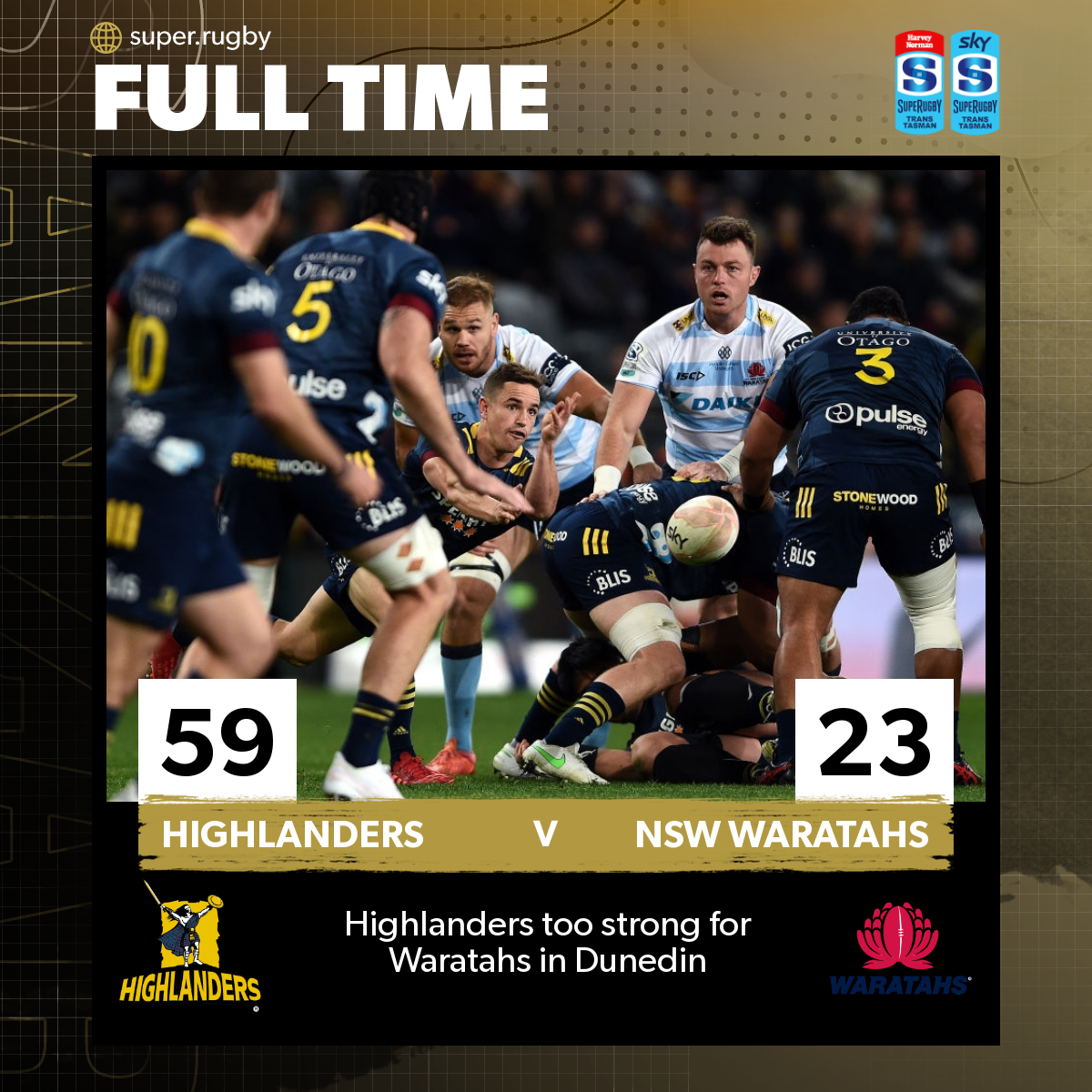