The Highlanders brought down the curtain on the Super Rugby Aotearoa competition with a 38-21 victory against the Hurricanes in Dunedin on Saturday.

In another great advertisement for New Zealand rugby, both teams stayed true to their attacking roots and there was plenty of end-to-end action for the full 80 minutes.

The match was played at a furious pace throughout and although momentum between the sides initially ebbed and flowed, the Highlanders were able to take control of proceedings in the second half.

For the hosts, Ngatungane Punivai, Ash Dixon, Michael Collins and Mitch Hunt crossed the whitewash and they also received a penalty try. Their other points came via three conversions and a penalty from Josh Ioane, with Hunt also succeeding with a conversion.

The Hurricanes opened the scoring as early as the fifth minute thanks to an excellent try from Aso. This after the Highlanders conceded a turnover deep inside their half and Barrett combined brilliantly with Booth to put the Canes on the front foot inside their opponents’ 22. The ball was taken wide to Aso, who stepped past a couple of defenders before scoring the opening try.

Barrett added the extras but five minutes later the Highlanders struck back when Punivai crossed the try-line after good work from Hunt and Ioane put the replacement wing in the clear.

The visitors stepped up a couple of gears on the attack and dominated the next 15 minutes but their execution let them down as they had tries from Aso and Reed Prinsep disallowed after indiscretions in the build-up.

That did not deter them, however, and just before the half-hour mark Jackson Garden-Bachop and Umaga-Jensen launched a counter-attack from inside their half before the latter offloaded to Booth, who scored under the posts.

Soon after, the Highlanders set up a lineout drive on the visitors’ five-metre line and were rewarded when Dixon crashed over off the back of the set-piece.

The fast-paced nature to this game continued during the closing stages of the opening half but neither team would score points during that period which meant the game was evenly poised at half-time with the sides deadlocked at 14-14.

The Highlanders came out firing after the interval and Ioane slotted a penalty in the 44th minute which gave his team the lead for the first time in the game.

The home side continued to attack and two minutes later they took the ball through 14 phases before Collins gathered a pass from Jona Nareki and rounded off under the posts.

The Hurricanes tried to fight back but continued to make mistakes and in the 51st minute they had their third try disallowed – Chase Tiatia dotted down but Umaga-Jensen was penalised for taking Collins out off the ball.

That proved costly as five minutes later the hosts were awarded a penalty try when Ardie Savea halted a lineout drive close to his tryline illegally and the All Black was also yellow-carded for his indiscretion.

With a numerical advantage, the Highlanders did not take long to capitalise and shortly after Savea’s exit Aaron Smith did well to put Hunt in the clear down the right-hand touchline where he outpaced the cover defence before crossing for his side’s fifth five-pointer.

He converted his own try which gave his side a 38-14 lead and although the Hurricanes struck back with a late try from Umaga-Jensen, it was far too little too late as the Highlanders secured only their third Super Rugby Aotearoa victory. 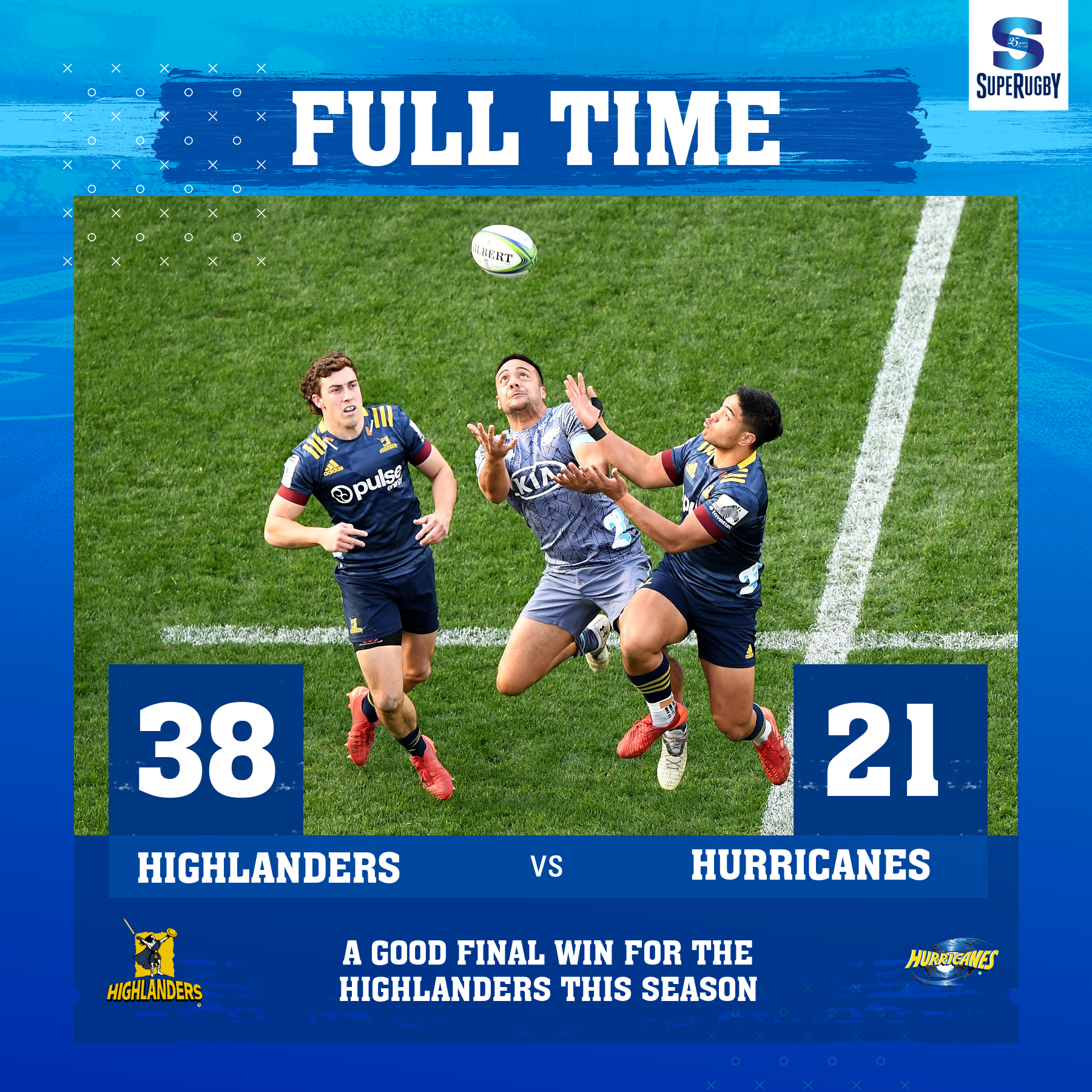