The Highlanders capped off the weekend of Super Rugby Trans-Tasman fixtures with a comfortable 42-27 win over the Melbourne Rebels on Sunday.

Leichhardt Oval in Sydney would play host to the action, where the Highlanders started and finished strong to make it three from three in the competition.

The Highlanders enjoyed a fast start thanks to the magician that is Aaron Smith. A penalty from kick-off allowed the Highlanders to set up an attacking lineout. In a planned move, Smith chipped a perfectly weighted ball over the advancing defenders which Rebels' fullback George Worth couldn’t deal with and after a juggle, outside centre Michael Collins collected and scored in just the second minute.

Hot on a counter-attack from inside their own half, the Highlanders showed how dangerous they are with ball in hand. Winger Jona Nareki initially broke a tackle to get over the advantage line, then there were some exceptional hands from Smith before the ball went wide as the backline took advantage of an overlap. Winger Patelesio Tomkinson busted one tackle and crashed over the line. Mitch Hunt converted from the touchline to snake it 14-0 after 16 minutes.

The Rebels finally struck back in the 27th minute thanks to some classic backline deception and brilliant hands in their first visit to the Highlanders 22m. Flyhalf Carter Gordan got a brilliant offload to Worth, who shovelled it onto a flying Marika Koroibete, who pinned his eras back the was tackled over the try line for their opening score.

There was a long period of good play from the Rebels, playing high tempo rugby with quick recycling. And it would pay off as South African-born prop Cabous Eloff would fight his way over the line in close quarters to score on the cusp of halftime. Matt Toomua added the extras and the players went down the tunnel with the score at 14-12.

The Rebels then hit the lead thanks to a 49m bomb from Worth early on in the second stanza.

But the Australian franchise were then reduced to 14 men after a silly error from hooker Jordan Uelese. With the Highlanders hot on attack and playing under advantage, he kicked the ball away from the back of the ruck from an offside position.

This turned out to be the beginning of the Rebels' demise...

The Highlanders took advantage immediately, calling for a scrum and bulldozing their way towards the line, leaving referee Paul Williams little choice but to award a penalty try.

And they piled on more points just minutes later after another crucial error from the Rebels. Looking to exit from deep in their half, scrumhalf Joe Powell failed to collect the lineout ball and found himself in a bit of strife. The ball was turned over and a couple of phases later, lock Josh Dickson smuggled the ball over the line.

Still having the one-man advantage and with very little on out wide, a perfect chip from Nareki was collected by the winger and he busted through Powell's tackle, cantering over the line for the third try while Uelese watched from the sin bin.

But it was the Highlanders who found themselves reduced to 14 men in the 60th minute after a series of penalties in the danger zone. They held out for a while, but replacement Matt Gibbon would get over from close range. Toomua split the uprights to make the score 35-22 with 15 minutes to play.

The Rebels almost had a runaway try when a charging Robert Leota hacked the ball forward and showed incredible pace for a big man, but he was unable to control the bounce of the ball and Nareki's simultaneous covering tackle.

The Rebels gave themselves a chance with another well-worked try, with Gordan again showing excellent hands to eventually put Koroibete away for his second. However, the bench made an impact for the Highlanders as they rumbled their way to another try and end any chance of a comeback, with Billy Harmon getting over the line for their sixth try.

Chasing a bonus point, the Highlanders attempted to sneak over one more time well after the hooter, but Smith would knock the ball on inches from the line. 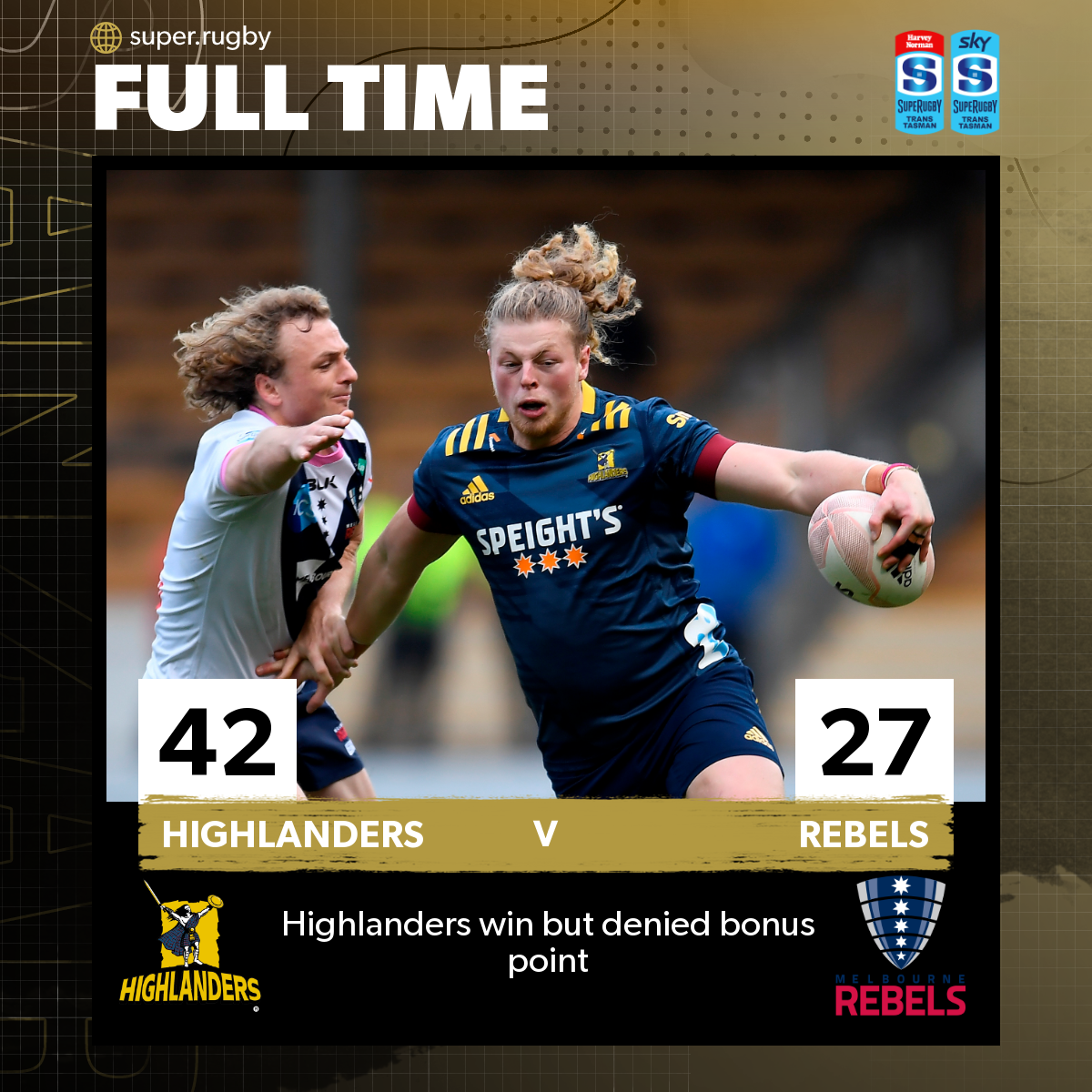