Bryn Gatland slotted a late drop goal to hand the Highlanders a thrilling 28-27 victory over the Chiefs in the opening match of Super Rugby Aotearoa on Saturday.

Gatland, a late inclusion in the matchday squad, showed maturity to land the three-pointer that denied his father Warren's side the win in Dunedin.

It looked like the Chiefs would be the side smiling at full-time when Damian McKenzie nailed a drop goal of his own to nudge them 27-25 ahead with two minutes left. However, Gatland stepped up when it mattered to return the favour and ultimately hand the Highlanders a valuable result.

The Highlanders’ other try-scorers were Ash Dixon, Sio Tomkinson and Marino Mikaele Tu’u, while Sean Wainui and Anton Lienert-Brown responded for the Chiefs.

Adding to the story was the fact Gatland was only a late call-up to the squad after the Highlanders lost flyhalf Josh Ioane to injury before kick-off, which meant Mitch Hunt shifted to number 10 and Vili Koroi came in at full-back for the match.

There was entertainment aplenty in the opening half of the game and the Highlanders went in 22-16 in front thanks to scoring three tries to the Chiefs’ one.

Hunt put them into an early lead on three minutes after the Chiefs strayed offside on defence, but the visitors did level through McKenzie six minutes later.

However, this time it was the hosts who struck back in quick time when, from a penalty to the corner, hooker Dixon powered over off the back of a driving maul.

Despite the conversion being missed, the Highlanders did build on that lead shortly after when a superb linebreak from Rob Thompson saw him over the advantage line and into the Chiefs’ 22 before he offloaded to midfield partner Tomkinson for the score. This time Hunt slotted the extra two points and suddenly they were 15-6 up.

The ebb and flow of the game continued in Dunedin when lovely hands from the Chiefs led to Wainui strolling over on the left wing, cutting the deficit to two.

Four minutes later the Chiefs hit the front again thanks to McKenzie’s boot, this after opposite number Vili Koroi was yellow-carded for a tip tackle on Naitoa Ah Kuoi. However, the Highlanders’ gamble late in the half paid off as, following a promising maul and shift of the ball, Mikaele Tu’u crossed for a key score.

The Chiefs were desperate to reduce that six-point deficit and did just that shortly after the break, McKenzie punishing them for offside as he made it 22-19.

Gatland would then turn to an experienced head as Aaron Cruden replaced Kaleb Trask at flyhalf with close to half-an-hour remaining. Liam Coltman was also a notable replacement coming onto the field for the Highlanders as the prospect of a Golden Point scenario began to increase in possibility in the opening game.

Hunt did manage to push the Chiefs back to 25-19 behind on 60 minutes, but the Highlanders’ joy was shortlived when Jona Nareki was yellow-carded two minutes later for taking out McKenzie in the air. That handed the Chiefs field position but good scrambling from the hosts foiled that attack, which rallied the crowd.

The second half did not prove quite as exciting as the first as penalties, especially at the breakdown, slowed down the game considerably.

The crowd's mood was not improved by the sight of Lienert-Brown going over on the left wing to make it 25-24 to the Chiefs. McKenzie could not convert to take his side in front, however.

The Chiefs were now very much in the ascendancy as they enjoyed the majority of possession and territory as the game went into its final stages. Cue the drama.

With just two minutes remaining McKenzie bided his time before stroking over a smart drop-goal to nudge the Chiefs in front late in the game.

But, unbelievably, the Highlanders hit back almost immediately with that drop of their own, Gatland firing over a long-range effort to deny his father’s outfit the away victory. 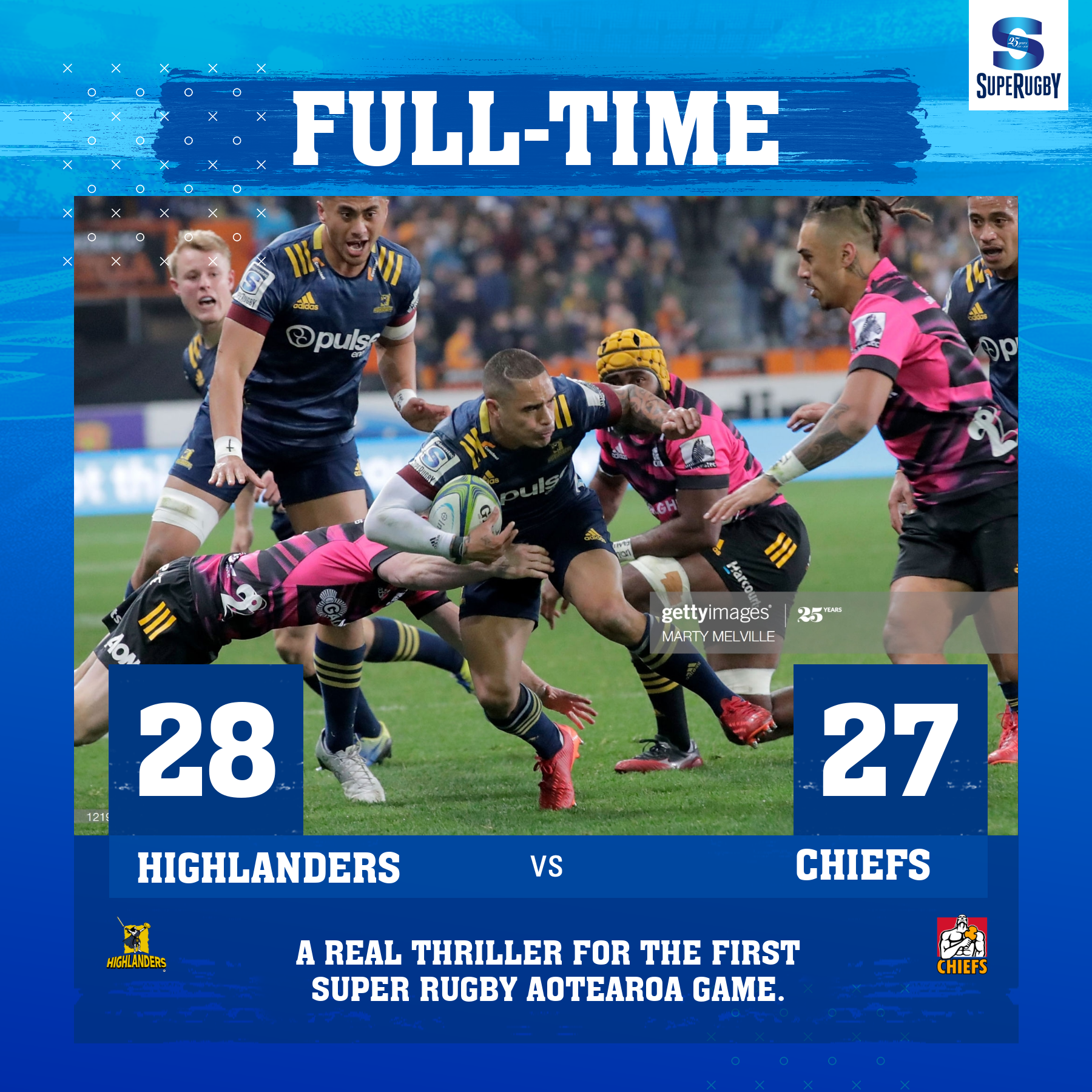