Historic win for Rebels over Highlanders

The Melbourne Rebels earned a deserved 22-28 win over the Highlanders in their Super Rugby clash at the Forsyth Barr Stadium on Friday.

The Australian side were full value for their win as they held the upper hand for most of the match and eventually outscored the Highlanders by four tries to three.

Andrew Kellaway was the Rebels’ hero as he scored a brace of tries and Bill Meakesand Anaru Rangi also crossed the whitewash while Matt To’omua added four conversions.

The match started at a frenetic pace with both sides giving the ball plenty of air and that tactic paid off for the Rebels, who raced into a 21-0 lead midway through the half.

First, Meakes showed great determination to power past three defenders on his way over the try-line in the eighth minute before the visitors increased their lead when Rangi dotted down off the back of a lineout drive deep inside Highlanders territory.

And in the 21st minute Kellaway intercepted a wayward Highlanders pass just inside his half and out sprinted Jona Nareki before crossing for his third try.

That meant the Rebels were leading 21-0 and if the Highlanders wanted something from the match they needed to get points on the board and that came shortly afterwards when the ball was shifted wide to McKay, who stepped past a couple of defenders before scoring his try.

On the half-hour mark the Highlanders were dealt a massive blow when their captain James Lentjes was forced off the field due to an horrific leg injury. The flanker suffered the injury when he fell awkwardly after being cleared out at a ruck.

Despite that setback, the home side finished the half stronger and on the stroke of half-time they narrowed the gap when Smith went over for their second converted try.

Like the first half, the Rebels were fastest out of the blocks after the interval. In the 52nd minute Kellaway intercepted a long pass from Smith close to the halfway line and raced away from the cover defence to score his second try.

To’omua added the extras which meant the visitors were leading 28-14 but the Highlanders struck back when Gregory went over for their third five-pointer in the 63rd minute.

Two minutes later, he went from hero to zero when he was yellow carded for taking out Dane Haylett-Petty in the air but shortly afterwards the Rebels were also reduced to 14 men when Meakes was also sent to the sin bin for offside play on defence close to his try-line.

Ioane slotted the resulting penalty but that would be the last time either team would score points. Just before full-time, the Highlanders were reduced to 14 men again when Nareki also received a yellow card for a similar aerial offence to Gregory’s with Haylett-Petty once again being on the receiving end of the challenge. 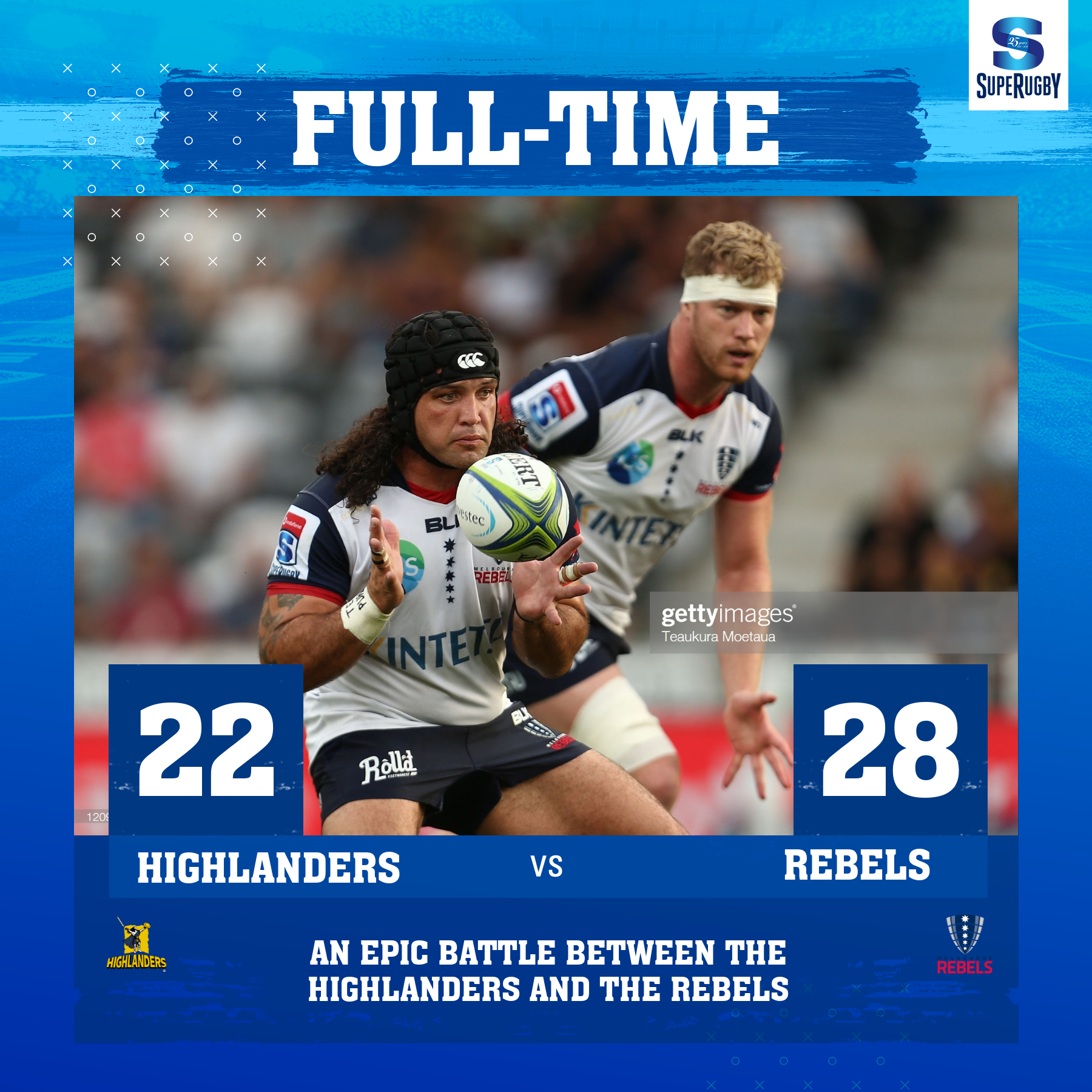