The Hurricanes progressed to the Super Rugby semi-finals with a hard-fought 32-31 victory over the Chiefs at Westpac Stadium in Wellington.

Tries from Julian Savea, Ben Lam and a TJ Perenara brace and two penalties from Beauden Barrett proved too much for the visitors, who scored through Brad Weber, Anton Lienert-Brown, Damian McKenzie and Lachlan Boshier as well as a McKenzie penalty.

The Chiefs dominated the opening 20 minutes of both halves but were thwarted by the Hurricanes’ linespeed and discipline on defence, while the hosts were the more clinical of the sides on the day.

The Hurricanes took the lead within the opening minute when Damian McKenzie tried to get a static Chiefs backline going with a long, looping pass which Julian Savea clutched out the air ahead of opposite number Shaun Stevenson before racing in under the posts to give the home side a dream start.

However, the Chiefs hit back in the seventh minute. Anton Lienert-Brown got the offload away for Nathan Harris, who made the mini-break and released Brad Weber on his inside for a clear run to the line, capping off a well-worked team try involving superb interplay between backs and forwards.

The Chiefs had an overwhelming majority of the possession and territory in the opening 20 minutes. However, the Hurricanes defended stubbornly to limit the damage. And having soaked up the pressure, the hosts would the enjoy the better of the second part of the second half and would score next in the 33rd minute.

It came after brilliant work from Ngani Laumape to hold up an opposition player five metres from the Chiefs try-line, creating the maul and winning the scrum penalty for his side in a wonderful position. From the resulting set-piece, Perenara got over with a trademark sniping break as the hosts took a 17-10 lead in to the interval.

11 minutes after the half-time break, Charlie Ngatai’s kick held up in the breeze and was pounced upon by the chasing Lachlan Boshier, who went on a bullocking 40-metre run, shrugging off a couple of defenders, before being halted five metres short. The ball was shifted out to the left where Lienert-Brown had numerous options on the overlap, but finished the job himself, as Damian McKenzie levelled matters at 17-17 after 51 minutes, setting up a tense final thirty minutes.

Just when the Hurricanes needed a response, one of their big players rose to the occasion in the 62nd minute when the talismanic Perenara, went over for his brace from first phase with the sniping dart in identical fashion to his first.

Soon after, Alamailo was penalised for a deliberate knock-down and was lucky to escape the yellow card. However, the hosts would capitalise from the resulting scrum, spreading the ball out to the left wing, where Lam finished an incisive backline move on the overlap for a 32-17 lead

The visitors hit back with two late tries when Solomon Alamailo went on a scintillating break and delayed the pass expertly for McKenzie, who ran a great support line to dot down before Lachlan Boshier powered over after a series of powerful carries from the forwards.

But although the Chiefs hit back with two late tries, it wasn’t enough to overturn the 15-point deficit as the Hurricanes won by just the one point – 32-31. 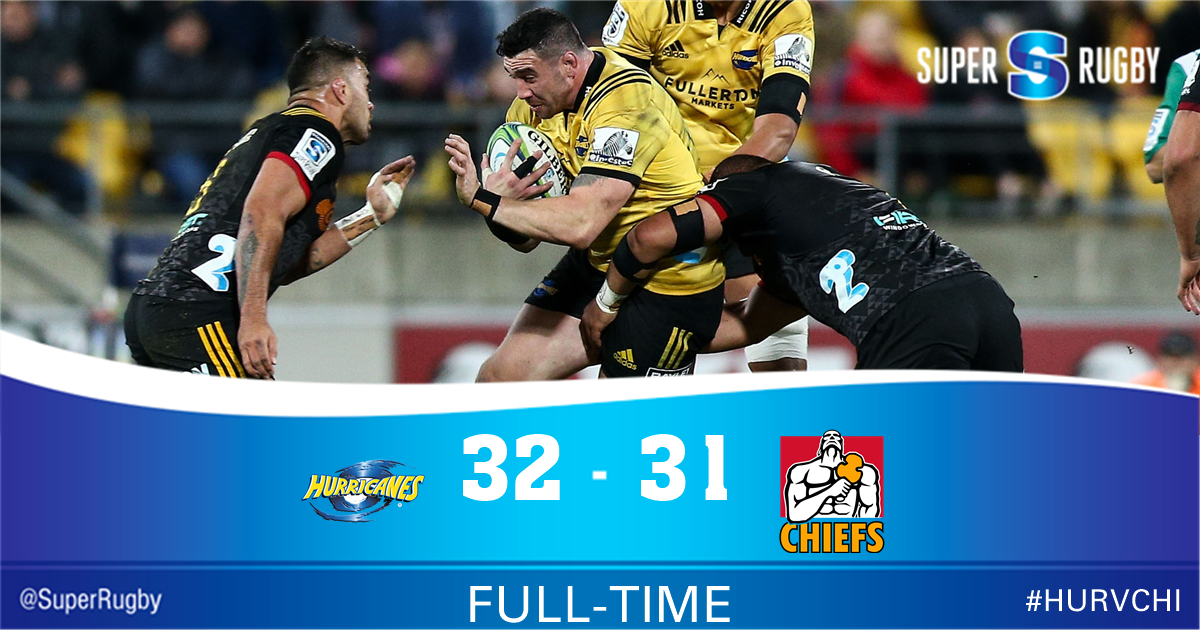