Hurricanes blow away the Chiefs

Despite playing with 14 men for the final 15 minutes, the Hurricanes were too good for the Chiefs, winning 25-18 in their Super Rugby Aotearoa clash in Hamilton on Sunday.

With both sides being winless ahead of this match, there was plenty at stake but the Hurricanes were deserved winners in the end as they outscored their hosts three tries to two despite the men from Wellington playing most of the second half with 14 men after Scott Scrafton received two yellow cards.

Kobus van Wyk (2) and Du’Plessis Kirifi scored tries for the Hurricanes and Jordie Barrett finished with a 10-point haul courtesy of two conversions and as many penalties, with his second three-pointer proving to be the highlight of the match as he slotted it from 58 metres out.Canes

For the Chiefs, Lachlan Boshier crossed the whitewash and they were also awarded a penalty try while Damian McKenzie succeeded with two penalties.

The Hurricanes were fastest out of the blocks and opened the scoring as early as the fifth minute when Van Wyk cantered in for a five-pointer after gathering a long pass from Barrett deep inside the Chiefs’ 22.

The next 10 minutes was a frantic spell as both sides ran the ball from all areas of the field but despite their attacking endeavour, the teams committed several unforced errors which meant there was little interesting to report during that period.

In the 17th minute, the Chiefs opened their account courtesy of a penalty from McKenzie after a Kirifi infringement on defence.

Although the next 20 minutes was characterised by plenty of end-to-end action, the sloppy nature to this game continued and although both sides spent time inside their opponents’ 22, neither team added to their points tally.

The Hurricanes eventually extended their lead when Barrett slotted a penalty in the 36th minute and shortly afterwards Kirifi crossed for their second try after gathering a pass from TJ Perenara close to the home side’s try-line.

Barrett’s conversion attempt was successful and on the stroke of half-time he slotted his monster penalty which gave the visitors a comfortable 20-3 lead at the interval.

Shortly after the restart, McKenzie added his second penalty after James Blackwell infringed at a ruck and the Chiefs received a shot in the arm in the 50th minute when the Hurricanes were reduced to 14 men after Scrafton received his first yellow card for illegal play at a lineout inside his 22.

The Chiefs did not score points during Scrafton’s initial stint on the sidelines and on the hour-mark the Hurricanes went further ahead when Van Wyk scored his second try after good work from Jamie Booth and Barrett in the build-up.

In the 65th minute, the game’s complexion changed when Scrafton received his second yellow card, when he prevented McKenzie from scoring a try after the All Black took a tap penalty deep inside Chiefs territory.

Scrafton’s indiscretion also resulted in a penalty try for the Chiefs and the home side spent most of the latter stages of the half camped inside the Hurricanes’ half of the field.

They were rewarded in the 77th minute when Boshier rounded off a flowing move in the left-hand corner but despite finishing stronger, they could not haul in their visitors who held on for their first win of the competition. 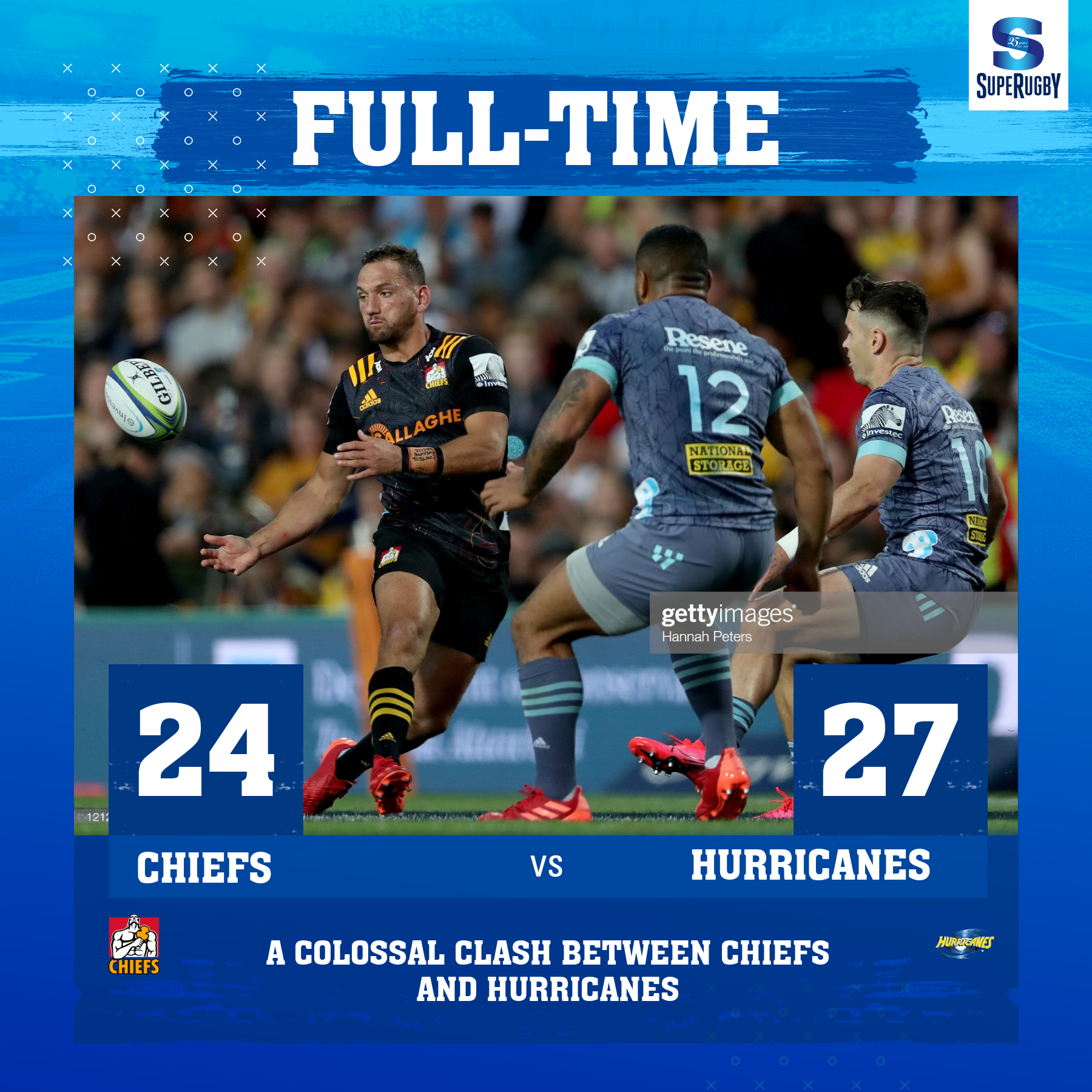