A converted try from Ngani Laumape in the final play of the game helped the Hurricanes edge out the Sharks 38-37 in Napier on Friday.

Both sides scored four tries apiece and although the Hurricanes were trailing for the entire second half, Ihaia West held his nerve with the conversion at the end which secured the result for his side.

The win consolidates the Hurricanes' position at the top of the New Zealand Conference standings while the Sharks provisionally move into second spot on the South African Conference table although that situation could change if the Stormers beat the Lions in Johannesburg on Saturday.

The Sharks were fastest out of the blocks in Napier and opened the scoring in the fifth minute when Robert du Preez kicked a penalty after the Hurricanes were blown up for offside play inside their 22.

The home side were slowly gaining the upper-hand, however, and were rewarded with their opening try in the eighth minute when, from a lineout on the Sharks' 22-metre line, TJ Perenara, Laumape and West combined brilliantly to create space for Jordie Barrett, who dotted down.

The Hurricanes continued to dominate and in the 16th minute West turned provider again when he managed to get a pass, out of the back of his hand, to Laumape who cantered in for an easy five-pointer.

The Sharks were under the cosh but launched a gallant fightback and scored two tries in quick succession midway through the half. The first one came in the 21st minute when, after taking the ball through several phases in the build-up, Lukhanyo Am stretched over the try-line for a deserved five-pointer.

And shortly afterwards, Louis Schreuder caught the Hurricanes by surprise when he attacked from a scrum on the home side's five-metre line before crossing the whitewash.

Du Preez converted both tries which gave the visitors a 17-12 lead but the Hurricanes struck back against the run of play when Vince Aso scored their third try in the 31st minute. The Hurricanes were initially under pressure inside their 22 but a clever crossfield kick from West was gathered by Aso just outside his 22 and with the Sharks' backs lying flat in an attempt to halt the attack, Aso did well to outsprint the cover defence before scoring under the posts.

West's conversion made it 19-17 to the Hurricanes but the Sharks regained the lead in the 34th minute when Du Preez slotted his second penalty.

The visitors continued to attack and extended their lead shortly before the break when Tera Mtembu and Lwazi Mvovo exchanged passes before Mtembu found Tendai Mtawarira, who was stopped close to the Hurricanes try-line. The ball was recycled quickly and Am did well to dive over for his second try despite the attentions of Barrett. 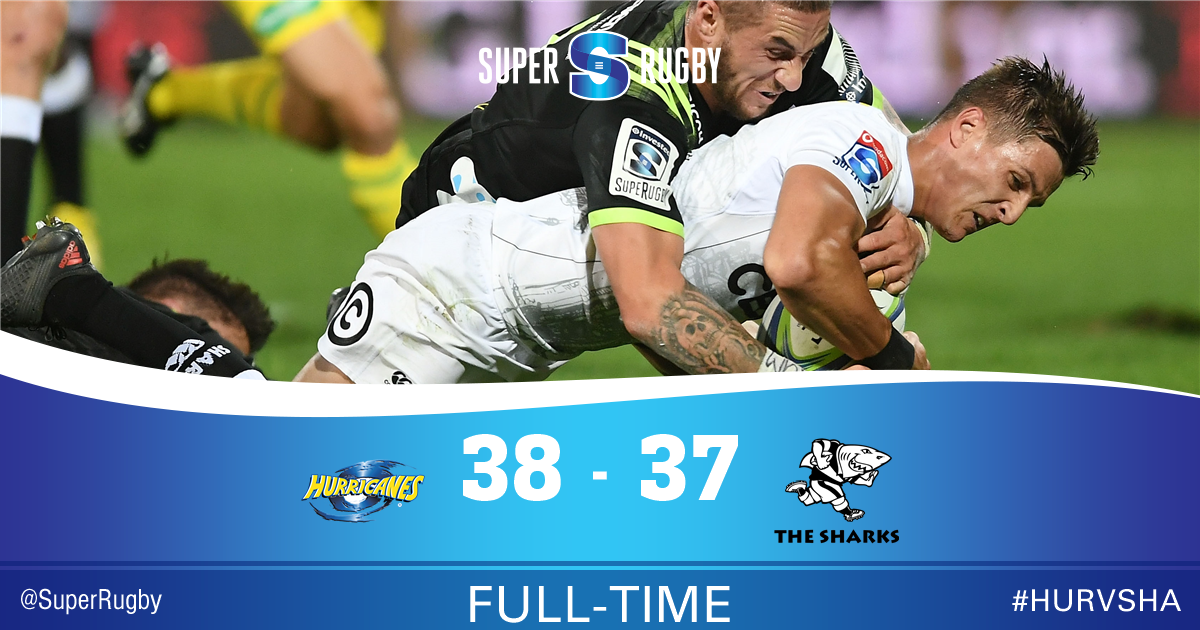 Du Preez added the extras which meant the Sharks led 27-19 as the teams changed sides at half-time.

The second half was a more subdued affair as both sides were more resilient on defence. Two further penalties from West early in the half meant the Hurricanes were trailing by two points but Du Preez also added a three-pointer off the kicking tee in the 55th minute which gave the Sharks a 30-25 lead.

West landed another penalty in the 72nd minute but despite holding a slender two-point lead, the Sharks stayed true to their attacking roots and were rewarded a minute later when Tyler Paul crossed for their fourth try, from close quarters.

Du Preez's conversion made it 37-28 to the visitors but West reduced the deficit when he slotted another penalty in the 78th minute.

The closing stages was a tense affair as the Hurricanes were camped inside the Sharks' 22 and the visitors' cause was not helped when Franco Marais was yellow carded for a cynical foul on defence.

The Hurricanes made full use of their numerical advantage and four minutes after the hooter, they managed to create an overlap and Laumape rounded off before West stepped up to slot the match-winning kick.