In a fast-paced encounter, the 2016 champions eventually got the rub of the green and outscored their visitors three tries to one and Jordie Barrett contributed 10 points courtesy of two penalties and two conversions.

The result means the Hurricanes move to the top of the New Zealand Conference table and the overall standings, while the Chiefs are still in third place in their country’s conference and fifth overall.

As expected, both sides gave the ball plenty of air and in the seventh minute, Ngani Laumape set off on a run from the halfway mark. He advanced up up the Chiefs’ 10-metre line where he offloaded to Ben Lam, who beat three defenders before crossing for the opening try.

Jordie Barrett added the conversion before Damian McKenzie reduced the deficit courtesy of a penalty in the 11th minute. In the 15th minute, the Chiefs’ pack were penalised for an indiscretion at a scrum and Jordie Barrett slotted the resulting penalty to give the home side a 10-3 lead.

Shortly afterwards, there was a long stoppage in play for a serious leg injury suffered by Aidan Ross, who was eventuslly replaced by Karl Tu’inukuafe.

The next 20 minutes was a frantic affair as both teams tried to gain the ascendancy but neither side managed to score any points during this period. 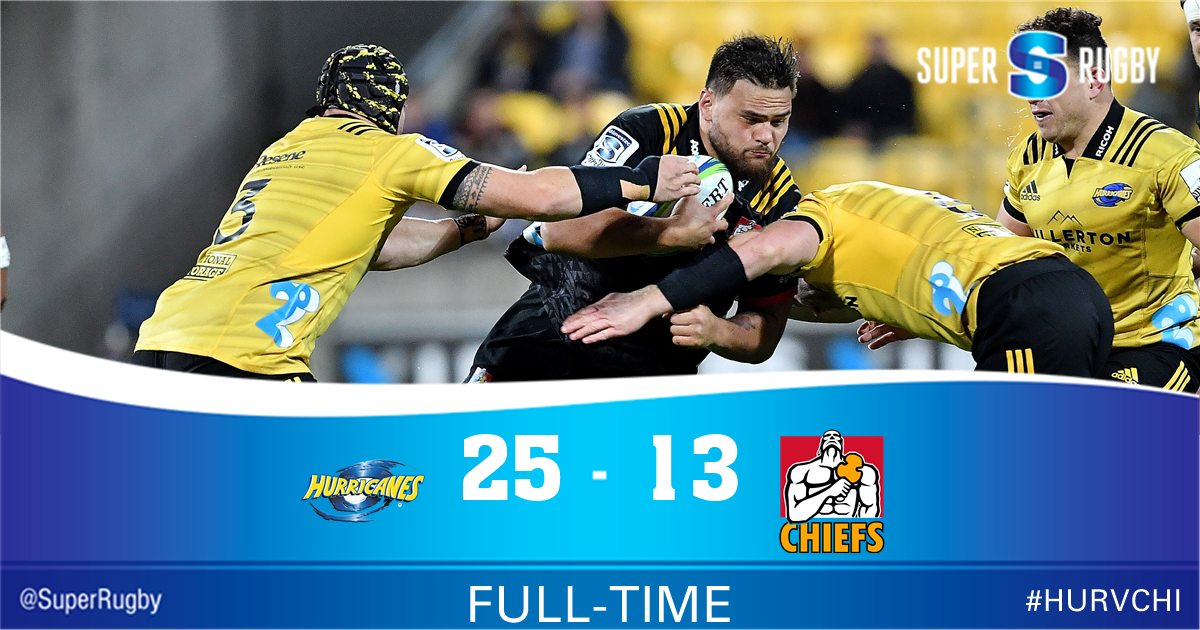 The Hurricanes came close to scoring in the 25th minute when from a quick throw-in at a lineout, inside their half, Lam gathered and set off on a 50-metre run before the ball was shifted to Jordie Barrett, who knocked on ten metres from the Chiefs try-line.

The visitors had a chance to narrow the gap in the 25th minute when the Hurricanes were blown up for illegal scrummaging but McKenzie’s penalty attempt was off target.

On the stroke of half-time, he made up for that miss when he landed the three-pointer from the kicking tee after the Hurricanes strayed offside on defence inside their half.

The home side made a terrific start to the second half when, three minutes after the restart, Beauden Barrett left his stamp on this match with a superb try. This, when he gathered a loose ball midway between the Chiefs’ 22 and the halfway mark and set off towards the visitors’ try-line. He still had work to do but did well to stab a grubber kick through before diving onto the ball behind the whitewash ahead of Brodie Retallick.

And shortly afterwards the older Barrett brother turned provider when he launched an inch-perfect crossfield kick which Laumape gathered deep inside the Chiefs’ 22 before crossing the whitewash.

The Chiefs did not take that lying down and with the Hurricanes leading 22-6, the visitors upped the ante on attack. They were eventually rewarded on the hour-mark when Lachlan Boshier rounded off in the left-hand corner, after the ball went through several pairs of hands in the bulid-up.

McKenzie held his neve to slot the conversion from close to the touchline and although the Chiefs tried desperately to narrow the gap in the final quarter, the Hurricanes did well to keep them at bay with a solid defensive effort and sealed their win when Jordie Barrett added his second penalty with the final act of the match.