The Hurricanes got their campaign back on track when they beat the Jaguares 34-9 in their Super Rugby encounter in Buenos Aires.

The men from Wellington were full value for their win as they outscored their hosts five tries to none with Ben Lam, Ngani Laumape, Matt Proctor, Vince Aso and Blade Thompson all dotting down. 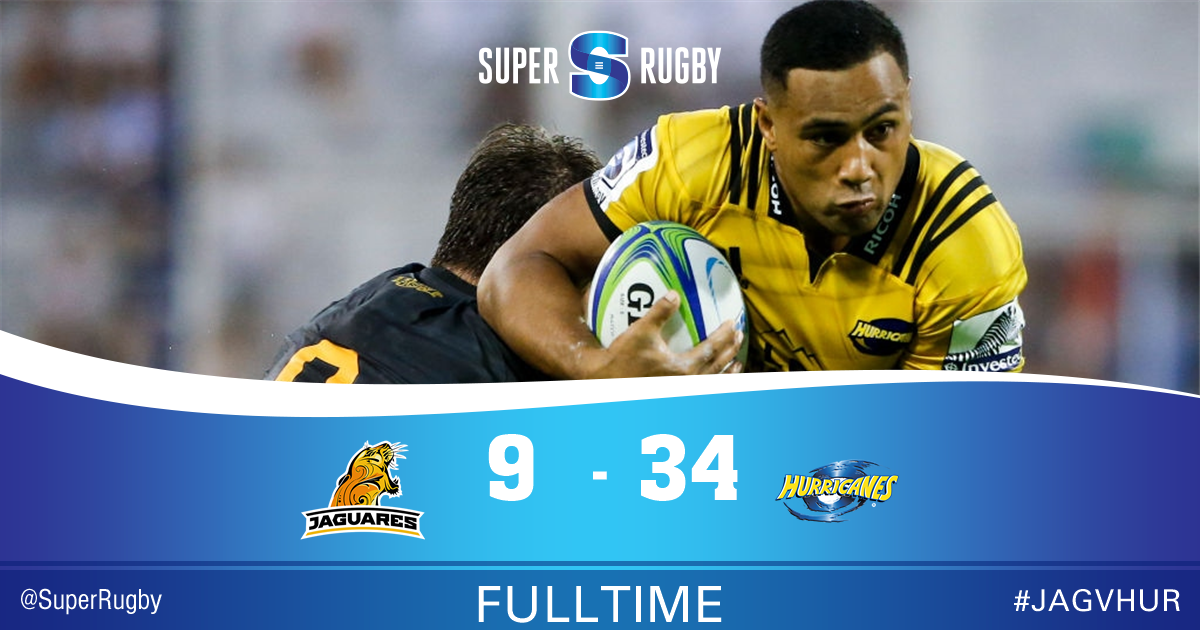 The Hurricanes showed their intent from the outset and ran the ball from all areas of the field. This approach paid dividends in the ninth minute when Gareth Evans made a superb break before offloading to Lam who sauntered in for the opening try.

Beauden Barrett added the conversion before Nicolas Sanchez reduced the deficit in the 17th minute when he added a penalty after the Hurricanes infringed at the breakdown.

The Hurricanes continued to attack and in the 26th minute, they were rewarded with their second try when Laumape combined strength and speed to beat three defenders before powering his way over the try-line.

Just before half-time, the Hurricanes' midfield strayed offside on defence inside their 22 and Sanchez slotted his second penalty which meant the visitors led 12-6 at the interval.

The second half started brightly for the Jaguares and in the 47th minute Sanchez narrowed the gap to three points when he added his third penalty after Ardie Savea infringed on defence.

The Hurricanes stepped up a couple of gears on attack and in the 53rd minute Proctor crossed for their third try after Julian Savea did brilliantly with a bullocking run in the build-up.

Barrett's conversion gave the visitors a 10-point lead but they were dealt a blow shortly afterwards when Ben May was sent to the sin bin for taking Pablo Matera out off the ball.

Despite their numerical disadvantage, the Hurricanes' confidence on attack did not diminish and in the 64th minute Beauden Barrett stabbed a perfectly-weighted grubber kick through which Aso gathered before crossing the whitewash.

The rest of the half saw the Jaguares giving their all on attack but they were kept at bay by a resilient defensive effort from the Hurricanes.

In the 78th minute, Jackson Garden-Bachop slotted a penalty before Thompson sealed the win with a late try just before the full-time whistle after trading passes with Michael Fatialofa down the right-hand touchline.