The Hurricanes held out a spirited Highlanders side as they earned a 31-28 win for their fifth victory of the Super Rugby season on Friday.

Although both sides have failed to truly find their best this season, which was evident in an error-strewn first half, they served up a veritable feast after the interval.

In a closely-fought game, Shannon Frizell and Ash Dixon went over for Aaron Mauger’s men while TJ Perenara and Ardie Savea hit back for the ‘Canes, before Beauden Barrett’s penalty took the away team in front at the start of the second period.

That score provided the catalyst for an incredible final half-hour. Kayne Hammington and James Lentjes looked to have won the match heading into the last 20 minutes, but the in-form Savea and Laumape regained the visitors’ advantage, which proved to be enough.

The Wellington outfit have struggled to find their free-flowing excellence this season, often faltering in attack, but there was no issue with their ability to find or create space in Dunedin. However, their conversion rate was initially abysmal as three opportunities were spurned in the early stages of the contest.

TJ Perenara, Barrett and Ricky Riccitelli all made significant incursions but poor passes prevented them from getting their reward as the hosts held on. They were also awarded a couple of penalties in front of the posts but, instead of taking the points, the ‘Canes went for the try and once again failed to get over the line.

That profligacy was to prove costly when Frizell crossed the whitewash, but that only came after the home side repeated the visitors’ unwanted trick when Liam Coltman’s try-scoring pass to Tom Franklin was deemed forward. Unlike John Plumtree’s charges, they did not have to wait to score as the following the passage of play saw the gargantuan back-rower superbly reach out and finish.

It was rather symptomatic of the first half as a mistake-ridden contest was interspersed with some excellent skill levels. The latter was in evidence, though, when the Hurricanes showed good patience in the opposition 22 before Perenara sniped across the whitewash.

Parity was restored, but not for long with the Highlanders setting up a maul and scoring through Dixon, who was awarded the try despite replays indicating that there was a knock-on in the act of touching down.

The Hurricanes may have gone behind but they were always dangerous and Savea benefited from a loose ‘Landers pass to intercept and scamper 60 metres to score.

Barrett’s conversion levelled matters at the break before the two-time World Player of the Year took them in front in the second period, kicking a fine effort off the tee after 44 minutes.

That only served to inspire Mauger’s men, however, who increased the intensity and started to dominate the scrum battle. Ayden Johnstone and Tyrel Lomax ripped into the opposition front-row and it opened the space for Hammington to pick up and cross the whitewash.

Lentjes followed him over as the hosts seemed to take control, but Ben Lam and Savea kept the Hurricanes in the contest when the wing displayed his power, speed and awareness to send the openside scampering towards the line.

The All Black duly finished brilliantly to reduce the arrears before two more internationals combined for the Wellington franchise’s next – and ultimately decisive – effort. Barrett took the ball to the line, off-loading to send Laumape clear, and the outstanding centre did the rest, stepping outside and scoring for a three-point buffer.

All the ‘Canes had to do was run down the clock and, although they conceded a five-metre penalty and saw Liam Mitchell sin-binned, they just about held on, condemning the Highlanders to a fourth successive defeat. 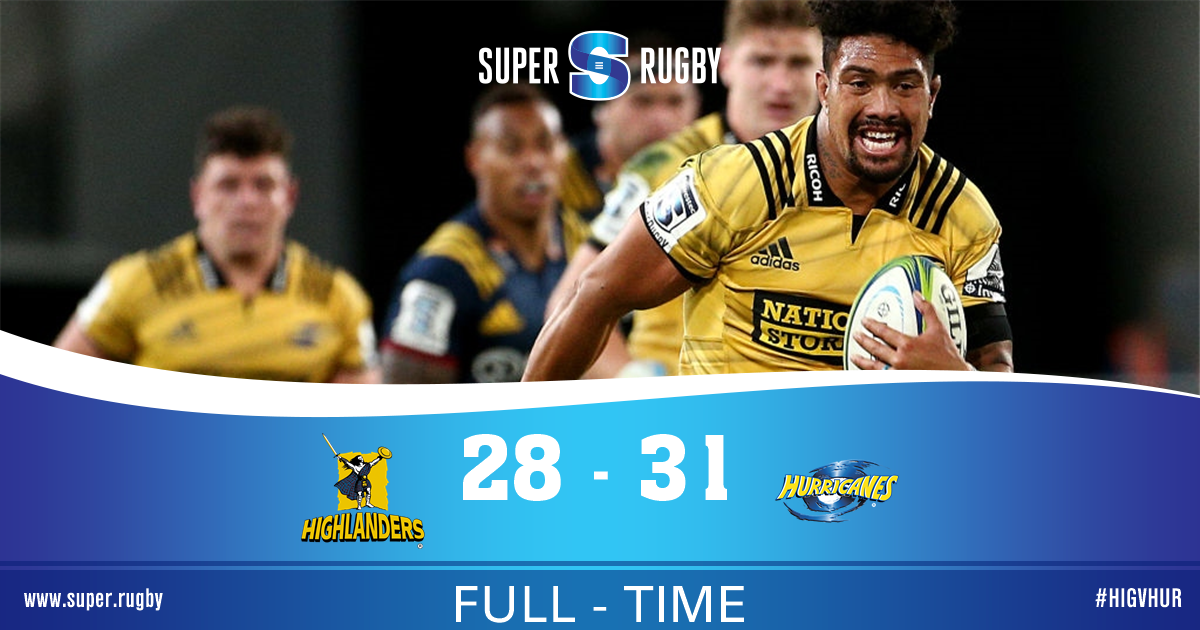