Hurricanes get the better of plucky Sunwolves

The Hurricanes secured their seventh successive win of the season when they claimed a 43-15 triumph over the Sunwolves in Wellington on Friday.

The 2016 champions were full value for their win as they outscored the Sunwolves seven tries to one but they were made to work hard for their win and only sealed the result in the game's latter stages.

The win means the Hurricanes provisionally move top of the New Zealand Conference and the overall standings but that situation could change if the Crusaders and Lions win their respective matches on Saturday.

The Hurricanes made the brighter start and thought they had opened the scoring in the third minute when Vince Aso crossed the whitewash but his effort was disallowed due to a forward pass from Julian Savea in the build-up.

The Sunwolves made full use of that lifeline and were soon camped inside the home side's half. And they were rewarded in the ninth minute when Lappies Labuschagne stepped out of a tackle from Ardie Savea before scoring the opening try.

Hayden Parker added the extras but despite that early setback, the Hurricanes did not panic and opened their account via a Julian Savea try in the 14th minute. This, after he gathered a pass from Matt Proctor inside the Sunwolves' 22 and the burly All Blacks wing had an easy run-in over the tr-line.

Beauden Barrett succeeded with the conversion attempt which meant the sides were level at 7-7 but the visitors regained the lead shortly afterwards when Parker slotted a penalty after the Hurricanes strayed offside on defence.

The Hurricanes stepped up a couple of gears on attack during the latter stages of the half and were rewarded with two further tries during that period. First, Finlay Christie gathered an inside pass from Beauden Barrett, inside the Hurricanes' 22, before dotting down.

And on the stroke of half-time, Reed Prinsep made a break off the back of a five-metre scrum before crashing over for a deserved try which meant the Hurricanes led 21-10 at the interval. 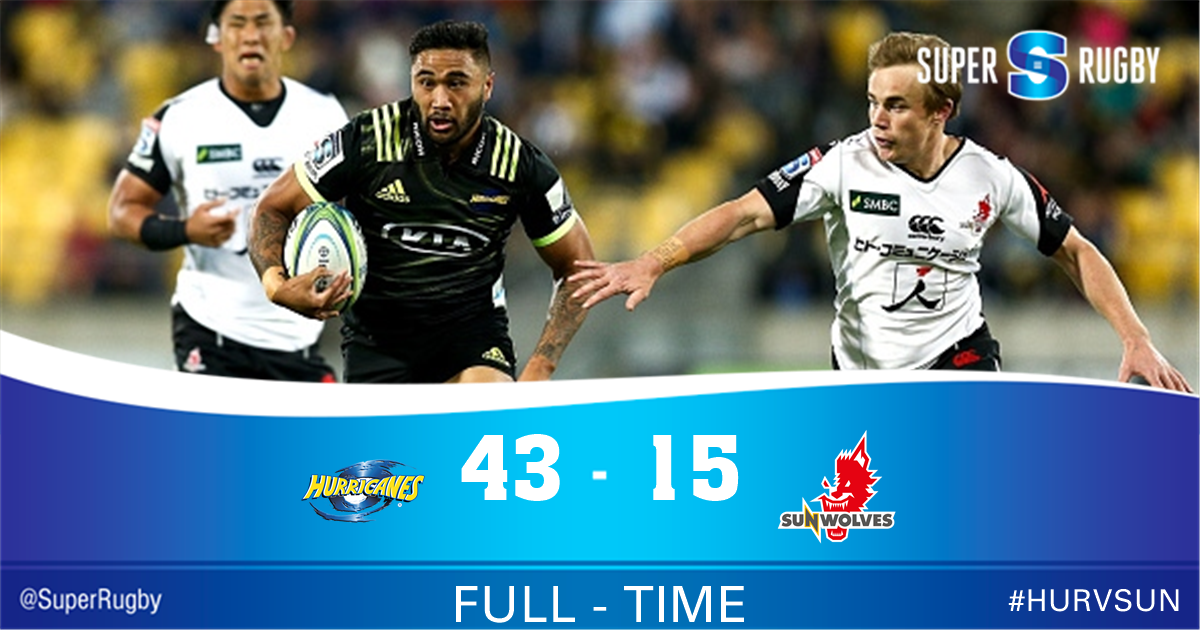