Hurricanes have too much firepower for Sharks

The Hurricanes claimed a 30-17 victory over the Sharks at Kings Park in Durban on Saturday.

The Hurricanes started on the front foot and won a scrum just inside the Sharks' 22 in the fifth minute. The visitors went to the openside, with Beauden Barrett getting in between two defenders and offloading for brother Jordie, who had a clear run-in under the posts. Beauden added the extras.

Soon after, Sharks fly-half Curwin Bosch cut the deficit to four with a penalty goal after the visitors were penalised for offside. Beauden Barrett restored the seven-point buffer in the 12th minute when Ruan Botha was guilty of not releasing after good work at the breakdown from Hurricanes captain TJ Perenara.

Botha then conceded a second penalty in quick succession - this time for not rolling away - as Beauden Barrett duly punished him from the tee to make it 13-3 after 16 minutes.

Lukhanyo Am's high tackle on Ngani Laumape then gifted John Plumtree's side another penalty - but this time Beauden Barrett missed the target. Matt Proctor was then blown up for a high tackle on Sbu Nkosi. But the hosts failed to capitalise on a promising position with a Mzamo Majola knock-on bringing the attack to an end.

In the 32nd minute, the Canes won a scrum penalty and kicked for the corner. Ngani Laumape powered over from close range from the resulting lineout move as Beauden Barrett made no mistake with the conversion for a 20-3 lead.

Just before the interval, the Sharks finally found their rhythm. Hurricanes prop Asafo Aumua's knock-on deep inside his own half gave the Sharks a scrum in a promising position on the left-hand side. Jean-Luc du Preez made a brilliant break before the ball was swung out to the right where Aphelele Fassi had space on the overlap and dotted down in the corner. Bosch converted as the Sharks went in to the break trailing by ten at 10-20.

Robert du Preez's side made the perfect start to the second half. Brilliant running by Makazole Mapimpi and Fassi ensured Louis Schreuder was brought down inches short. But the Sharks successfully recycled to Juan Schoeman, who manoeuvred his way over the line as Bosch reduced the arrears to three with the conversion.

The 'Canes extended their lead to 23-17 from the boot of Beauden Barrett after Am was penalised for not releasing, due to some heroic work from All Blacks flanker Ardie Savea at the breakdown.

Western Cape-born Wes Goosen then got himself on the try column for the visitors in the 66th minute. The Sharks were forced in to conceding a lineout deep inside their own territory. The ball was swung from left to right, with Goosen breaking the tackle of Schreuder to finish in the corner.

Hurricanes flanker Vaea Fifita was red-carded for a high hit on Jean-Luc du Preez with five minutes to go but it made no difference to the final result. 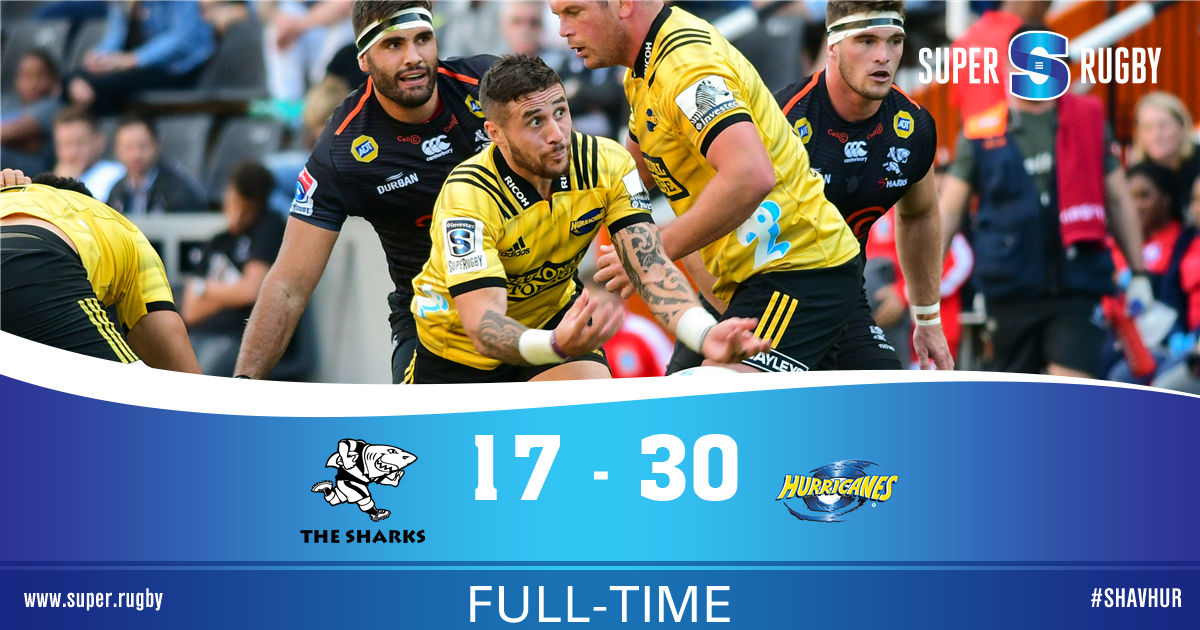