The Hurricanes consolidated their position among the tournament's frontrunners when they claimed an impressive 50-19 win over the Rebels in Melbourne on Friday.

Despite the scoreline, the Hurricanes were made to work hard for this win as the Rebels held the upperhand early on but the men from Wellington got stronger as the match progressed and eventually outscored their hosts seven tries to one with Ben Lam leading the way with four five-pointers.

The result was a significant one as it means New Zealand teams have now won 33 consecutive matches against their counterparts from Australia with the last Australian victory registered in Round 14 of 2016 when the Waratahs beat the Chiefs.

The opening exchanges were fairly even and Beauden Barrett and Jack Debreczeni traded early penalties which meant the sides were deadlocked at 3-3 by the fifth minute.

The visitors were first to cross the whitewash though when Lam gathered a pass from Jordie Barrett deep inside the Rebels' 22 before diving over in the left-hand corner.

Despite taking the lead with that try, the Hurricanes conceded too many unforced errors, especially on defence, and three further penalties from Debreczeni meant the Rebels were leading 12-8 before Mat Philip crossed for their only try, from close quarters, on the half-hour mark.

The Hurricanes replied with another penalty from Beauden Barrett in the 33rd minute and shortly afterwards they crossed for their second try which was scored in bizarre fashion. This, when a clearance kick from Beauden Barrett bounced infield, close to the halfway line. Debreczeni failed to deal with the ball which allowed Lam to pounce and he did well to shrug off challenges from Debreczeni and Marika Koroibete before racing away to score his second try.

That try seemed to give new energy to the visitors and on the stroke of half-time they found themselves on the attack inside the Rebels' 22. The ball came out to Beauden Barrett, who sold the Rebels' on-rushing defence a cheeky dummy before dotting down under the posts.

He dusted himself off to add the conversion and the Hurricanes had their tails up with the score 25-19 in their favour at the interval.

The visitors continued to dominate after the restart and five minutes into the half, Barrett added another penalty before Gareth Evans crossed for his first ever Super Rugby try in the 49th minute, after superb work from TJ Perenara in the build up.

The Hurricanes were far from done though and on the hour-mark Jordie Barrett and Brad Shield combined brilliantly to put Ngani Laumape in the clear and he did well to burst through tackles from Jack Maddocks and Will Genia poweing his way over the try-line.

Things went from bad to worse for the Rebels shorlty afterwards when Billy Meakes was yellow carded for a cynical defensive foul close to his try-line and with extra numbers the Hurricanes were rewarded in the 70th minute when Lam crossed for his third try.

The flyer wasn't done though and just before full-time, he crossed for his fourth try after Jordie Barrett and Ihaia West did well in the build-up. 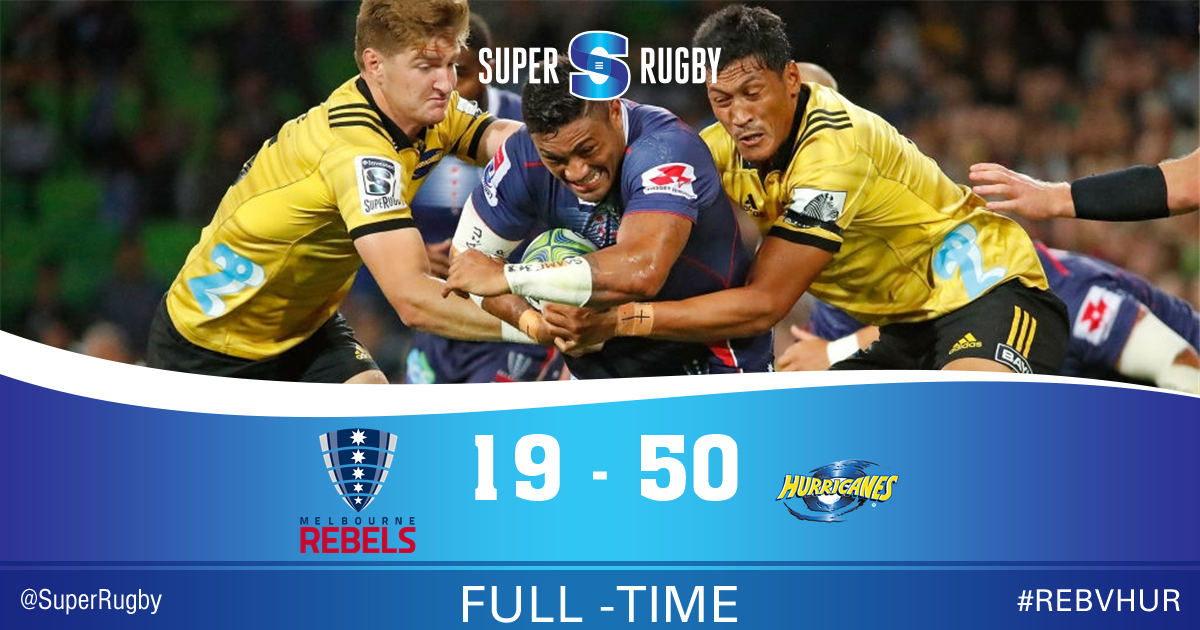