The Hurricanes came from behind to grind out a 29-23 victory over a spirited Sunwolves outfit in Tokyo.

The hosts opened the scoring after a scintillating run from inside centre Rahboni Warren-Vosayaco. A slick line-out move saw fly-half Hayden Parker put Warren-Vosayaco in a hole, who went on to beat a couple defenders before throwing a pinpoint pass out wide to winger Semisi Masirewa who went over untouched.

The Hurricanes hit back after piece of individual brilliance from TJ Perenara. After the initial break from Fletcher Smith took play to 20m out, the All Black scrum-half threw a dummy and ran over behind the poles.

The Sunwolves continued to make the Hurricanes pay for their mistakes via the boot of Parker, who knocked over three penalties before playing a crucial role in their second try.

Recognising the acres of space on the outside, the New Zealand born number 10 executed a superb cross kick to a flying Masirewa who crossed the line in splendid isolation. The conversion saw the hosts’ lead balloon out to 23-7 with ten to play in the opening half.

Smith would add some respectability to the scorelione with a well-struck penalty from 42m out on the stroke of half-time.

The Wellington franchise got back in the game when the in-form Ngani Laumape stabbed through a kick for winger Ben Lam, who showed his searing pace to collect the ball and dot down for the try.

Ten minutes later, a charge down from replacement lock Isaia Walker-Leawere would lead to another Hurricanes try. Under pressure in their own 22, Parker went to his right boot and Walker-Leawere got his big frame across to charge down the ball, leaving full-back Chase Tiatia to score one of the easiest tries of his career. The conversion from out wide missed, but the visitors had brought it back to 23-22.

The Hurricanes continued their comeback via winger Wes Goosen. A poor line-out from the Sunwolves saw Laumape scoop up the ball and break up field. Slick hands gave Goosen the ball on the touchline and he chipped forward before eventually gathering for the try. Smith added the extra two for a six point lead with 11 minutes to play.

The Sunwolves rallied in the final minutes to pile the pressure on the visitors who defended frantically to grind out a victory. 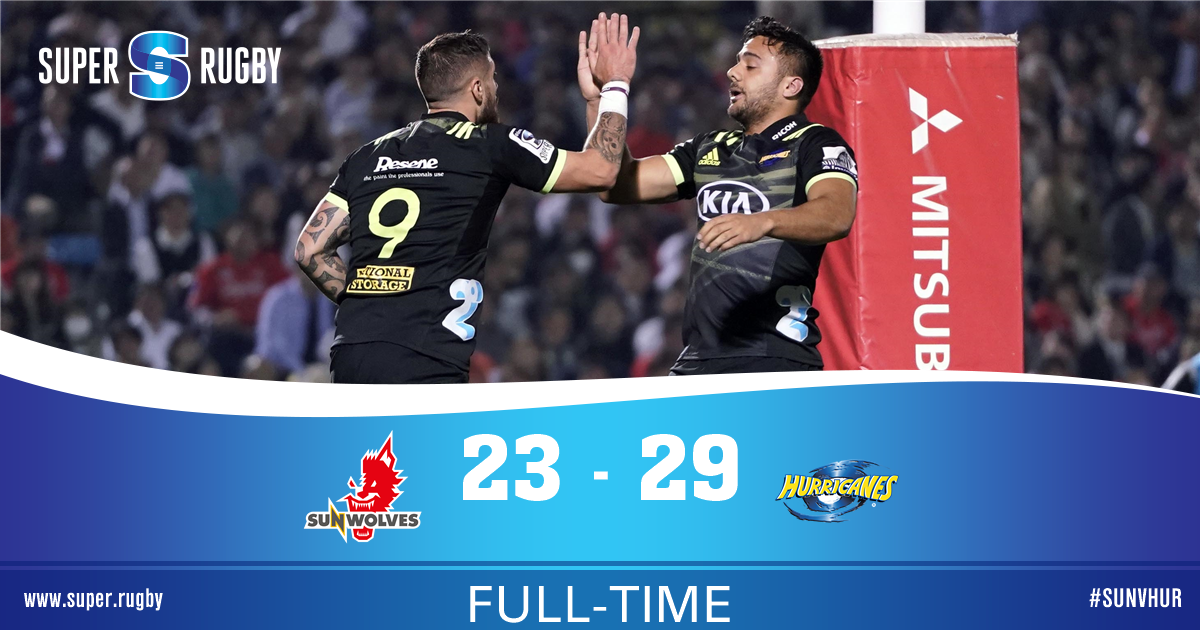