Hurricanes put Sunwolves to the sword

The Sunwolves proved no match for the Hurricanes in Napier on Saturday, going down 62-15 in a decidedly one-sided contest.

The Canes ran in 10 tries in a dominant display of running rugby, despite finding themselves down on the scoreboard early on.

The first try of the match went to the Sunwolves, as Michael Stolberg dotted down after a well-worked move from a lineout, collecting an inside pass from Jarred Adams.

But from that point on it was virtually all the Hurricanes, who would run in four unanswered tries before the half-time whistle sounded, and six more after the break.

The Sunwolves went back in front courtesy of a penalty from Jumpei Ogura, but the Canes were over for their second try a few moments later courtesy of fullback Chase Tiatia after setting up an attacking lineout close the Sunwolves line and sending it out wide where they had an overlap.

Tiatia went over for his second try shortly after following a quick tap from a penalty, as some quick handling helped the speedster over the line.

Moments later, it was Van Wyk's turn to pick up his second try from another attacking lineout. This time around the Canes set up the rolling maul, with TJ Perenara reading the situation to perfection to send the former Sharks winger over.

The Canes thought they had their fifth try shortly before the break, but the TMO ruled out the score for a forward pass in the build-up.

Leading by 28-10 at half-time, the Canes added to their tally straight after the break, as Ben Lam ran into a gap and stormed over in the corner from the kickoff.

They scored their sixth immediately following the restart, Perenara crossing over this time after some more quick handling and swift offloads, as the Sunwolves night went from bad to worse.

The carnage didn't stop there as the Canes crossed for their seventh try within minutes, No 8 Gareth Evans getting in on the act this time as he ran in under the sticks.

A full nine minutes passed before the home side scored again, Van Wyk picking up his hat-trick and bringing up the Canes' half-century after the Canes created an overlap from a stolen lineout in Sunwolves territory.

Try number nine arrived just after the hour-mark, Laumape dotting down after some great interplay with Tiatia.

To the Sunwolves' credit, they continued to fight and picked up their second try courtesy of Siosaia Fifita, who burst through the defence in the 66th minute following an attacking scrum in the Canes 22.

But there was time for one final score from the home side as Aso got the lucky bounce following a kick through and dotted down to seal an emphatic 62-15 victory. 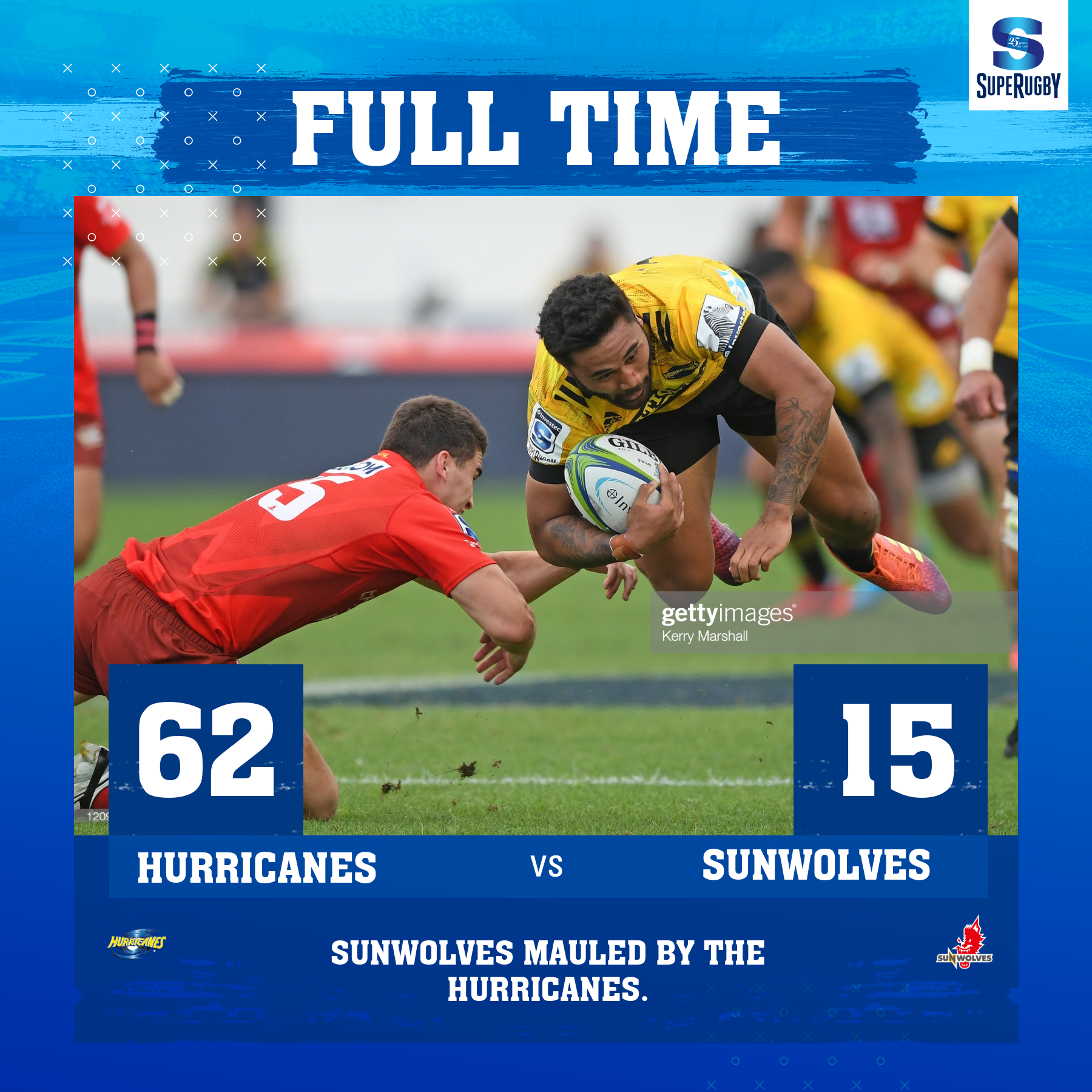