Hurricanes scrape through as Foley crumbles under pressure.

The Hurricanes without their star player Beauden Barrett outscored the Waratahs two tries to one.

The Australian side led most of the match and took a 12-10 lead at the break. However, lack of composure and a 78th minute missed penalty kick by Bernard Foley proved costly for the home team.

The Waratahs took a 9-3 lead after 15 minutes of the play. Both sides failed to build some rhythm and exchanged early penalty kicks.  Waratahs flyhalf Bernard Foley got his team infront with three successful kicks, while Jordie Barrett managed to bag three points for his team.

With nine minutes left of the first half, Hurricanes had a five-metere line-out, the side piled the pressure on the Watatahs’ defence before feeding the backline. After multiple phases the side was still could not find a way through.

Eventually the Hurricanes won a penalty and opted for the scrum which proved to be a good decision, as their build a few phases before Ardie Savea burst over the line from close range.

Barrett added the easy extras for a 10-9 lead.

Just before the break, Waratahs were rewarded with a penalty, and what became the Australian side’s theme of the match they again opted to go for posts. Foley made no mistake to add the three points for the 12-10 as they head to the dressing rooms.

Waratahs picked up were their left off and eventually had their first try in the 47th minute. Ned Hanigan sealed the ball inside on the 50 metre mark followed by quick hands – including a perfect pick-up by Israel Folau – which set up Curtis Rona for the five-pointe out wide. Despite a very difficult angle, Foley added the two points with the conversion, 19-10.

The visitors got their first points of the second half via a successful penalty kick by Barrett. The fullback reduced the deficit to six points.

Hurricanes created the opportunities and found their way behind the Waratahs’ tryline, however referee Angus Gardner along with the TMO ruled NO Try on both occasions. First Du’Plessis Kirifi was penalized for a forearm to the throat to Waratahs Michael Hooper and on the second occasion Ben Lam was hand was on the touchline.

With five minutes left of the clock and after relentless onslaughts, Hurricanes finally took the lead when Du’Plessis Kirifi burst through a narrow gap for the five-pointer. Barrett added the extras for the 20-19 lead.

To make things worse for the hosts, Wallaby star and Waratahs iceman Foley, whose boot was flawless for 78 minutes, missed his first kick of the match. 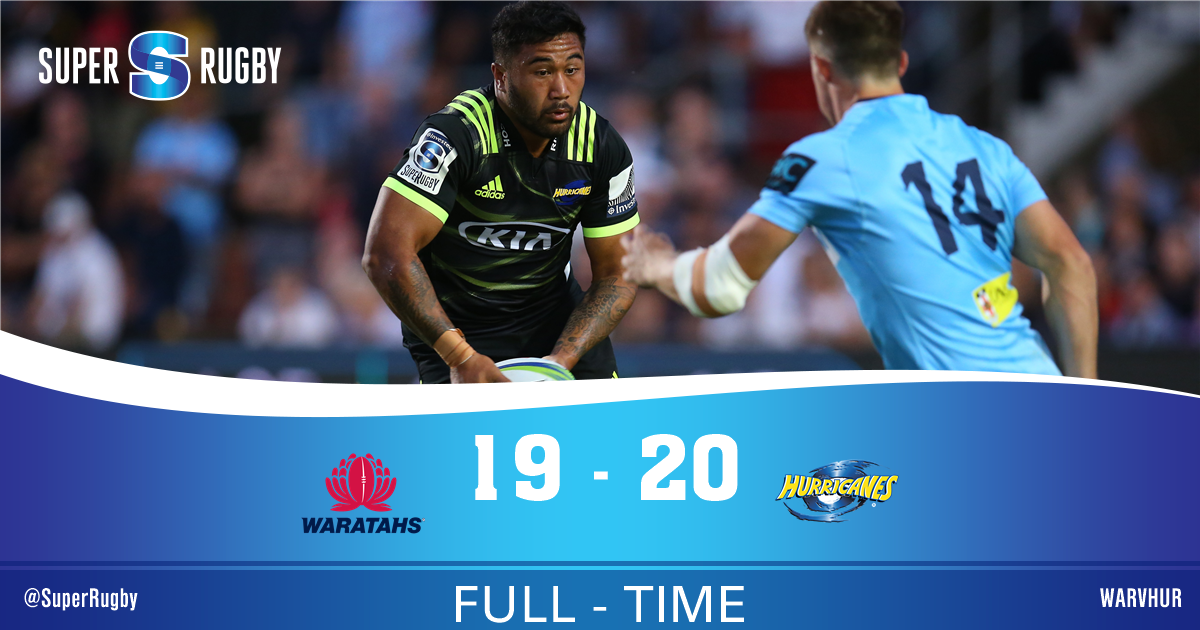