The Hurricanes made it three wins from three in Super Rugby Aotearoa following a nailbiting 29-27 triumph over the Blues in Wellington.

It was another incredible game in the new competition as the North Island rivals went toe-to-toe. Ngani Laumape was in particularly fine form and his outstanding try gave the Canes an early 7-3 advantage before the visitors responded via Beauden Barrett and Kurt Eklund.

However, the hosts snatched the momentum when 15 unanswered points – aided by scores from Reed Prinsep and Dane Coles – saw them go 22-15 in front, before their opponents wrestled it back.

Akira Ioane and Eklund both touched down to give Leon MacDonald’s men the lead going into the final 10 minutes, but there would be one final twist as Asafo Aumua crossed the whitewash and Jordie Barrett added the extras to claim a superb Canes victory.

After successive defeats to the Aucklanders, the hosts came out determined to right the wrongs of the previous two encounters. It didn’t necessarily start well, with Otere Black opening the scoring for the visitors, but they soon got themselves on the scoreboard with a stunning try.

It was all thanks to star centre Ngani Laumape, who received the ball on the left-hand side, stepped Barrett and remarkably beat the full-back for pace. He still had plenty to do but the 27-year-old duly barrelled over Black and touched down to complete a superb individual effort.

No doubt rather embarrassed by that defensive error, Beauden Barrett responded superbly. Every time the former Canes player had touched the ball he was met by a chorus of boos on his return to Wellington, but the crowd went silent as Barrett dummied and sped through a hole to cross the whitewash.

The build-up to the game was all about the duel between the brothers at fullback, but Laumape also joined the party and almost scored again when he ran over Beauden before being stopped just short. In trying to slow the ball down, Emoni Narawa was caught on the wrong side of the ruck and was justifiably yellow carded.

With their opponents down to 14 men, the hosts continued to press as Peter Umaga-Jensen burst through, but they could not provide the finishing touches to their good work. Instead, the Blues increased their buffer upon Narawa’s return as a driving maul resulted in Eklund going over.

Despite Black being awry off the tee, the Aucklanders had garnered an eight-point lead, but back came the Hurricanes when they surged towards the line from a lineout and Prinsep touched down. Jordie Barrett missed the conversion but was on target on the stroke of half-time as the teams went into the interval level.

The second period began in the same thrilling fashion as the hosts went through the phases and Coles took a neat line to finish under the posts.

The Canes’ defence also appeared to have improved with their rush defence consistently forcing their opponents into reverse, but the Blues hit back when Ioane barged his way across the whitewash to keep the game finely poised going into the final quarter.

Momentum was now with MacDonald’s charges and another excellent drive once again resulted in Eklund moving the Blues back into the lead.

It set up a thrilling finish, with the home side five points behind, and a wonderful contest deservedly got an outstanding conclusion. After pressurising the Aucklanders’ line, Jason Holland’s men were rewarded as Aumua went over from close range out wide. It left a difficult conversion for Jordie Barrett, but the younger brother made no mistake as he and his team-mates took the spoils. 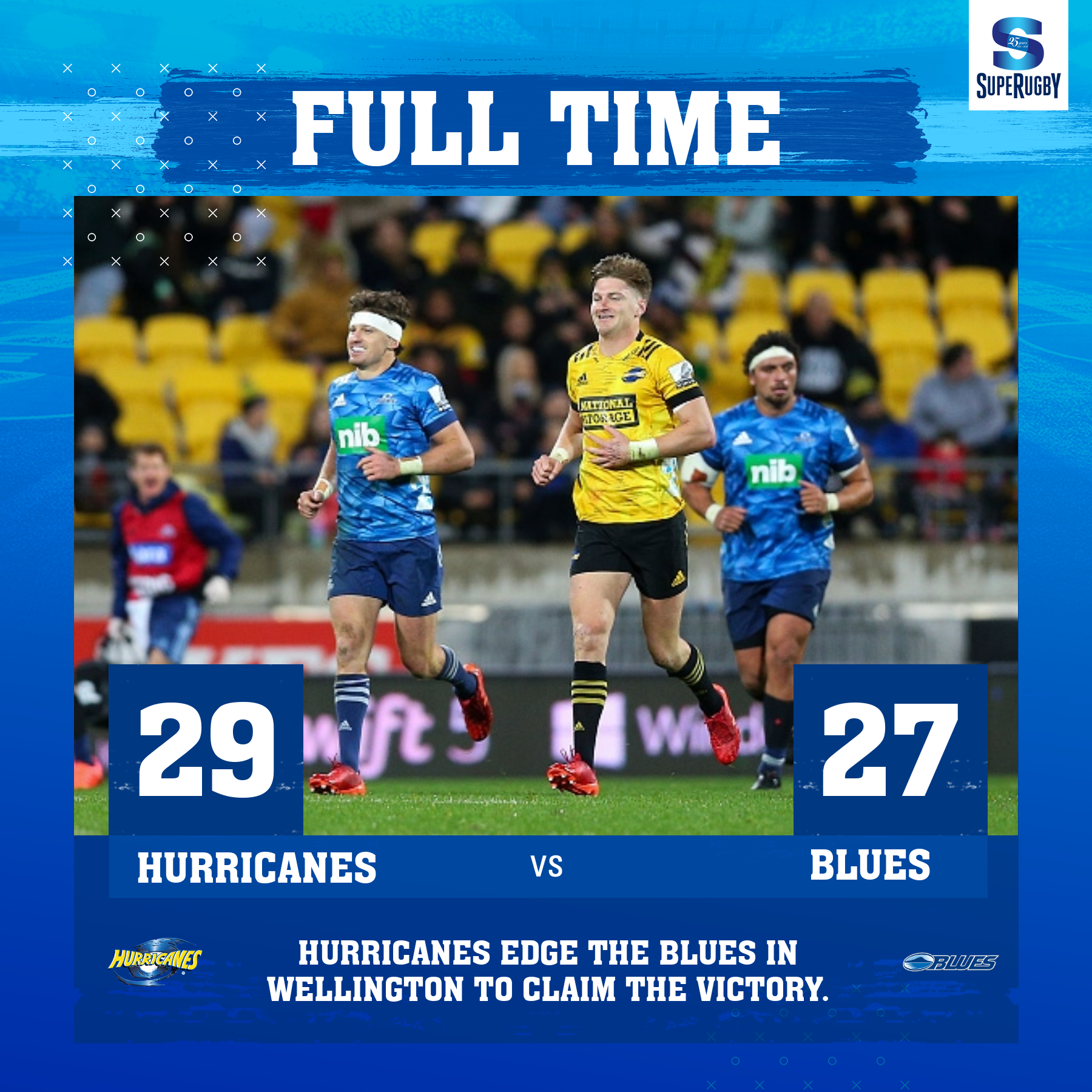