The Hurricanes continued with their fine recent form when they claimed a deserved 41-6 victory over the Force in Palmerston North on Friday.

Although the scorelines suggests otherwise, the Hurricanes didn't always have things going their way especially in the first half and they held a slender 10-3 lead at the interval.

The home side turned on the style after half-time, however, and eventually outscored the Force six tries to zero.

Hurricanes skipper Dane Coles made a try-scoring return, after missing their previous matches through injury, and his five-pointer proved the difference between the sides at half-time.

Coles got his name on the scoresheet in the 26th minute after the hosts pulled off a well-worked  line-out move deep inside the Force's 22.

Grant narrowed the gap with a penalty in the 44th minute and the game was evenly poised until James Marshall crossed for the 'Canes second 15 minutes later, after the ball went through several phases in the build-up.

Barrett missed from the kicking tee but the Hurricanes continued to dominate and soon had another try. This time TJ Perenara rounded off after Willis  Halaholo had set up the score with a superb line break which tore the first line of the Force's defence to shreds.

Although they had secured their bonus point by then, the Hurricanes didn't rst on their laurels and continued to attack from all areas of the field. Three minutes after Perenara's try the hom side won turnover ball and Ngani Laumape beat a couple of defenders before putting Cory Jane away, and he offloaded to Blade Thompson who dotted down under the posts.

The Force battled to keep up but the Hurricanes weren't done yet, and in the 73rd minute Laumape burst through a couple of tackles before crashing over in the left-hand corner.

And shortly before full-time Ardie Savea rounded off a superb allround performance from the hosts when he crashed over from a line-out drive close to the Force's try-line. 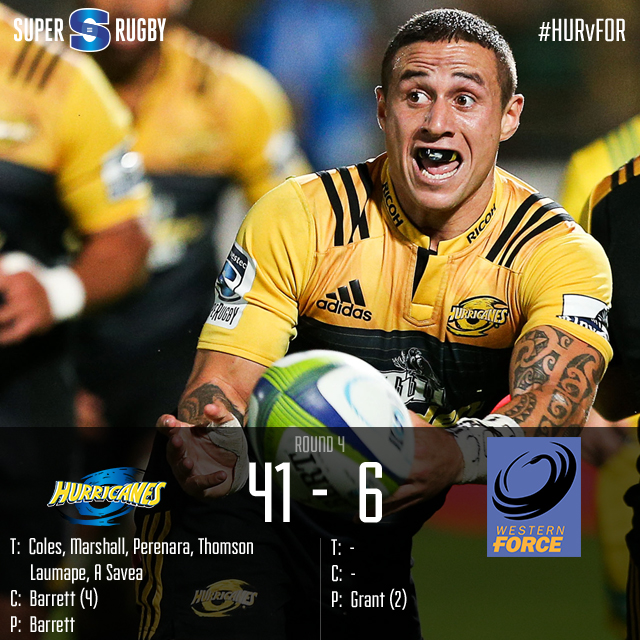