Tries rained down at the Sydney Cricket Ground on Friday as the Hurricanes thumped the Waratahs 64-48 in a Super Rugby Trans-Tasman encounter.

In the fourth minute, Savea scored in the corner with no one able to stop the 'Bus' with that much space but Barrett missed the conversion.

The 'Tahs had an instant response. Gordon broke around the ruck, threw a dummy before popping to Newsome, who darted through the gap, swerved the cover defenders and dotted down under the sticks for a stunning individual score. Ben Donaldson's conversion put the hosts ahead.

The visitors regained their lead shortly afterwards. The Australian outfit didn't want to kick the ball out of play, allowing the 'Canes to counter-attack. Salesi Rayasi slipped a weak tackle before offloading to Proctor, who raced away from Izaia Persen and Bell to score.

The fourth try of the match remarkably came with just 16 minutes gone when Bell finished off a sublime lineout move by the 'Tahs. Perese got over the advantage line. The forwards swept around the ruck which saw Hugh Sinclair take a gap before offloading to his big prop forward to score under the posts.

In the 24th minute, the 'Canes scored their second try and the game's fifth when Barrett finished off a sublime move by the Kiwis, with the Waratahs having no answer to the quick passing and strong carries by the forwards in the buildup.

The away side extended their lead just after the hour mark when Coles spun past Gordon off the back of a driving maul.

There were still two more tries scored in a crazy first half. First, Proctor had another five-pointer after slipping a weak one-on-one tackle and coasted to the try line untouched. Then Gordon sold a dummy, stepped inside two defenders and shrugged off his opposite number to cross next to the posts as the 'Canes went into the interval 33-24 up.

Seven minutes after the break, the Kiwi outfit extended their lead. Coles combined with Barrett, who chipped a crossfield kick to Savea for his brace. Soon after, the 'Tahs responded. They were on the attack inside the 22 after Donaldson's run. They took a quick penalty and a few pick-and-drives, Johnson-Holmes crashed over. 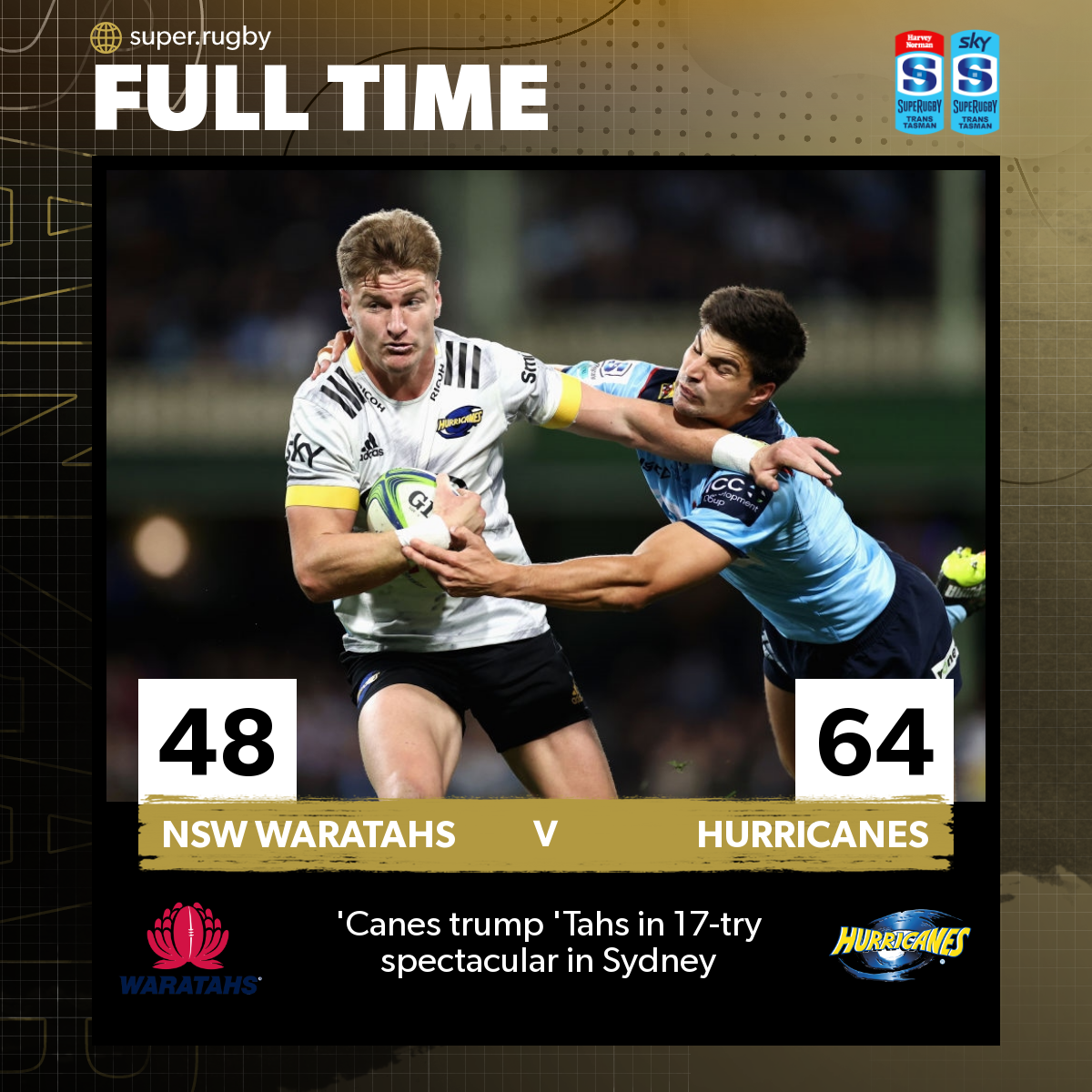 Iose then ghosted through a big hole to score under the posts but Johnson-Holmes crashed over soon afterwards for his brace to revive the Australian team's hopes.

Shortly after the hour mark, Barrett made a break, drew the defender before playing the supporting Du'Plessis Kirifi, who put Umaga-Jensen away.

Swinton then dived in to score for the hosts and then Reed Prinsep and Asafo Aumua got on the try column for the 'Canes.

And Maddocks finished off a sensational try after the hooter. It started with a chip-chase inside his 22. The interplay between the backs was stunning before the fullback raced away to score in the corner.