The Hurricanes earned a record 43-14 victory over the Reds in their Trans-Tasman Super Rugby clash in Wellington on Friday.

Despite the scoreline, the Reds were well in the contest for most of the match, with a couple of decisions not going their way and in typical Hurricanes style, the visitors were made to pay.

The home side enjoyed a bright start with their first visit to the Reds' 22m. A slick lineout was collected and two runners came flying at the line - Ardie Savea and Ngani Laumape - and flyhalf Ruben Love's flat pass chose the latter who burst through a poor tackle attempt and scored the opening try.

The Reds continued to show promise on attack, but lacked ball protection at the ruck. A turnover led to a fantastic run by Love who would find Laumpae on the wing, but the centre would butcher the grounding.

Reds scrumhalf Tate McDermott - who was brilliant all night - was proving difficult to contain and two sniping runs brought them within metres of the line. But twice the Hurricanes were able to thwart the Reds' efforts. In television replays, TMO Aaron Paterson found Tyrel Lomax guilty of a high shot on Feao Fotuaika and was given his marching orders.

Now with an attacking scrum, it was third time lucky for McDermott as he glided around the outside of his defender to score under the uprights. Bryce Hegarty added the extras to make the score 7-7 after 28 minutes.

Despite being a man down, the Hurricanes managed to play rugby in the right area of the park, even earning a penalty after a no-arms tackle. Jordie Barrett popped it over for the lead, which they maintained until halftime.

The Reds were reduced to 14 men shortly after the break, with winger Filipo Daugunu getting a harsh yellow card for a cynical offside play. The Hurricanes made them pay immediately, with Laumape and Love reversing roles as the latter put Love in heaps of space and he showed good pace to go over in the corner.

However, the Reds showed great heart to strike back. After winning the ball off the kickoff, they exercised patience, keeping the ball amongst the forwards for 15 phases before hooker Brandon Paenga-Amosa crashed over from close range.

A poor kick from Hegarty put the Hurricanes on the attack from the lineout. After six phases, Barrett would run straight through the first line of defence, evading five tackles in total, on his way to the 5m line. Quick hands out wide saw replacement hooker Dane Coles slide over in the corner untouched.

In another stroke of bad luck that effectivel ended the Reds chances, the Hurricanes were awarded a penalty try. Laumape and Hegarty chased a grubber over the tryline and referee James Doleman ruled that Hegarty intentionally hit the ball over the dead-ball line and that a try would have been scored if he hadn't. To add insult to injury, the flyhalf was shown a yellow card as the Reds players chuckled in utter disbelief.

A deflated Reds outfit then conceded two late tries as the Hurricanes replacement forwards made their presence felt. 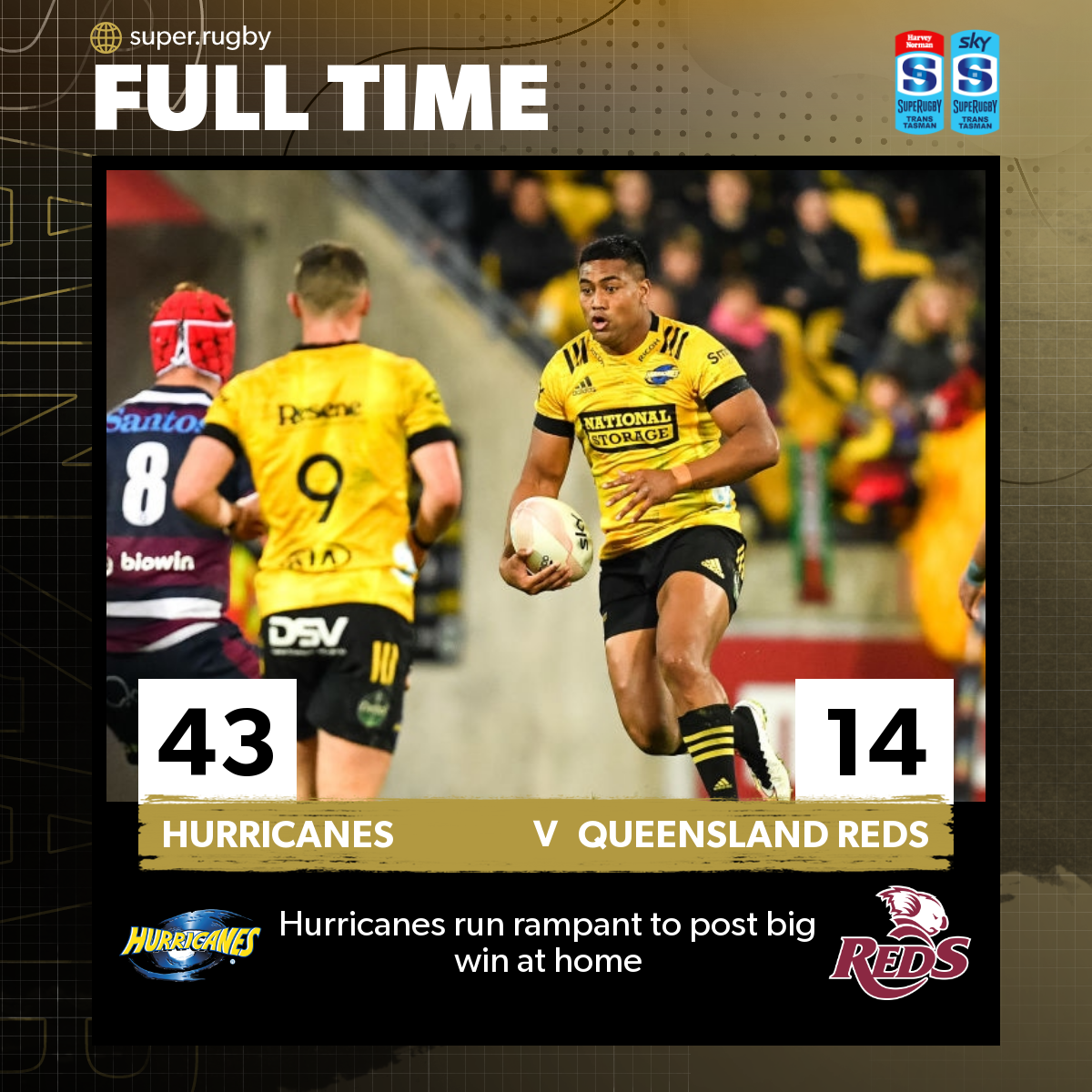