The Hurricanes recovered from a slow start to put five tries past the Rebels and secure a bonus-point 35-13 victory in Wellington.

While the match was less one-sided than the scoreline suggests, with the Rebels still very much in the game at the start of the second half, the home side did eventually manage to pull away, ultimately outscoring the visitors five tries to two - thanks in no small part to their host of dangerous backline players.

The likes of Julian Savea (twice), Billy Proctor and Wes Goosen all crossed the whitewash, along with replacement hooker Asafo Aumua, and were a constant threat whenever they had the ball in hand.

The victory moves the Hurricanes to the top of the Super Rugby Trans-Tasman table with two wins from two, while the Rebels remain rooted at the bottom after their second straight defeat.

The game started with an unbroken passage of play that lasted nearly three full minutes, as both sides showed a willingness to keep the ball in hand and run at the opposition.

But a number of early penalties for the Canes put them on the front foot and kept the Rebels pinned down inside their own 22, leading to the referee eventually losing his patience and sending prop Cabous Eloff to the bin.

Despite being under the cosh and a man down, the Rebels continued to repel everything the Canes were throwing at them, and they eventually managed to escape without giving away a single point.

But having defended superbly for the better part of 15 minutes, the Rebels would give away the opening try in disappointing fashion when Julian Savea read a stray Joe Powell pass to perfection, pulling off the intercept and racing 50 metres to score under the posts.

The Canes infringed straight from the restart to hand the Rebels a kickable penalty, and with a man down the visitors were happy to wear down the clock and take the points on offer.

But unfortunately for the Rebels, the Canes would hit back almost immediately with their second try of the evening, as Ngani Laumape produced a powerful run in the midfield to draw in several defenders before offloading to Jonathan Taumateine, who slipped the inside pass to Billy Proctor for the score.

The Rebels started the second half in impressive fashion as their forwards kept the ball in hand and produced several powerful runs and smart offloads to make their way towards the line, before a beautiful little flick-on pass to Michael Wells saw the flanker go in for the try in the corner.

But while the Rebels forwards were looking strong, the Canes backs continued to look very dangerous as well, with the likes of Laumape and Wes Goosen causing the visitors' defence plenty of problems.

After Goosen very nearly managed to touch down following a superb attacking move on the left-hand side of the field, it was a run down the right from Proctor and a well-timed offload to Savea that led to the Canes' third try.

The Rebels weren't done yet and hit back with a superb move of their own as Powell took a quick tap and made a nice little break to create the space on the outside, where a long pass to Campbell Magnay saw the No 13 stand up strongly in the tackle and carry several defenders over the line for the try.

The Canes were soon back in Rebels territory courtesy of a couple of penalties, however, allowing Orbyn Leger to judge a crossfield kick to perfection, picking out Goosen on the far side for the easiest of tries.

With 10 minutes to go, Marika Koroibete nearly hit back for the Rebels following a powerful run in the corner, but he was just hauled into touch before dotting down.

The Canes' fifth try came courtesy of a stunning counter-attack from a turnover inside their own territory, as they carried the ball all the way to the line before Asafo Aumua powered his way over from up close. Jordie Barrett kicked his fifth straight conversion to pile on the points as the Canes completed the well-deserved win. 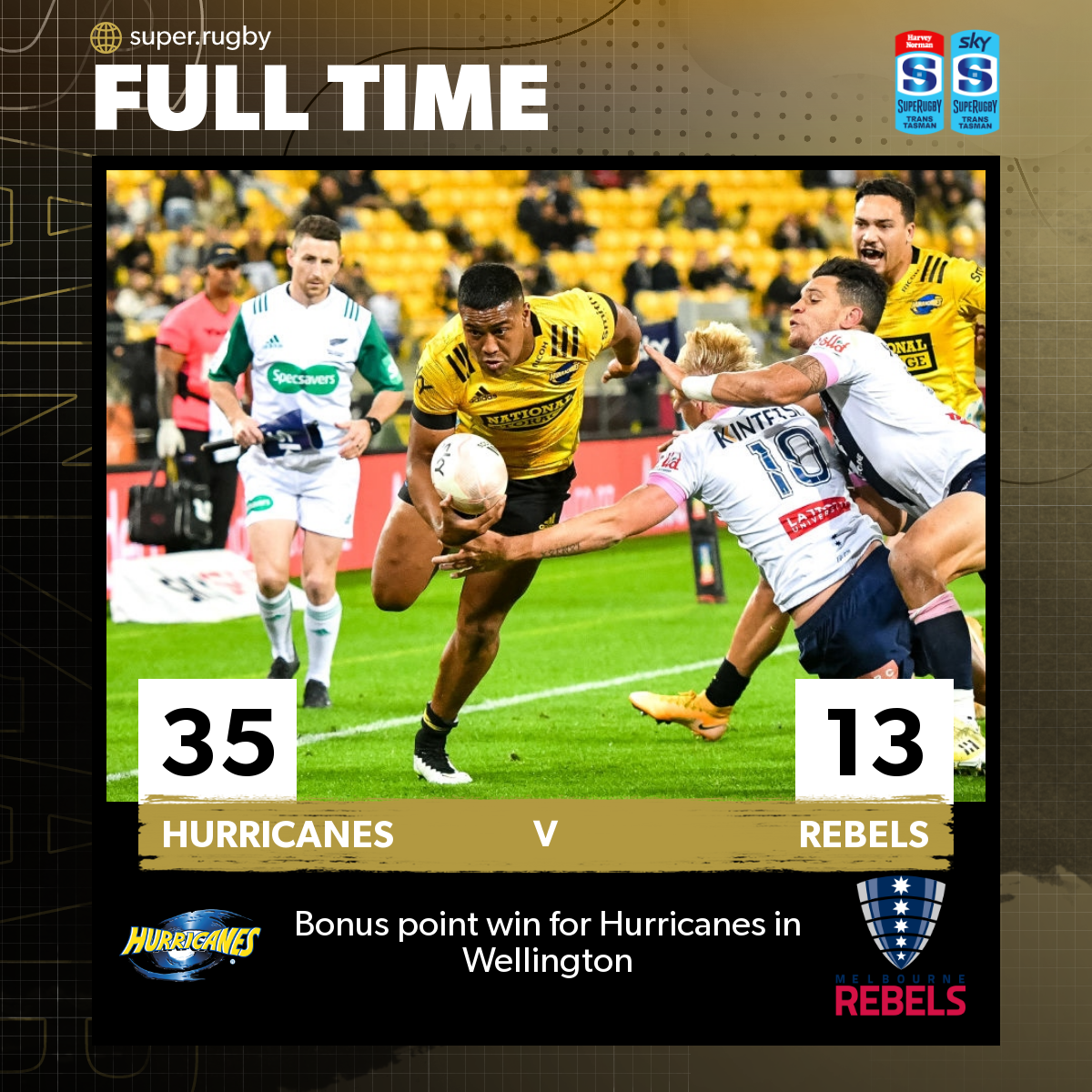