Impressive Crusaders too good for Hurricanes

The Crusaders continued with their impressive recent form when they claimed a deserved 24-13 win over the Hurricanes in Christchurch on Friday.

With this being a contest between the two leading sides in the New Zealand Conference – with only a point separating them in the standings before the game – there was plenty of hype and fanfare around this match which was played in atrocious weather conditions with heavy rain restricting play mostly to the forwards for large periods.

The home side eventually outscored the Hurricanes three tries to one and the result means the champions move five points clear of the men from Wellington at the top of the New Zealand Conference.

The opening 20 minutes was an arm wrestle with few pointscoring opportunities and neither side scored any points during that period.

The Crusaders had a chance to take the lead in the fifth minute, when Ardie Savea infringed at a ruck, but Richie Mo’unga’s penalty attempt was wide of the mark.

The home side eventually took the lead in the 24th minute when they set up a couple of phases from a lineout deep inside the Hurricanes’ 22, before Scott Barrett barged over from close quarters for the opening try.

Mo’unga added the extras but the Hurricanes narrowed the gap shortly afterwards when Jordie Barrett landed a monster penalty from the halfway line.

The next 10 minutes was a slugfest as both sides tried to gain the ascendancy but a Beauden Barrett penalty in the 37th minute was the only points scored during the rest of the half which meant the Crusaders held a slender 7-6 lead at the interval.

The tight nature of this game continued in the second half although the Crusaders were unlucky not to score their second try in the 47th minute when David Havili was held up by a superb tackle from Julian Savea as he crossed the Hurricanes tryline.

Referee Angus Gardner ruled that the visitors had strayed offside on defence and Mo’unga slotted the resulting conversion to extend the Crusaders’ lead.

And the home side pulled further ahead in the 51st minute when Michael Alaalatoa crashed over for their second try after the ball went through several phases, close to the Hurricanes tryline, in the build-up.

That try seemed to add a spring to the Crusaders’ step and they were the dominant side for the next 20 minutes. And they were rewarded with their third try in the 65th minute when Heiden Bedwell-Curtis made a break off the back of a scrum on the Hurricanes’ five-metre line and burst through a tackle from TJ Perenara before dotting down.

To their credit, the Hurricanes did not surrender and in the 72nd minute Reed Prinsep ran onto an inside pass from Ardie Savea, just outside the Crusaders’ 22 and beat three defenders on his way over the try-line.

That try added some respectability to the score but it came too late as the Crusaders held on for the win. 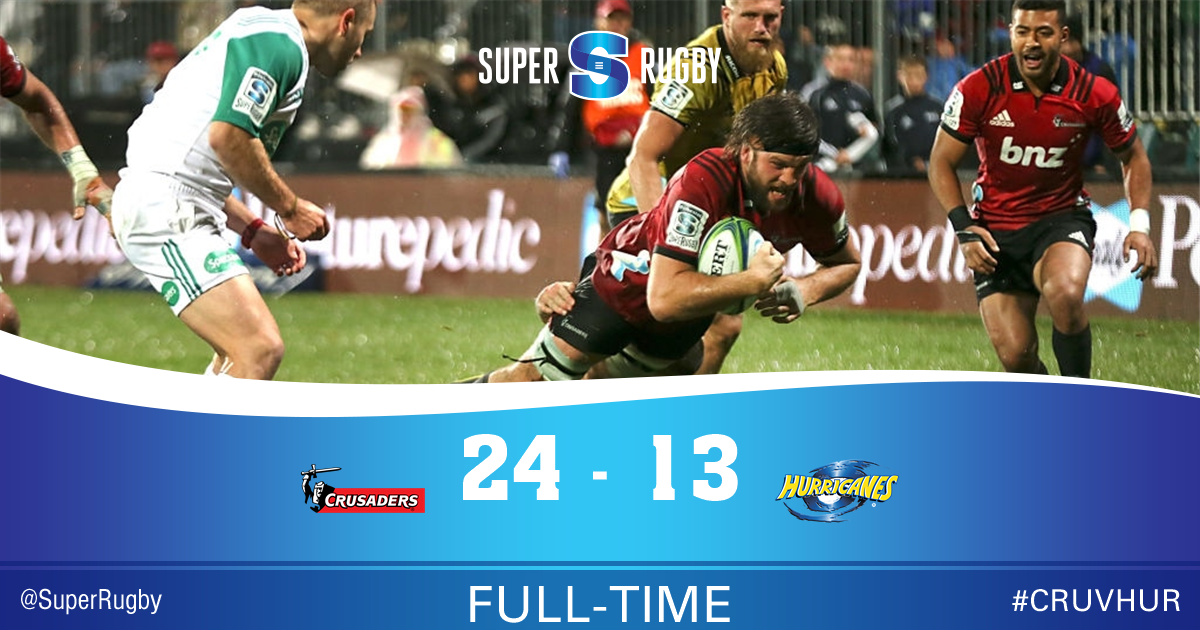