The Highlanders continued with their impressive recent form when they beat the Hurricanes 30-14 in their Super Rugby clash in Dunedin.

In a typical New Zealand derby, filled with plenty of thrilling action, momentum between the two sides ebbed and flowed before the Highlanders took control of proceedings late in the second half and they eventually outscored their visitors four tries to two.

The result means the Highlanders retain their unbeaten home record in 2018 and they provisionally move into third place onthe New Zealand Conference table, five points adrift of the Hurricanes, who are still in second spot behind the Crusaders.

The opening exchanges were evenly contested and we had to wait until the 11th minute for the opening points when Lima Sopoaga added a penalty after the Hurricanes were blown up for illegal play at a ruck.

The Hurricanes thought they had opened their account in the 14th minute when Ben Lam dotted down in the left-hand corner but his effort was disallowed when television replays showed that he was in touch while crossing the tryline.

Despite that setback, the Hurricanes continued to attack and 10 minutes later TJ Perenara attacked from the back of a scrum before passing to Beauden Barrett who drew in the final defender and offloaded to his brother Jordie, who rounded off under the posts.

Just before half-time, the Highlanders were dealt a blow when Liam Squire received a yellow card for a dangerous tackle on Julian Savea, who was lucky to remain on the field himself as he appeared to retaliate after Squire’s hit but television replays were inconclusive whether the All Black wing landed a punch.

Squire’s dismissal did not deter the Highlanders, who continued to attack, and on the stroke of half-time they caught their opponents by surprise when Aaron Smith played quickly from a penalty close to the Hurricanes’ tryline and offloaded to Jackson Hemopo, who got a pass out of the back of his hand out to Tevita Li, who dotted down in the left-hand corner.

Sopoaga’s conversion attempt was off target which meant the match was evenly poised at half-time with the Highlanders leading 8-7.

The hosts continued to dominate after the restart, and four minutes into the second half Ben Smith ran onto a pass from Li, close to the halfway mark, and beat three defenders before passing to Aaron Smith inside the Hurricanes’ 22 and the diminutive number nine had an easy run-in for his side’s second try.

Sopoaga was off target with the conversion attempt again which meant his side held a 13-7 lead but that situation would change shortly afterwards when Jeffery Toomaga-Allen crossed for the Hurricanes’ second try, after good work from Julian Savea Savea in the build-up and Beauden Barrett’s conversion gave the mean from Wellington a 14-13 lead.

But despite that score, the Highlanders finished stronger and on the hour-mark, Tyrel Lomax ran onto a pass from Aaron Smith deep inside the Hurricanes’ 22 before barging over from close quarters.

The Highlanders continued to attack and 10 minutes later, Waisake Naholo found himself in space midway between the visitors’ 22 and their 10-metre line and showed the cover defence a clean pair of heels before crossing for his side’s fourth try.

The Hurricanes launched several attacks in the game’s closing stages but the Highlanders kept them out with a resilient defensive effort. 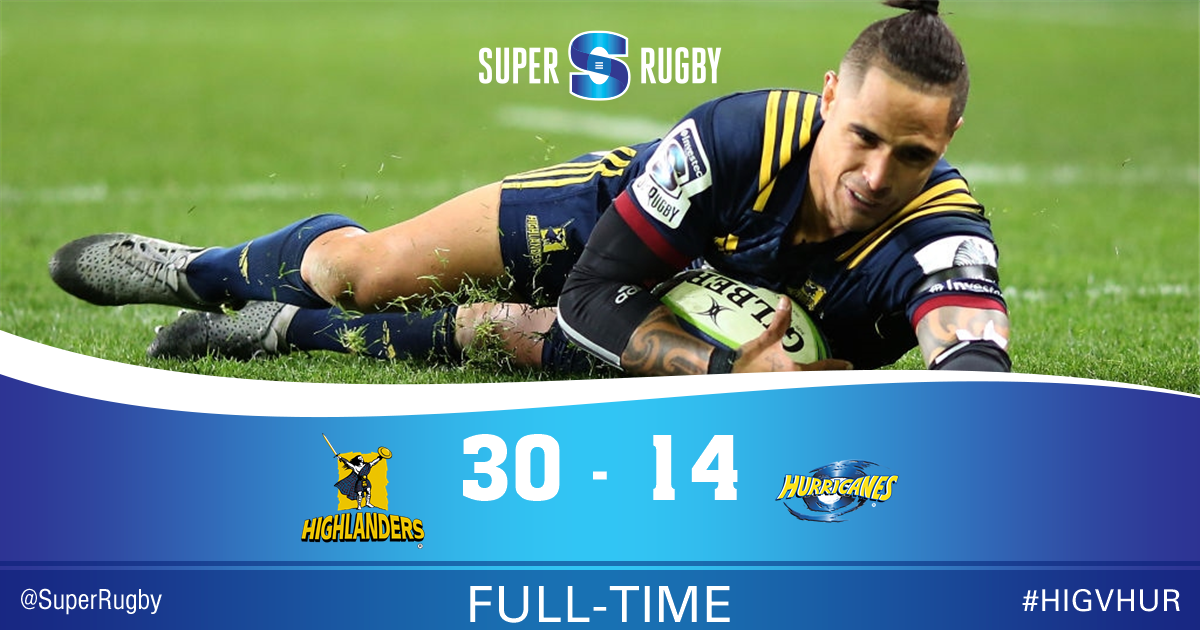