The Waratahs’ finals hopes are in tatters after the Jaguares recorded their second-consecutive away victory, defeating the hosts 23-15 in Sydney.

The eight-point win puts the Jaguares atop the South African conference on the Super Rugby ladder, four points clear of second-placed Bulls.

Meanwhile, the Waratahs are left to ponder what could’ve been, losing their eighth match of the season by a single-digit margin – victory in all three remaining fixtures appears to be their only chance of progressing to the knockouts.

Newly-developed Western Sydney Stadium hosted Saturday’s fixture, the hosts desperate to record their first Super Rugby victory over the Jaguares, who had to date never lost a match in Australia.

It was anything but an ideal start for the Waratahs, a knee injury forcing centre Karmichael Hunt from the ground within 60 seconds of kick-off.

With almost 70% possession in the first half, the Jaguares regularly bombarded their opposition’s defensive live with fiery runs off flat passes – however, neither side could unearth an early breakthrough and the games remained scoreless after 25 minutes.

The visitors finally broke the deadlock when Ramiro Moyano executed a perfectly-timed run to claim Jeronimo De La Fuente’s grubber-kick, scoring next to the left corner post. Domingo Miotti made no mistakes with the conversion.

The Waratahs were lucky to not immediately concede another five points, with only Lalakai Foketi’s lunging intercept in the 28th minute saving an almost-certain try on the right wing.

The hosts eventually got on the scoreboard when Bernard Foley slotted a simple penalty kick in the 36th minute, but less than two minutes later the Jaguares were awarded a penalty of their own, giving them a seven-point lead at the interval.

When play recommenced, a slick Jaguares backline spread the ball to the left wing and their quick hands ensuring Moyano secured his second try of the evening. Kurtley Beale’s lacklustre tackle attempt having no impact on the pacy Argentinian winger.

After Curtis Rona missed an opportunity to score, the Waratahs were granted seven points through a penalty try in the 55th minute when lock Pablo Matera collapsed a rolling maul on the try line – he was presented a yellow card, reducing the Jaguares to 14 men.

Then, when Nick Phipps dived over the try line in the 60th minute, the match seemed to be back in the balance. However, the TMO determined Foketi had placed the back half of his boot into touch and the try was disallowed.

The men in blue didn’t have to wait much longer for another opportunity to score. Skipper Michael Hooper cleaning up a sloppy pass and shipped the ball to Curtis Rona, who utilised an overlap to complete the try. Foley’s conversion struck the post, so the margin remained at two.

Once the Jaguares had 15 men back on the field, they resumed peppering the opposition’s defence with less than ten minutes left. A Waratahs error in the ruck gifted the visitors another three points, extending their lead to five.

A classy flick from Adam Ashley-Cooper set up a linebreak for Foley in the 76th minute as the Waratahs chased victory. However Foley lost the ball in possession after a potential try-saving tackle from Matias Orlando.

With minutes remaining the chance to take an infallible 8-point lead was turned own by the Jaguares who instead opted to kick for touch. A decision that seemed careless when the Waratahs regained possession two phases after the line out.

Regardless, with the Waratahs stuck in their half as the full-time buzzer sounded, visibly tired and struggling to penetrate the Jaguares defence, a subsequent penalty to the Jaguares confirmed an away victory for the Argentinian side. To rub salt in the wounds, Joaquin Diaz Bonilla’s successful three points denied the Waratahs a bonus point. Final score 23-15. 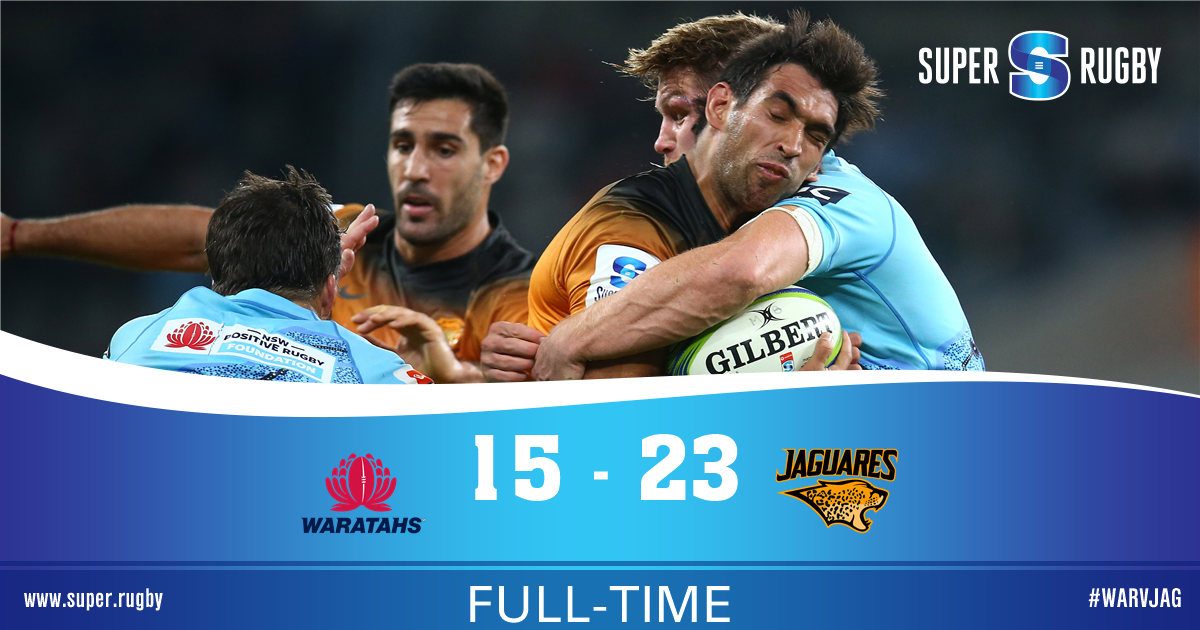