The Rebels continued with their start to the Super Rugby season when they claimed a 33-10 victory over the Brumbies in Melbourne on Friday.

The home side delivered an impressive all-round performance and outscored the Brumbies five tries to two with Reece Hodge finishing with an 18-point haul courtesy of a brace of tries and four conversions.

The result means the Rebels have won all three their matches with bonus points in this year's competition and they are currently in first position on the Australian Conference table.

The opening exchanges were evenly contested although the Rebels suffered a setback in the ninth minute when Jordan Uelese was yellow carded for a cynical infringement on defence close to the try-line.

The Brumbies opted to take a scrum from the resulting penalty on the Rebels' five-metre line and shifted the ball to the wing where Chance Peni beat Dane Haylett-Petty before dotting down in the corner.

The next 15 minutes was an arm wrestle as the sides tried to gain the ascendancy but poor decision making and unforced errors from both teams meant that no points were scored during this period.

In the 29th minute, the home side finally opened their account when Amanaki Mafi made a break from the back of a scrum inside the Brumbies' 22. He still had work to do but did well to sell the defence a dummy before placing the ball at the base of the post.

Hodge added the extras and three minutes later he crossed for his side's second try, from close quarters after his forwards took the ball through a couple of phases in the build-up.

Hodge converted again which meant the Rebels led 14-5 at half-time but to their credit, the Brumbies came out firing after the interval and were rewarded in the 55th minute when Henry Speight crossed for their second try.

This, after he gathered an inside pass from Kyle Godwin and he did well to spin out of a Marika Koroibete tackle before powering his way over the try-line with two defenders on his back.

Once again, the Brumbies failed to convert their try but with the score 14-10 to the Rebels, the visitors were back in this game. In the 63rd minute, things went pear-shaped, however, when Leslie Leuluaialii-Makin was sent to the sin bin for a defensive indiscretion deep inside his 22.

That spelled the death knell for the visitors as the Rebels scored three tries during Leuluaialii-Makin's stint off the field.

Hodge got the first - and his second one - in the 65th minute after gathering a long pass from Will Genia inside the Brumbies' 22 before Joe Maddocks and Michael Ruru made sure of their side's win with long range efforts during the game's latter stages. 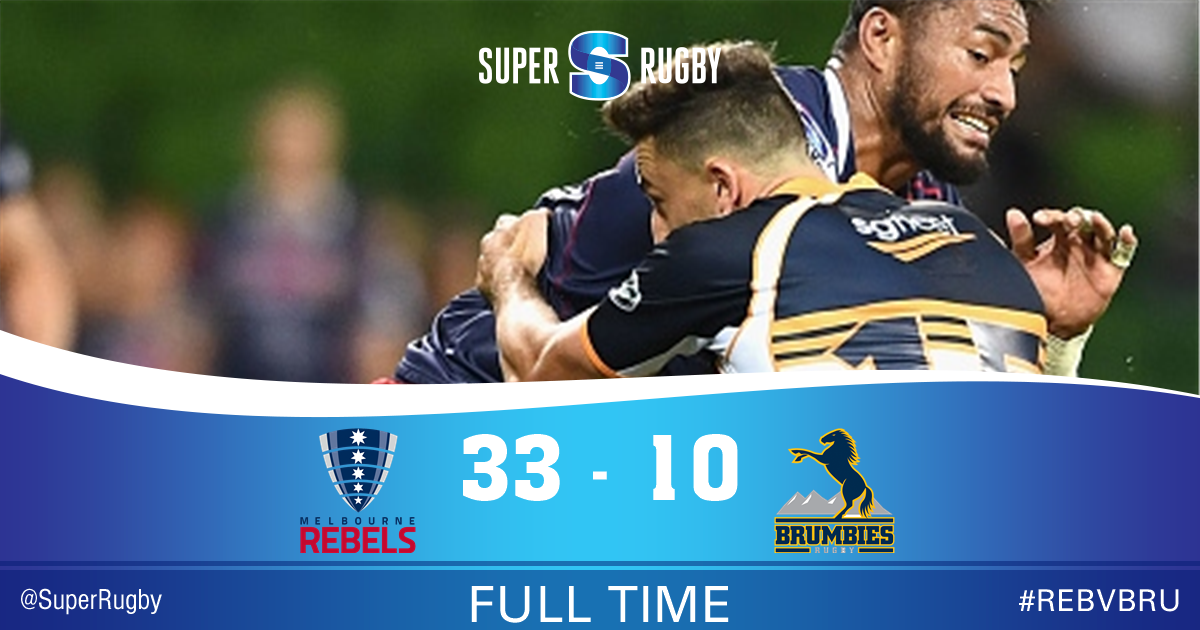