The Crusaders made it two wins from two as they cruised to a 38-22 victory over the Hurricanes in a thrilling Super Rugby Round Two encounter in Christchurch.

Scott Robertson steered the Crusaders to a narrow win over the Blues in their opening fixture, while the 'Canes edged past the Tahs in their Round 1 encounter.

However, it was the Crusaders who dominated proceedings at Christchurch Stadium, producing a strong first-half showing and scoring four tries to leave the Hurricanes with a mountain to climb after the half-time break.

The hosts didn't take long to open their account, Scott Barrett going over the line on the left after a couple of chances, with Richie Mo'unga failed to slot home the conversion.

Mo'unga finally added his name to the scoresheet in the 23rd minute to make it 10-0 to the hosts, but again failed to hit the mark from the conversion.

The Hurricanes were still reeling from the second try when the Crusaders struck again two minutes later, Jordan Taufua racing over on the left flank after some great team play involving David Havili and George Bridge in the build-up. Mo'unga converted to make it 17-0 and put the home side firmly in the driver's seat.

Mo'unga bagged a try and conversion on the stroke of half-time as the ruthless Crusaders forged a big lead against a shell-shocked 'Canes outfit.

The visitors managed to produce a much-improved performance after the interval, adding four tries, but they were unable to limit the attacking threat of the hosts.

Scott Barrett again got in on the action early on, powering straight through the defence after a lineout and scoring his second try of the match, Mo'unga converting with the wind now at his back.

The Hurricanes finally opened their account two minutes later, Ben Lam scoring a try amid a heap of tackles, although Jordie Barrett failed to convert.

Wes Goosen added a second try for the visitors in the 66th minute, but Barrett dragged the conversion wide as the Hurricanes looked to claw their way back into contention.

However, the match was effectively over as a contest in the 76th minute as George Bridge took the ball over the line following after a lineout, substitute Mitch Hunt making no mistake with the conversion.

The Hurricanes didn't let their heads drop, though, and added two more tries in the last few minutes to add a semblance of respectability to the scoreline.

Lam scored his second try of the game in the 79th minute, before substitute TJ Perenara raced over the line after a great run and a dummy pass.

It was a case of too little, too late, however, as the Crusaders won by a comfortable margin.

But admirably the Hurricanes weren’t done and Lam’s brace and a last-ditch score from TJ Perenara would deny the Crusaders the bonus-point. 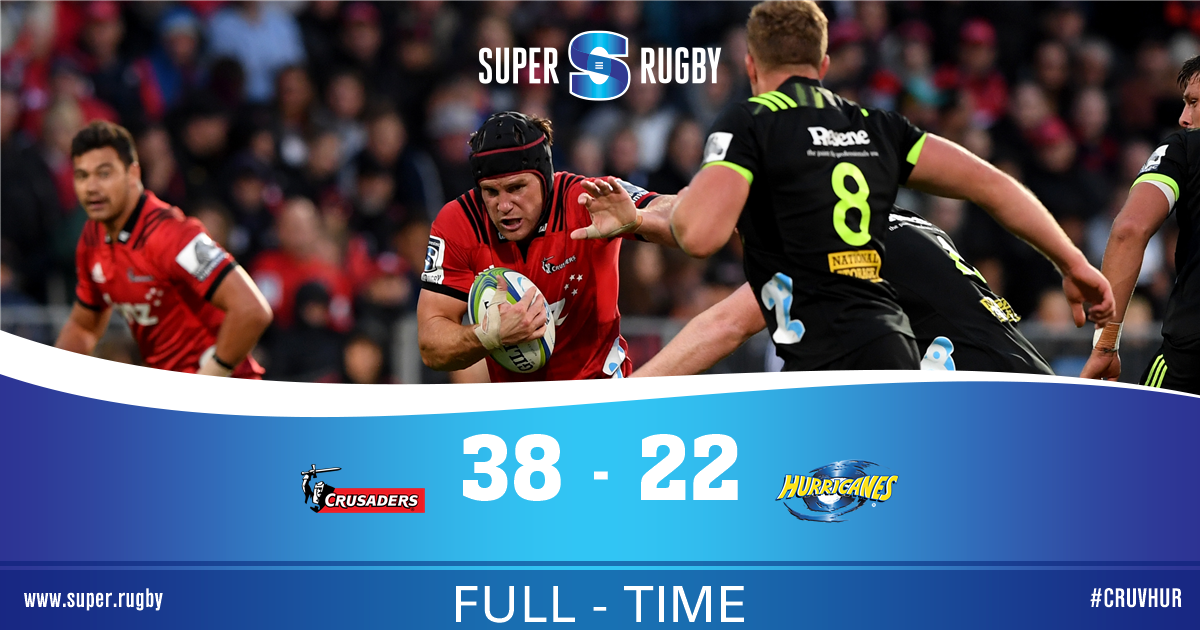