While the 'Tahs were able to finish with a flourish and score two late tries to make the scoreline look a bit more respectable, in reality they were thoroughly outplayed, with the Rebels racking up 33 unanswered points before taking their foot off the gas in the final five minutes.

The result means the improving Rebels have now won two in a row after losing their first two, while the Waratahs crash to their fourth straight defeat of the season.

The Waratahs broke the line early through none other than prop Harry Johnson-Holmes, who collected a quick pop pass and went barging into Rebels territory before an intercept pass a couple of phases later saw the hosts clear the danger.

Not long after, the Rebels found themselves on the attack on the end of the field, where Matt Toomua was happy to take the points on offer following a Waratahs infringement.

A great steal at the breakdown from Richard Hardwick put the Rebels on the attack again, and this time they set up the line-out before their rolling maul drove it all the way to the line, though the referee wasn't able to determine the ball had been grounded.

The Rebels continued to look threatening and finally managed to crack the Waratahs defence in the 12th minute with a peach of a try, as some beautiful interplay and deft offloading between the backline players saw them cut through the opposition and take the ball over 50 metres for a sizzling five-pointer. Lachlan Anderson got the score, but Tom Pincus, Reece Hodge and Stacey Ili all played their part in the build-up.

The Waratahs had an opportunity to reduce the deficit moments later but Jack Maddocks, taking the penalty shot instead of Will Harrison - who it turned out was nursing an injury - couldn't find the target.

Toomua was happy to extend the Rebels' lead when they were offered a shot at goal from right in front, and it wasn't long before he was given a chance to do it again when the Waratahs strayed offside, as the home side moved 16 points clear.

With three minutes to go in the half, the Rebels conjured up their second try, but while the first was a spectacular team effort, the second was all Toomua, as he sold a big dummy and ran into a massive gap before chipping over the top and taking full advantage of a favourable bounce to recollect the ball and touch down. Toomua nailed the conversion from the sidelines as well as the Rebels headed into the break with a formidable 23-0 lead.

The Waratahs had a good chance to hit back early in the second half, but they continued to let themselves down with unforced errors and poor execution at crucial moments, much as they'd done in the first stanza.

As a result, the Rebels were able to maintain their stranglehold on the match without too much trouble, a hold that only got tighter when Reece Hodge - taking over for Toomua who had been given an early rest - slotted his first penalty of the evening following a breakdown infringement.

The Waratahs spent a lengthy period camped in the Rebels 22 shortly after the hour-mark, but a scrum penalty ultimately saw the attack come to naught.

Instead, it was the Rebels who put the result beyond any question when a patient and potent driving maul took a pumped-up Jordan Uelese over the line.

With three minutes to go, 'Tahs fans were finally given something to smile when some smart passing between the backs and forwards - first to the outside and then back inside - saw Jeremy Williams crash over the line for their first points of the evening.

There was time for one more consolation try from Jack Maddocks as well after an incredible move that started inside their own 22, but it likely did little to raise the mood of the Waratahs camp. 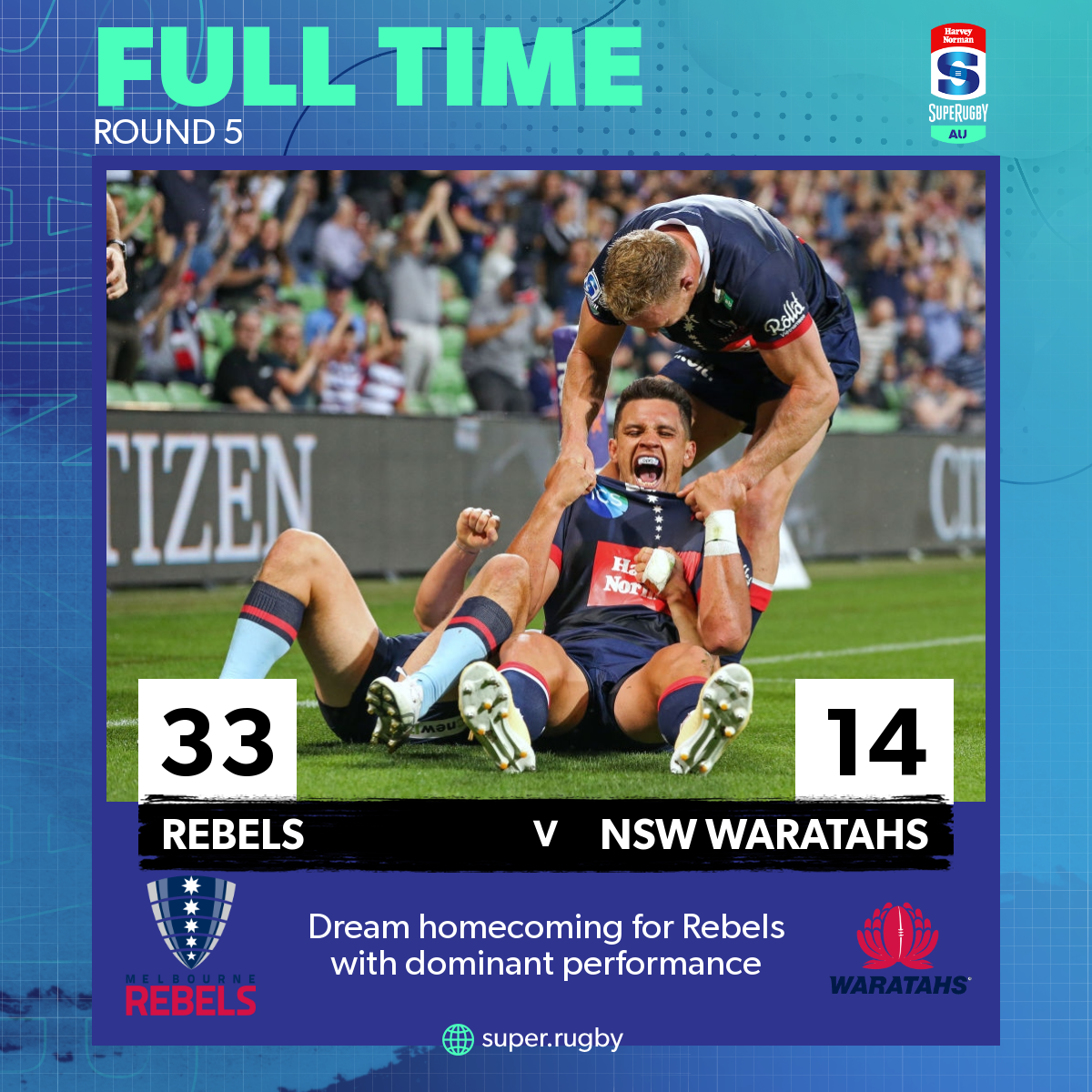