Jaguares secured a place in the Super Rugby semi-finals for the first time after battling their way to a hard-fought 21-16 victory over Chiefs in Buenos Aires.

In an outstanding game, the Argentinians began impressively, taking an 8-0 lead via Pablo Matera's try and Joaquin Diaz Bonilla's three-pointer, but the New Zealanders hit back with 16 unanswered points.

Lachlan Boshier's converted score reduced the deficit before two Jack Debreczeni penalties and another from replacement Marty McKenzie gave them the advantage in the second period.

Back came the Jags, however, and after Matias Moroni had given them hope by touching down, Diaz Bonilla kicked successive efforts off the tee to win a bruising encounter against a much-improved Chiefs side.

With their big forwards back, the New Zealand outfit have been a completely different proposition and went into the play-offs with momentum following impressive victories over the Crusades and Rebels.

Brodie Retallick and particularly Sam Cane have shown their world-class quality since returning to the fold, but those two were peripheral figures in the first quarter.

Gonzalo Quesada's men controlled matters and opened the match in ideal fashion when the visitors lost possession in their 22. The ball was then shifted wide and, under pressure, the Chiefs yielded when Matera crossed the whitewash from close range.

Mistakes were prevalent from the away side and they conceded again as Diaz Bonilla kicked a three-pointer, but Colin Cooper's charges soon started to find their rhythm.

Although there were knock-ons aplenty, they regularly challenged the hosts' defensive line and it was eventually breached by Brad Weber, who sniped around the fringes and found Boshier on his shoulder to score.

Debreczeni's conversion closed the gap further before the fly-half added to his team's tally by kicking a penalty for a two-point buffer at the interval.

The Chiefs then began the final 40 minutes on the front foot and were rewarded by the accuracy off the tee by Debreczeni and McKenzie, who came onto the field after the starting pivot pulled up injured.

At that point, Cooper's men were in control but the Jags responded magnificently. They went back to what had served them so well this season and moved the ball with tempo, regularly stressing the opposition rearguard.

After their positive start, Quesada's outfit had been far too conservative but those inhibitions were duly released and a brilliant attack ended in Moroni touching down unopposed.

Momentum was now with the home team and quick-fire three-pointers from Diaz Bonilla took them 21-16 ahead going into the final 10 minutes.

The Chiefs attempted to respond and duly increased the intensity, moving to within inches of the line, but outstanding defence saw the Jaguares withstand the pressure and progress to the semi-finals, where they will host either the Brumbies or Sharks. 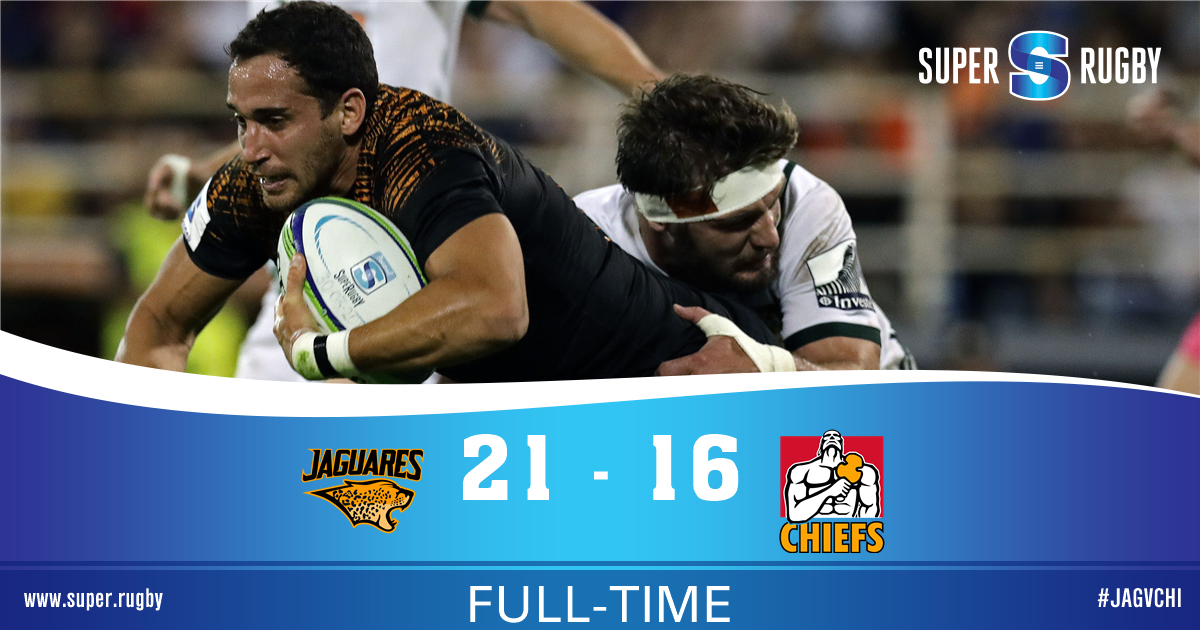