Jaguares get the better of Bulls

The Jaguares claimed their third Super Rugby win of the season with a 39-24 victory over the Bulls at Loftus Versfeld on Saturday.

It was a game with plenty of tries and lots of poor defending from both sides, which made for an entertaining spectacle.

The Argentines dominated the lineout as they didn't lose 15, while stealing four of the Bulls'.

The Jaguares scored the first try in the fifth minute when full-back Santiago Carreras made the linebreak and drew the last defender before releasing Emiliano Boffelli to finish in the left-hand corner with Joaquin Diaz Bonilla unable to convert from the touchline.

But the Bulls bounced back immediately. Jaco Visagie produced a lovely deft pass to release Marco van Staden in the left-hand corner with the Bulls 'bone collector' smashing through Jaguares scrum-half Gonzalo Bertranou to dot down. Fly-half Morne Steyn added an excellent conversion from out on the touchline to give the hosts a 7-5 lead.

Soon after, the Jaguares won a penalty for Rosko Specman not rolling away after the tackle just outside the Bulls 22 and kicked for touch. Rodrigo Bruni was allowed to slip through the bodies at the resulting driving maul for a simple finish which would have made the Bulls rue their non-existent defending.

The Bulls scored a wonderful team try seven minutes from half-time. Johnny Kotze was heavily involved as a well as Warrick Gelant, who was the one to dot down on his 50th Super Rugby appearance after a flowing move. Steyn landed another magnificent penalty from out on the touchline for a 14-10 lead.

However, the topsy-turvy nature of the game continued as the Argentine outfit responded with their second try. While the Bulls' try just before may have been brilliant, this one was even better. A superb break in centre midfield and a beautiful offload allowed Guido Petti to show surprising gas for a lock and cross the whitewash.

And from the kick-off, Gonzalo Quesada's side went up the other end of the field and Diaz Bonilla spotted plenty of space in behind the Bulls defence, producing a deftly-weighted kick for Matias Moroni to dot down in the left-hand corner as Bonilla slotted home the conversion for a 24-14 lead.

The home side started the second half on top and were deserved with the try. With nothing on, Specman made an absolutely sensational line break and mazy run before being halted five metres out. The ball was recyled to the right-hand corner with quick hands where Cornal Hendricks was able to dot down on the overlap. Steyn's kicking continued to be immaculate to cut the deficit to three points at 24-21.

The Bulls were reduced to fourteen men in the 48th minute when centre Johnny Kotze was yellow-carded for a high tackle.

The Jaguares opted for the scrum and exploited the extra man advantage with an excellent cross-kick from Diaz Bonilla allowing Boffelli to dot down in the left-hand corner. Diaz Bonilla added the extras for a 31-21 lead.

Diaz Bonilla was shown a yellow card soon afterwards for tackling Specman on the ground but the Bulls failed to capitalise on their numerical superiority.

The Bulls' discipline was costing them on the night as the Pretoria-based side were conceding over twice the amount of penalties as their opponents.

Replacement hooker Santiago Socino got himself on try column with eight minutes to go, going over at the back of a well-worked driving maul as the decision to go for the corner despite being down to ten men was vindicated. 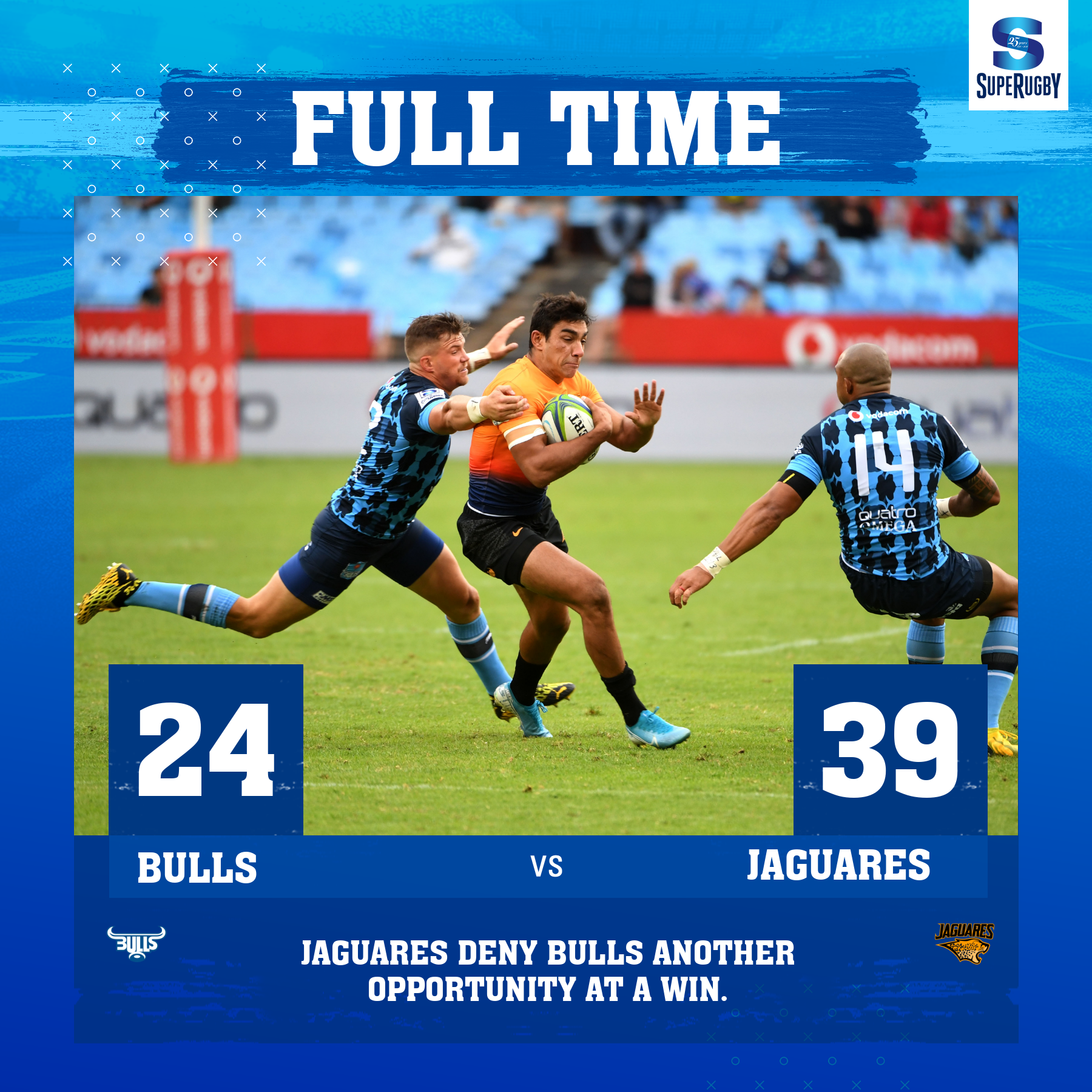