The Jaguares were helped by a late penalty try as they defeated the Stormers 30-25 in Buenos Aires.

The victory sees the Argentine outfit move to within one point of South African conference leaders the Sharks, and into sixth place overall.

There were ominous signs for the Stormers early on when Pablo Matera strolled over for the simplest of tries five minutes in. After a couple of phases the Jaguares had too many numbers out wide and it was fullback Emiliano Boffelli who popped it to Matera to run in under the posts.

Domingo Miotti slotted the easy conversion and then added another penalty a few minutes later after the Stormers back were caught offside as the Argentines raced to a 10-0 lead.

The visitors didn't allow their heads to drop, however, and came back strongly in the remainder of the half, helped in no small part by some ill-discipline from their opponents, particularly at scrum time.

The Jaguares conceded a series of kickable penalties and Stormers flyhalf Jean-Luc du Plessis was happy to oblige, kicking three straight to get it back to a one-point ballgame.

The home side would have the final say in the first half with a three-pointer of their own, however, after the TMO spotted a high tackle from Eben Etzebeth, as it ended 13-9 at the break.

The Jaguares shaky scrum cost them again early in the second half, as they gave away another penalty that Du Plessis promptly converted.

They were full value for their second try of the afternoon, however, a wonderfully-worked backline move that ended with winger Ramiro Moyano crossing over in the corner before Miotti added the extras from the touchline to make it 20-12.

The Jaguares' poor discipline continued to keep the Stormers in the game as the visitors added two more penalties, this time courtesy of Damian Willemse who had taken over the kicking duties.

But the shoe was soon on the other foot when the hosts added another three-pointer of their own in what was turning out to be a very scrappy affair.

The Jaguares were then awarded a penalty try in the 71st minute when JJ Engelbrecht was left with no choice but to knock down a pass that would have resulted in a certain score.

The centre received a yellow card for his troubles, as the Jaguares took a commanding 30-18 lead.

The Stormers looked dead and buried, but somehow they managed to conjure up a try courtesy of Sevens star Seabelo Senatla after a break-off from the scrum, allowing Damian Willemse to add the extras and bring them back to within five points with five minutes to play.

A late penalty gave the visitors one last chance to mount an attack and score a winning try, but the Jaguares managed to win possession and kick the ball into touch to bring the match to an end. 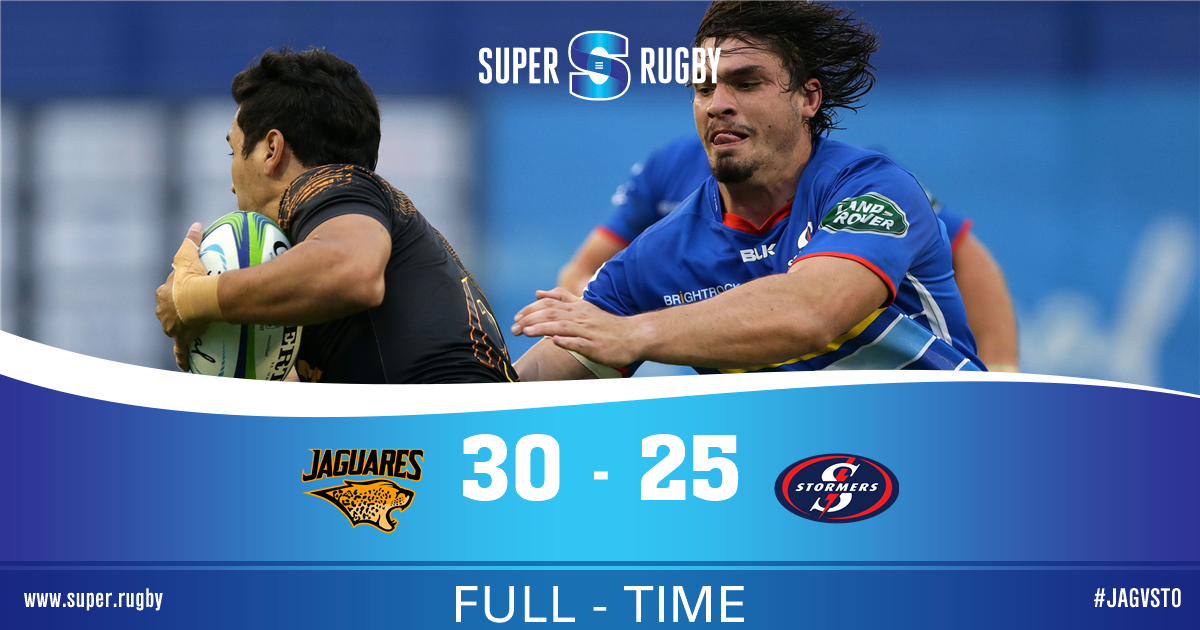