The Jaguares made it six wins in a row on Friday as they saw off the Sharks 29-13 in Buenos Aires to close the gap on the Lions at top South African Conference.

This incredible run of form continues thanks to tries from Ramiro Moyano (3) and Bautista Delguy, with Nicolas Sanchez kicking 14 points.

Unfortunately for the Jaguares, however, their campaign now takes an unwanted break until late June when they return against the Stormers.

The Sharks, whose try came via Ruan Botha, are on 28 points and due to the Rebels winning earlier, have dropped out of the play-off spots.

The Sharks were very much second best in the opening 40 as the Jaguares, with their tails up, gave themselves a handy 17-7 half-time lead.

Sanchez opened the scoring in the 13th minute with a simple penalty goal after Sharks tighthead Thomas du Toit was penalised at scrum time.

The Sharks should have responded four minutes later but Robert du Preez unforgivably missed a penalty from 20 out that was also in front.

The Jaguares made him pay just before the half-hour mark as, after Curwin Bosch's long-range attempt, Emiliano Boffelli broke through before slick handling led to Marcos Kremer popping over a tackler to Moyano for a simple run in. Sanchez made it 10-0.

Moyano scored again four minutes later with this coming thanks to an error from Sbu Nkosi, who knocked the ball forward in his own in-goal area. That led to a Sharks team-mate picking up the ball and the Jaguares would then go quickly to the left wing where Moyano made it 17-0.

Fortunately for the Sharks they did get on the board on the stroke of half-time as an intelligent line-out move allowed Botha to get over.

The Sharks further reduced the margin to seven points on 50 minutes when Du Preez kicked a penalty after the Jaguares infringed at a ruck.

17-10 became 17-13 four minutes later as this time Sanchez was penalised for going off his feet, Du Preez firing the three over with ease.

But back came the Jaguares with real purpose and they thought they'd crossed through Guido Petti before he was denied for double movement.

The Sharks would also go close to a try but they were denied due to a knock-on, with the game fascinatingly poised at 17-13 on 66 minutes.

However, the impressive Moyano's break on halfway then sparked a breakout from the Jaguares, with Delguy on his shoulder to make it 24-13. To make matters worse for the Sharks, Botha was sent-off shortly after due to making shoulder contact with the head of a player at a ruck.

The Jaguares sensed blood and were pushing for the bonus-point try, which came at the death as Moyano completed his hat-trick to put further pressure on the Lions. 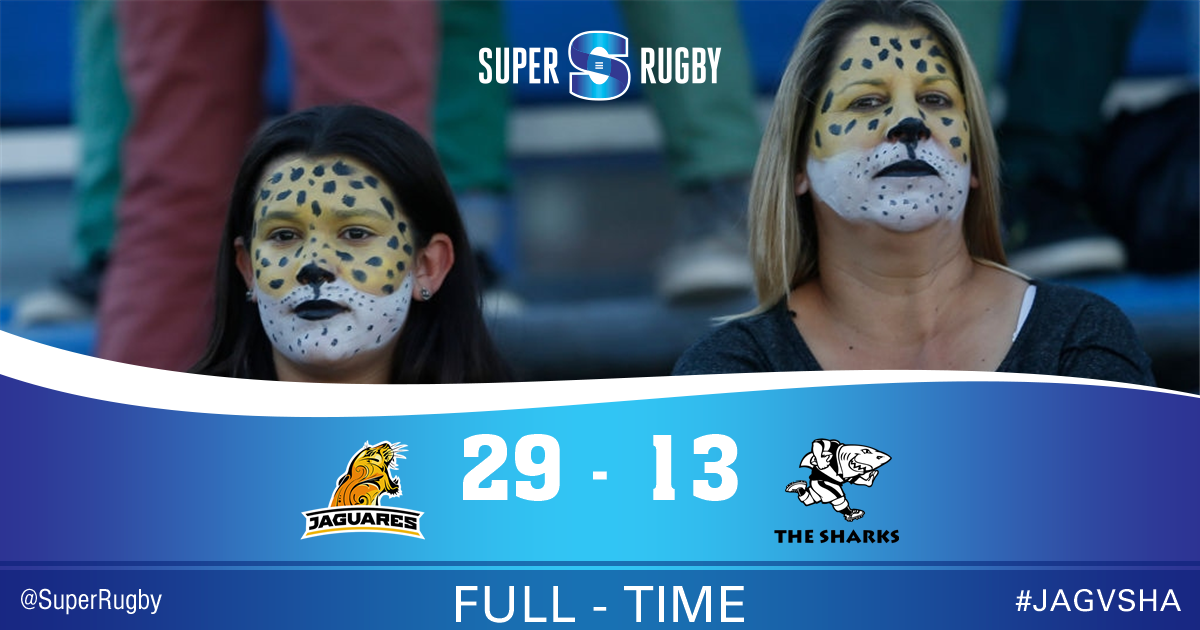