The Jaguares missed the opportunity to overtake the Lions in the South African Conference after a disappointing 43-34 defeat to the Bulls at Loftus Versfeld.

Johnny Kotze, Embrose Papier and Jesse Kriel all touched down for a two-point advantage before Handre Pollard extended that buffer in the second period.

Bertranou completed his brace after the interval but efforts from Jamba Ulengo and Marco van Staden effectively secured the victory. Although Emiliano Boffelli kicked a penalty for the Jaguares, Ulengo’s second ended the match as a contest, even though Matera had the final word for the visitors.

Following a disappointing season, this is a timely fillip for the South African team. John Mitchell’s men were constantly opened up by the Sunwolves in the previous round and those deficiencies were once again evident in Pretoria, but they were eventually rectified.

The Jaguares were rampant early on. Their accuracy was impressive and, in comparison to their performances in the Argentina jersey, Mario Ledesma’s charges were a threat in attack.

They duly scored two tries inside 10 minutes, both of which were excellently worked. The Bulls’ rearguard, and particularly Divan Rossouw, will have been disappointed by the first, but Sanchez did well to get on the outside and cross the whitewash in the right-hand corner.

With confidence high, the Argentinians went wide from the restart and put together a wonderful move. Sanchez picked out Javier Ortega Desio, allowing the number eight to break the gain line, and he combined with Bertranou to send Matera over.

After creating the second try, the scrum-half was rewarded for his superb support lines, receiving Tomas Lezana’s pass to touch down unopposed.

To their credit, the South Africans responded and, inspired by Warrick Gelant, they got themselves back into the contest as the full-back fed Ulengo and the wing gave Kotze a simple run to the line.

The Jaguares were still in control but they began to make errors and the hosts capitalised with Papier scampering across the whitewash and Kriel doing the same, after he intercepted a stray pass.

Mitchell’s charges opened the second half as they ended the first and earned a penalty opportunity, which Pollard kicked, for a 24-19 advantage.

Ledesma’s side hit back, however, when Emiliano Boffelli spotted some space in the opposition defence and Bertranou was once again on hand to finish off.

The Bulls were much improved, though, and two quick-fire tries from Ulengo and Van Staden gave them a 10-point buffer heading into the final quarter.

Boffelli reduced the arrears from the tee but the hosts completed a deserved win when Ulengo touched down, despite Matera’s late consolation. 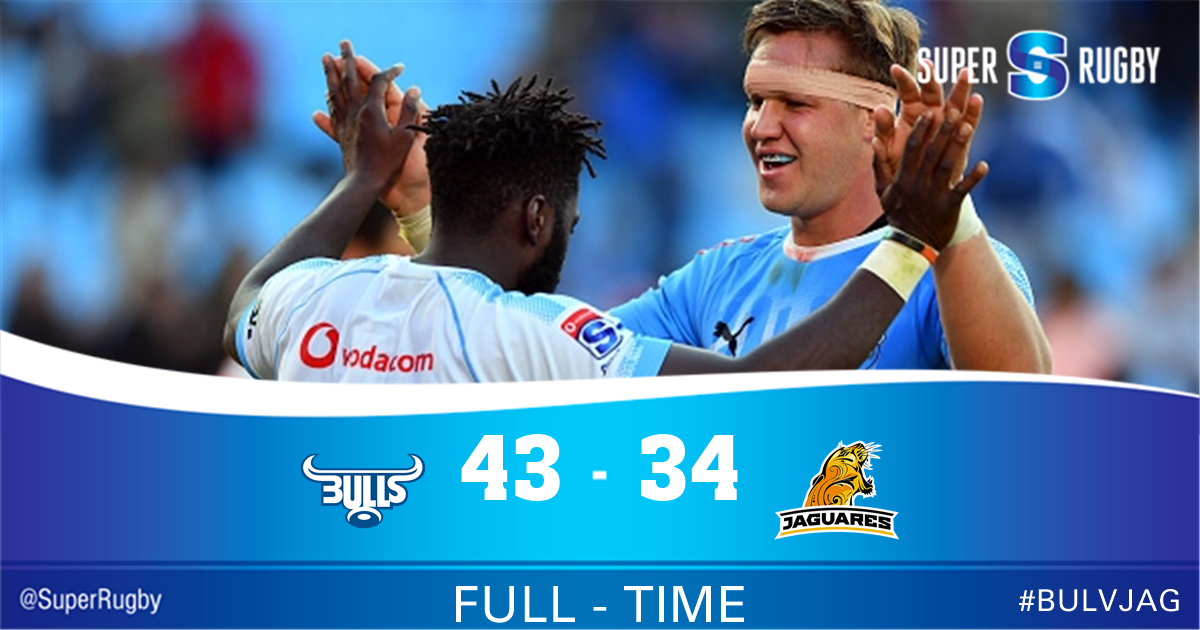