The Jaguares secured their first ever victory over a New Zealand side when they claimed a 20-13 win over the Blues in Auckland on Saturday.

In atrocious weather conditions the Buenos Aires-based outfit were better at mastering the wind and rain and eventually outscored the Blues three tries to two.

The Blues suffered an early setback when Akira Ioane was yellow carded for collapsing a Jaguares maul close to his try-line in the 13th minute.

From the resulting penalty, the Jaguares put the ball into touch on the Blues' five-metre line and launched another lineout drive before Agustin Creevy barged over for the opening try from close quarters.

The visitors could not add to their points tally for the rest of Ioane's stint in the sin bin and that proved costly for the men from Buenos Aires as the Blues took control of proceedings for the next 25 minutes and scored two tries during that period.

The home side opened their account in the 17th minute when, after an extended period camped inside the Jaguares' half, Stephen Perofeta threw a long pass to Tumua Manu, who went over in the left-hand corner.

Perofeta's conversion attempt was wide of the mark but the home side continued to dominate and spent large periods camped inside the Jaguares' half. And in the 28th minute, they took the ball through 10 phases inside the visitors' 22 before Matt Duffie showed great determination to dive over the try-line from close quarters despite the attentions of three defenders.

Perefota was off target from the kicking tee again but made up for that miss when he slotted a penalty in the 36th minute after Creevy was blown up for going off his feet at a ruck.

The Jaguares finished stronger though and were camped close to the Blues' try-line during the latter stages of the half.

They were handed several penalties during this period but instead of kicking for goal, they opted to take several scrums but despite dominating at the set-piece, they could not score any points. James Parsons eventually won a crucial turnover for the Blues, who went into the break holding a deserved 13-5 lead.

But things went pear-shaped for the home side after the break as the Jaguares were dominant during the rest of the match and kept the Blues scoreless during the second half.

In the 54th minute, Jeronimo De La Fuente tore the home side's defence to shreds when he set off on a mazy run before his progress was halted inside the Blues' 22. The ball was recycled quickly and shifted to Emiliano Boffelli, who crossed for the Jaguares' second try and although Nicolas Sanchez failed to convert, the game's momentum was now with the visitors who continued to dominate as the half progressed.

And in the 62nd minute, they regained the lead when Tomas Lezana ran onto a pass from Martin Landajo close to the Blues' try-line before crashing over for a deserved try. Sanchez's conversion made it 17-13 to the visitors and in the 67th minute he added a penalty after Kara Pryor infringed at a ruck. 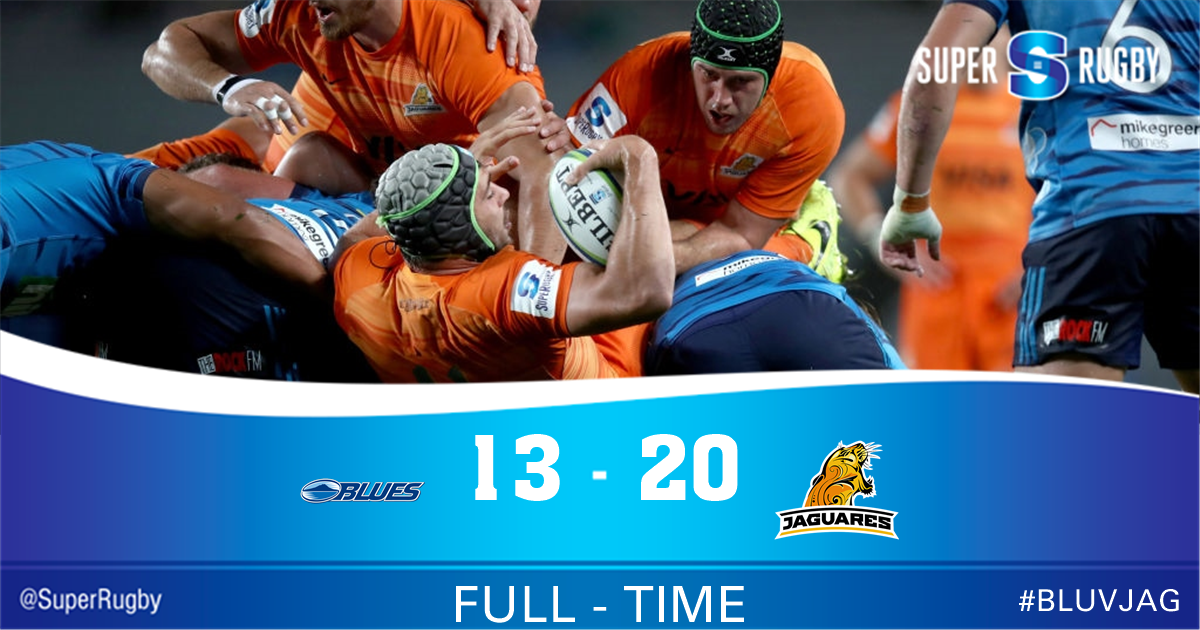