The Jaguares turned around a 21-point deficit to win their first ever Super Rugby game 34-33 against the Cheetahs in a thrilling contest.

A ruthless first half and surprisingly competitive scrum from the Cheetahs helped them build an enormous 24-3 lead, as major problems with indiscipline looked to have killed off the Jaguares’ aspirations before ever half an hour had passed.

Martín Landajo and Nicolás Sánchez were both sin-binned within the opening quarter but the Argentine franchise responded well, completing a large comeback five minutes after the interval through a converted try by Rodrigo Báez.

Landajo’s remarkable second try, a contender for try of the year, gave the Jaguares the lead deep into the second half as Sánchez and Cheetahs' flyhalf Fred Zeilinga went back and forth trying to secure an opening day win, with the honours going to the visitors.

Dominant at the breakdown throughout, the Jaguares experience of Test match rugby shone through when the going was tough and they required cool heads, with the outstanding Sánchez stealing the show.

First Sánchez and then Zeilinga missed penalty attempts at the posts to open the scoring, before the game’s first try.

Forcing a loop move between Sánchez and Jerónimo e la Fuente off the lineout, Cheetahs captain Francois Venter burst out of the defensive line to intercept the loose second pass from Sánchez before racing to the line.

Sánchez responded immediately from the restart with a penalty for the Jaguares’ first points in Super Rugby and the visitors looked dangerous in attack after a break from Emiliano Boffelli.

But rather than the Jaguares scoring a first try from that attack, Sergeal Petersen intercepted, bouncing out of tackles on a 90-metre run to just short of the line when he was stopped illegally by Sánchez, who was yellow carded.

Torsten van Jaarsveld looked to have scored from the resulting five-metre lineout, however the replays showed that the ball had been dislodged deliberately by the leg of Landajo, leaving both Jaguares half-backs in the sin bin.

Clinically making the most of their personnel advantage the Cheetahs put themselves in try bonus point territory with their third score, Zeilinga looping around the back of the maul and feeding Van Jaarsveld.

William Small-Smith’s score in the corner then made it four tries for the hosts, but the Jaguares were arguably fortunate to not go down another man after a late charge with the knee from Tomás Lavanini.

Referee Stuart Berry penalised the lock by giving the Cheetahs a penalty on halfway from the restart, but Zeilinga couldn’t convert.

Back to a full XV, the Jaguares made the Cheetahs pay with their first ever try in the tournament. Coming off a maul, Agustín Creevy broke and offloaded out the back to Landajo for the score.

The Jaguares’ resurgence continued as another maul ended with Creevy this time crashing over, the conversion from Sánchez making it 24-17.

Their next try was the pick of the bunch so far, Sánchez chipping over the top of the defence wide to Leonardo Senatore who fed Rodrigo Báez on his inside for a sensational score.

Zeilinga halted the flow of points against the Cheetahs with two penalties to open up a lead of 30-24 as tempers threatened to boil over.

But then came the pivotal moment – Landajo finishing off a wonder try which all stemmed from the huge run by the replacement Matías Orlando, breaking through tackles up the field before flicking a pass out of the back to the scrum-half to race over.

That converted score put the Jaguares ahead for the first time at 31-30, and a snap drop goal from Sánchez extended the advantage.

Neil Marais struck a penalty over in response as tired legs on both sides threatened to create a lapse in either defence.

The Cheetahs did have possession when the hooter sounded, but a Jaguares penalty secured an incredible win, and a real statement too from the Jaguares in Bloemfontein. 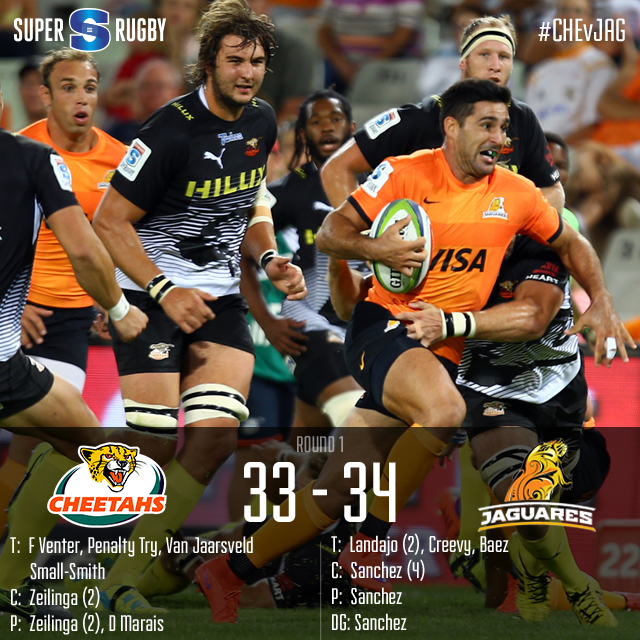