The Jaguares produced an excellent display to boost their play-off hopes following a 28-20 win over the Hurricanes in Wellington on Friday.

As expected, this was a fast-paced and entertaining affair with both sides giving the ball plenty of air but the visitors were deserved winners in the end as they outscored the Hurricanes by four tries to three.

For the Jaguares, Agustin Creevy, Jeronimo De La Fuente and Julian Montoya crossed the whitewash and they were also awarded a penalty try while Joaquin Diaz Bonilla slotted three conversions.

Vaea Fifita, Ngani Laumape and Kane Leaupepe scored tries for the Hurricanes and Jordie Barrett added a conversion and a penalty.

The result means that the Jaguares have won five out of their last six matches with their only blip being last weekend’s narrow defeat to the Highlanders in Dunedin. The Buenos Aires-based outfit are now sitting pretty at the top of the South African Conference standings.

The home side made a terrific start and took the lead as early as the first minute when Fifita dotted down in the left-hand corner after a mazy run from Barrett in the build-up.

The next 15 minutes saw both sides running the ball from all areas of the field but with little reward. The Jaguares eventually drew level courtesy of a penalty try after a Bonilla grubber kick was punched away by Barrett over the dead ball line – an action for which the All Black utility back was yellow-carded.

Despite their numerical disadvantage, the Hurricanes did well not to concede points during Barrett’s stint on the sidelines but shortly after he returned to the playing field, Creevy crossed for a deserved try off the back of a lineout drive deep inside Hurricanes territory.

Barrett narrowed the gap with a penalty on the half-hour mark but five minutes later the visitors struck back with a well-taken try from De La Fuente, which gave them a 21-8 lead at half-time.

Just like the first half, the Hurricanes were fastest out of the blocks in the second stanza and 10 minutes into the half Laumape went over for their second try but once again they failed to convert.

That proved costly as it meant they were trailing by eight points and the Jaguares extended their lead when Montoya went over for their fourth five-pointer in the 66th minute, before Leaupepe scored a consolation try for the home side in the game’s closing stages. 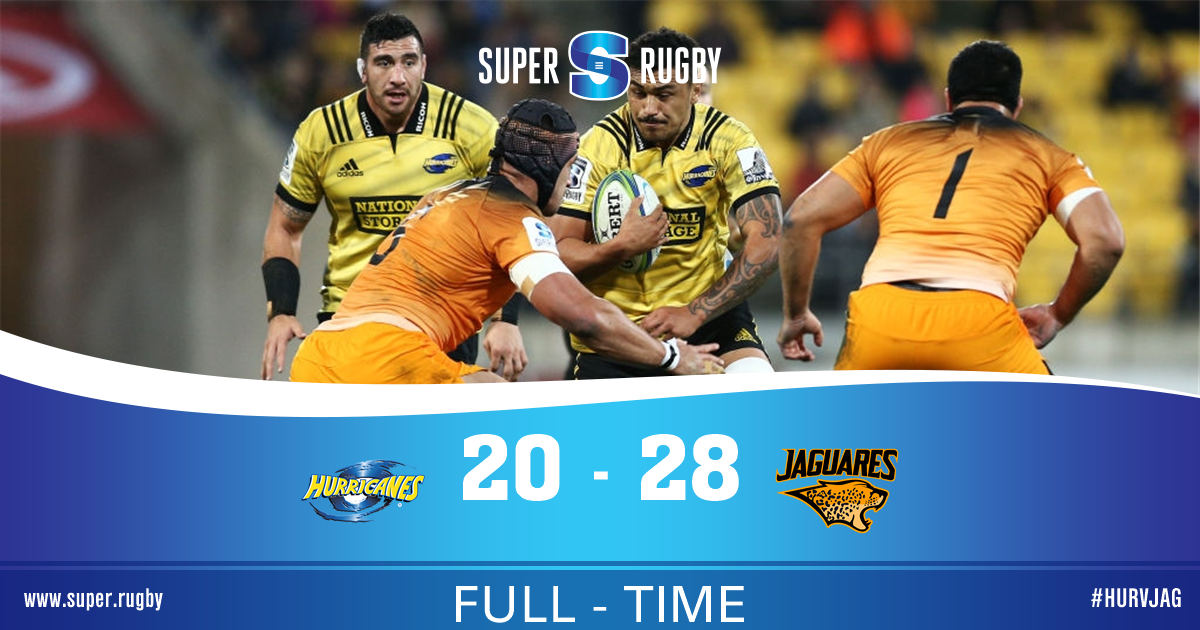