The Jaguares avoided a second home defeat with a hard-fought 27-12 win over the Bulls at Buenos Aires on Saturday.

Fresh from a 40-3 win over the Stormers, the Bulls headed into the fixture excepting to build on their impressive performance.

The Pretoria-based side would have particular fancy their chances against the Jaguares who came from their first defeat to the Lions on home soil.

Instead, it was the hosts who produced a more clinical performance in wet and difficult weather conditions. That attacking flair and momentum the Bulls had on a sun-baked Pretoria pitch was nowhere to be seen on the sodden Buenos Aires field with rain falling throughout the match.

Scoring three tries and conceding none earned the Jaguares a bonus point and lifted them from the bottom of the table to seventh place in the overall standings.

There was very little separating the two sides during the first half as the Jaguares took a narrow 7-3 advantage to the lockers.

Following a missed penalty by Joaquin Diaz Bonilla, Jaguares got on the board courtesy of amazing individual effort by Matias Orlando. The centre broke a few tackles and before diving over the chalk for the first five-pointer. Flyhalf Diaz Bonilla stepped up to add the extras for the early 7-0 lead.

In response, the Bulls could only cough up a single penalty kick from Pollard after 40 minutes of play.

In the second half, the two flyhalves, Pollard and Joaquín Díaz Bonilla traded penalties before the Bulls took the narrow 12-10 lead thanks to two additional  penalty kicks just before the hour mark.

Celebrations were shortlived for Pote Human’s men as the Jaguares scored their second try of the match.

The hosts had an attacking five-meter line-out and from the back of a driving maul, Rodrigo Bruni powered over the line for the five-point buffer.

From the restart, the Bulls conceded a penalty and 29-year-old Argentina intertantional made no mistake to extend the lead to 20-12.

The Jaguares finally put the match beyond the Bulls’ grasp as great pace and quick interplay by the backline saw Bautista Delguy dived over the line for the third try. Diaz Bonilla added the easy extras for the bonus-point win.

It was the first success under new coach Gonzalo Quesad, who was appointed during the close season when former Argentina hooker Mario Ledesma was promoted to take charge of the national team, Los Pumas.

“We adapted well to the wet conditions and deserved the victory,” said Jaguares captain and centre Jeronimo de la Fuente, who succeeded Pablo Matera as leader for this season.

“Lessons were learnt from our loss to the Lions last weekend and everyone played with passion, giving the Bulls no time to settle into a rhythm.”

Bulls skipper and lock Lood de Jager said: “We were confident of following up our great start to the season with another win and cannot offer the slippery conditions as an excuse.

“Both sides were equally affected by the rain and the simple truth is that the Jaguares adapted much better than we did.” 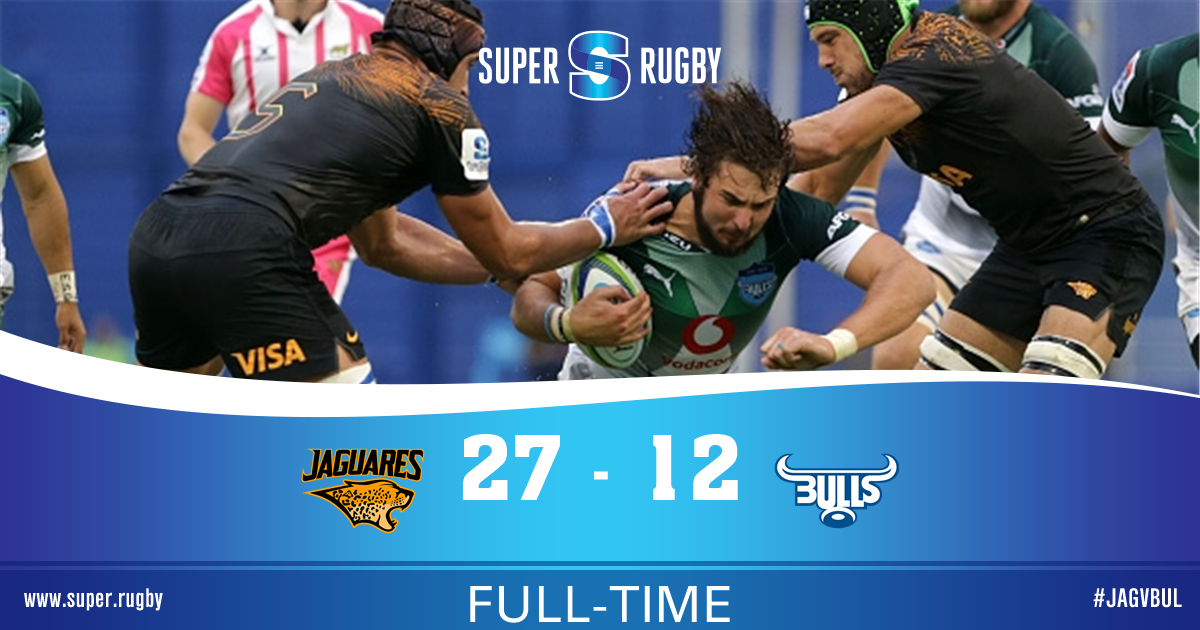 For the Bulls
Pens: Pollard 4